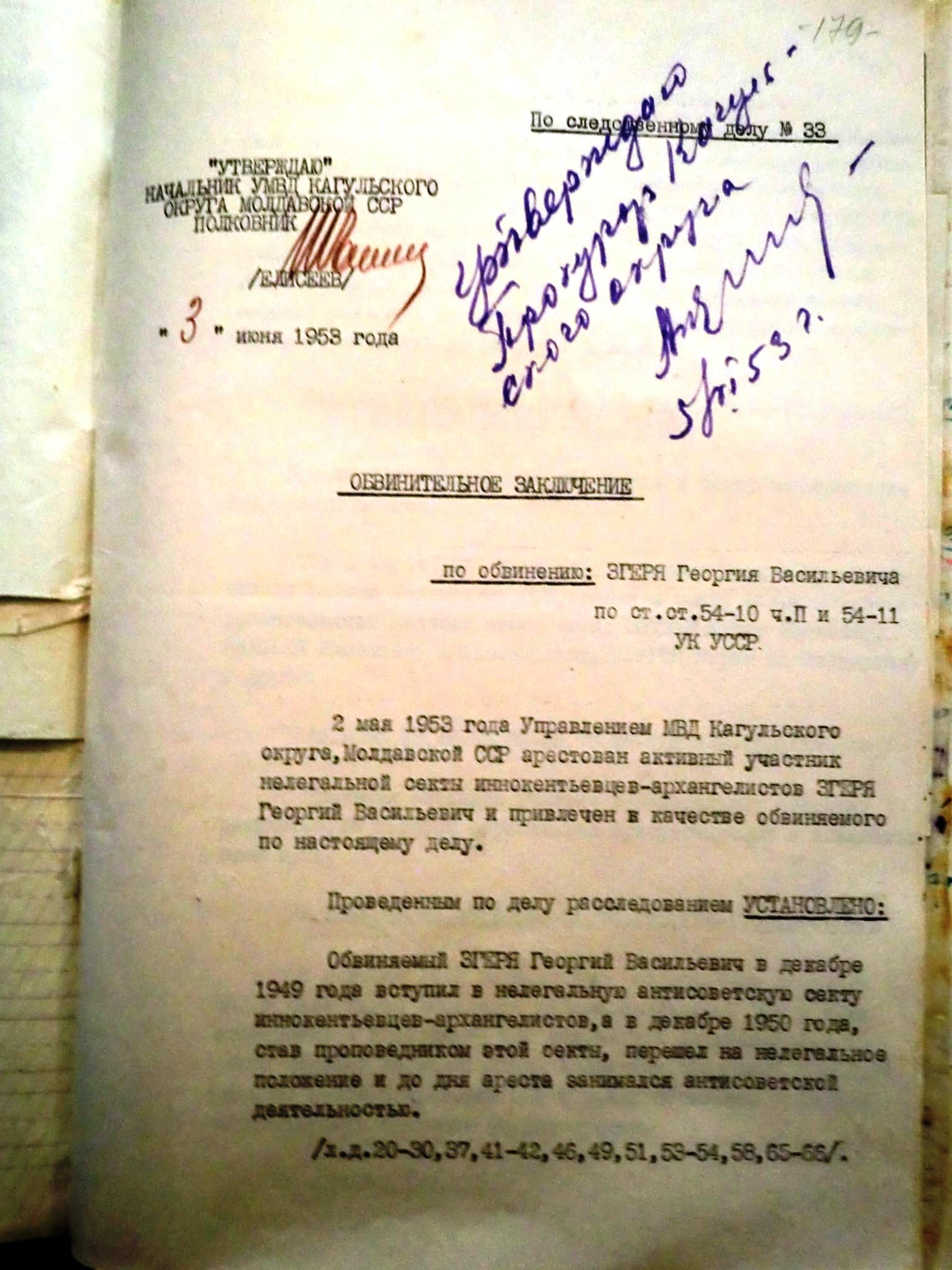 The official accusatory act concerning the case of Gheorghe Zgherea (case No. 33/ 023262) was issued on 2 June 1953 by the senior investigator of the Inquiry Section of the Cahul District Directorate of Internal Affairs, Captain Vorobiev, and approved by the Head of the Directorate, Colonel Eliseev, the next day. This document summarised the main “anti-Soviet” activities undertaken by Zgherea, who was labelled an “active participant in the anti-Soviet illegal sect of Inochentists-Archangelists.” The defendant’s “anti-Soviet” activities purportedly began upon his entering the Inochentist community in December 1949 and acquired a systematic character after December 1950, when he became a preacher and “went underground” [pereshel na nelegal’noe polozhenie]. Zgherea was specifically accused of “roaming through the villages of Vulcănești, Strășeni, Kotovsk, and other districts of the Moldavian SSR” and engaging in “systematic anti-Soviet agitation” through “using the religious prejudices of the believers.” He attempted to persuade his peasant audience to “refrain from taking part in the social-political life of the country, to boycott the elections for the institutions of Soviet power, tried to convince the village youth not to join the Komsomol” and appealed to the members of the collective farm not to work in the kolkhoz [on Sundays and religious holidays]. Interestingly enough, the religious thrust of Zgherea’s message was minimised by the authorities. The main emphasis was on the disruptive social and political consequences of the defendant’s and his fellow preachers’ propaganda. Another serious count of indictment referred to Zgherea’s “co-option of new members into the sect,” as well as to his “taking active part in the illegal gatherings of the sect members,” where he presumably spread his anti-Soviet views among those present. The Soviet authorities were alarmed not only by the existence of these “anti-Soviet views” as such, but also by the parallel underground structure of the Inochentists, which represented a direct threat to the stability of the regime in rural areas, still under tenuous central control during the immediate post-war years. According to this document, Zgherea’s “guilt” was confirmed not only by the defendant’s own confession, but also by the witness accounts and testimonies. Apparently, Zgherea had no papers or personal belongings (aside from two photos found during his arrest), thus confirming his marginal and “underground” status. It should be emphasised that Zgherea’s case was only one of several trials against prominent members of the Inochentist community (some of them belonging to Zgherea’s immediate network) which took place in late 1952 and early 1953. Thus, the defendant was only one victim of the concerted campaign of the authorities against the Inochentists, aimed at destroying their clandestine structures throughout the MSSR. This probably explains the very harsh verdicts issued against Zgherea and his co-religionists. As in other similar cases, the accusatory act was later used as the basis for the official sentence in this case.