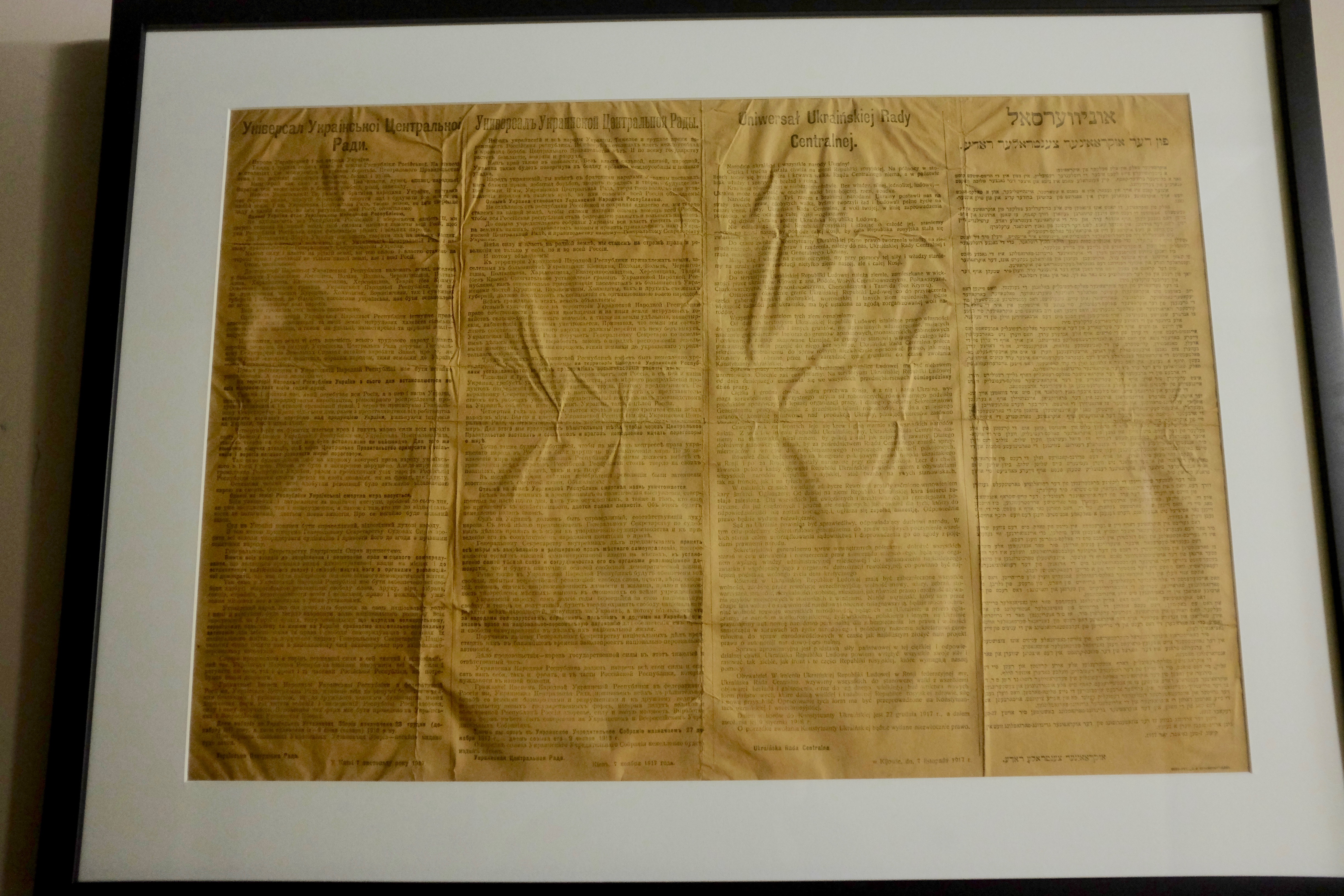 The events that transpired alongside the fall of the Romanov monarchy in February 1917, the takeover of the Winter Palace by the Bolsheviks in October 1917, and the dissolution of the Constitutional Assembly in January 1918 are immensely significant for understanding Ukrainian history and cultural opposition to communism. During that year of upheaval, many divergent visions for the future were articulated throughout the Russian Empire. In the Imperial Southwest, the Bolsheviks battled monarchists, nationalists, socialists, greens and anarchists over how to move forward during and after the collapse of empire.

The Ukrainian Museum-Archives has in its possession an original broadside of the Third Universal, issued by the Central Rada on November 20, 1917, in the four major languages used in the Imperial Southwest—Ukrainian, Russian, Polish and Yiddish. This document is reflective of efforts by the Central Rada to appeal to various communities living on the territory, while negotiating with the Provisional Government for greater autonomy. As historian George Liber notes, the first two proclamations of Rada did not define the borders of Ukraine, but the Third Universal asserted that the nine provinces in the Imperial Southwest with Ukrainian majorities belonged to the Ukrainian National (or People’s) Republic. The document also claimed parts of Kursk, Kholm/Chelm and Voronezh provinces, where Ukrainians also constituted the majority. The Central Rada also pledged to defend the interests of all national groups living in these territories and articulated a law protecting personal and national autonomy for Russians, Poles, Jews and others.

Shortly after this, the UNR established diplomatic ties with a number of European countries and even the United States. Britain and France tried to persuade the UNR leadership to side with them against the Central Powers, which they refused as they were determined to stay neutral. The Soviet Russian Republic initially recognized the UNR, but this was short-lived as the Red Army soon moved in from the north and east. This prompted the Rada to issue the Fourth Universal on January 25, 1918, which declared independence of the UNR as defined by the Third Universal. This made the push for greater autonomy within the context of empire a war of nationalist secession. (Liber, 62-63)

These early conflicts helped shape Soviet Ukraine’s relationship to Moscow for decades to come. In fact, Ukraine’s cultural, political and economic leadership struggled to define the parameters of engagement. Figures who were at the forefront of creating Soviet culture in the political and creative domains had to contest with the complex legacies of the Civil War of 1917-1922, which were never really fully resolved. Republican officials in particular (first in Kharkiv and later Kyiv) found it difficult to strike the right balance between autonomy and central control, regularly finding themselves on the wrong side of cultural policy after major shift in the priorities of Moscow.