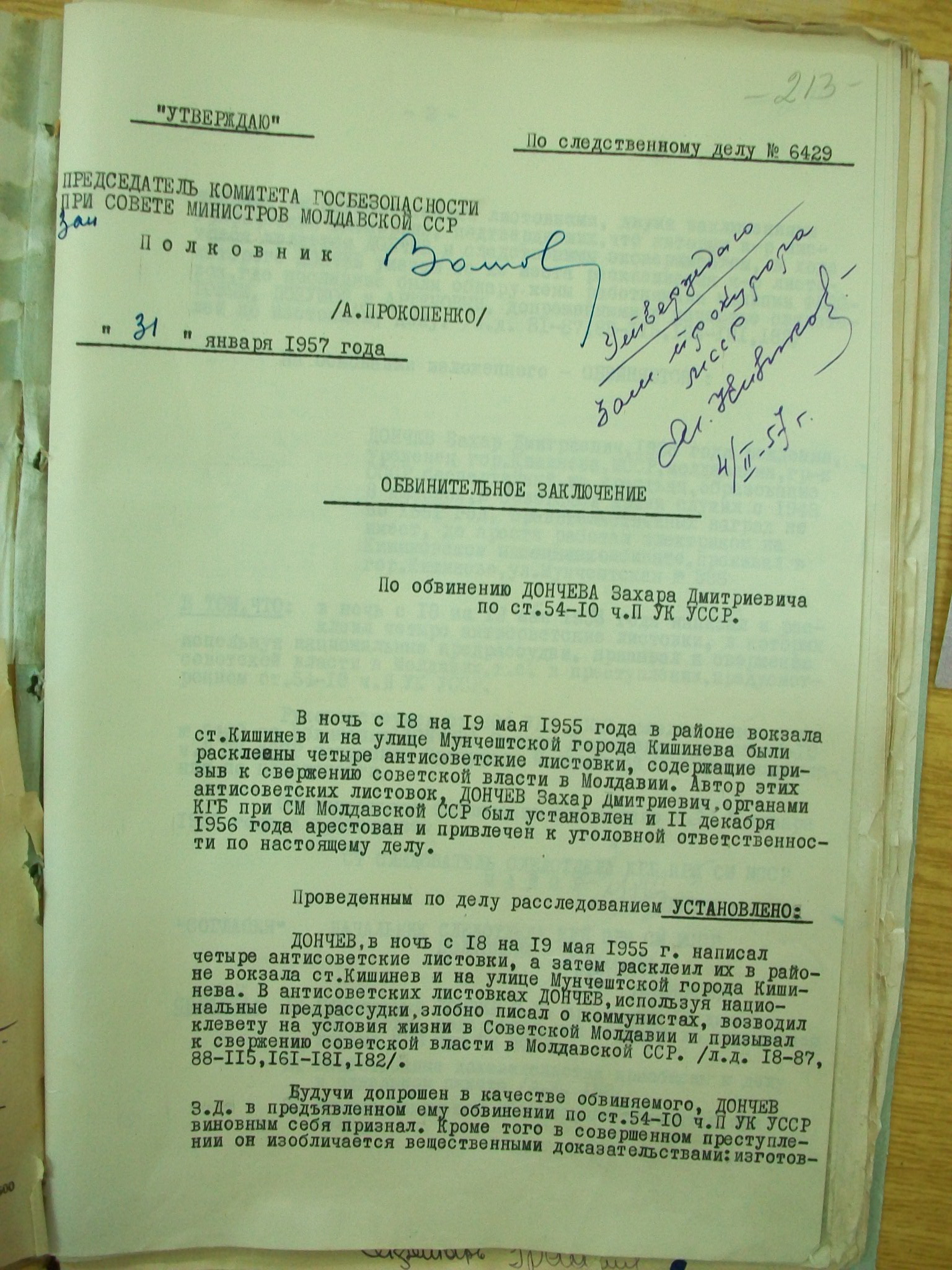 The official accusatory act concerning the case of Zaharia Doncev (case No. 6429) was issued by the KGB investigator Major Gurkin on January 31 1957, when it was approved by the head of the local KGB, Colonel Prokopenko. The document provided a short narrative of the events that occurred on the night of 18/19 May 1955, emphasising that the anti-Soviet leaflets produced by Doncev “contained an appeal to overthrow Soviet power in Moldavia.” According to the official accusation, Doncev, “making use of national prejudices, viciously attacked the communists in his text, propagating calumnies concerning the living conditions in Soviet Moldavia, and made an open appeal to overthrow Soviet power in the Moldavian SSR.” Doncev’s guilt was purportedly proven not only by his own confession, but also by material evidence, including by the leaflets themselves, by the results of the expert analysis confirming Doncev’s handwriting, as well as by the reconstruction of his acts, during which he correctly identified the locations of the leaflets’ distribution. Based on these conclusions, Doncev was accused of counterrevolutionary anti-Soviet agitation, under Article 54, paragraph 10, part 2 (“propaganda or agitation containing appeals toward overthrowing, undermining or weakening Soviet power”) of the Criminal Code of the Ukrainian SSR. The accusatory act was then sent to the Prosecutor General of the Moldavian SSR. The annex of this document contained a list of the persons who were to be summoned to the court hearing, including the accused and the four main witnesses. It is revealing that the accusatory act did not explicitly mention the earlier charge of fomenting nationalism and threatening the territorial integrity of the USSR (article 2 of the Criminal Code of the Ukrainian SSR), which would have aggravated the plight of the accused. However, the latter article was indirectly invoked in the sentence, leading to Doncev’s condemnation to a seven-year prison term. The accusatory act is much less detailed than the similar documents produced in the late 1960s and early 1970s, pointing to the failure of the Soviet authorities to uncover an extended “network” around the main defendant and the fact that he was acting alone. However, the emphasis on “national prejudices” hints at the awareness of the danger of “local nationalism” and foreshadows the “anti-nationalist” campaigns launched by the party leadership, in a significantly different context, in the late 1960s. The severity of Doncev’s punishment was to underscore the reassertion of central control after the temporary weakening of the repressive apparatus during the events of 1956.

Cașu, Igor. 2014. ”The Quiet Revolution:” Revisiting the National Identity Issue in Soviet Moldavia at the Height of Khrushchev’s Thaw (1956).” Euxeinos: Governance and Culture in the Black Sea Region 15-16: 77-91.