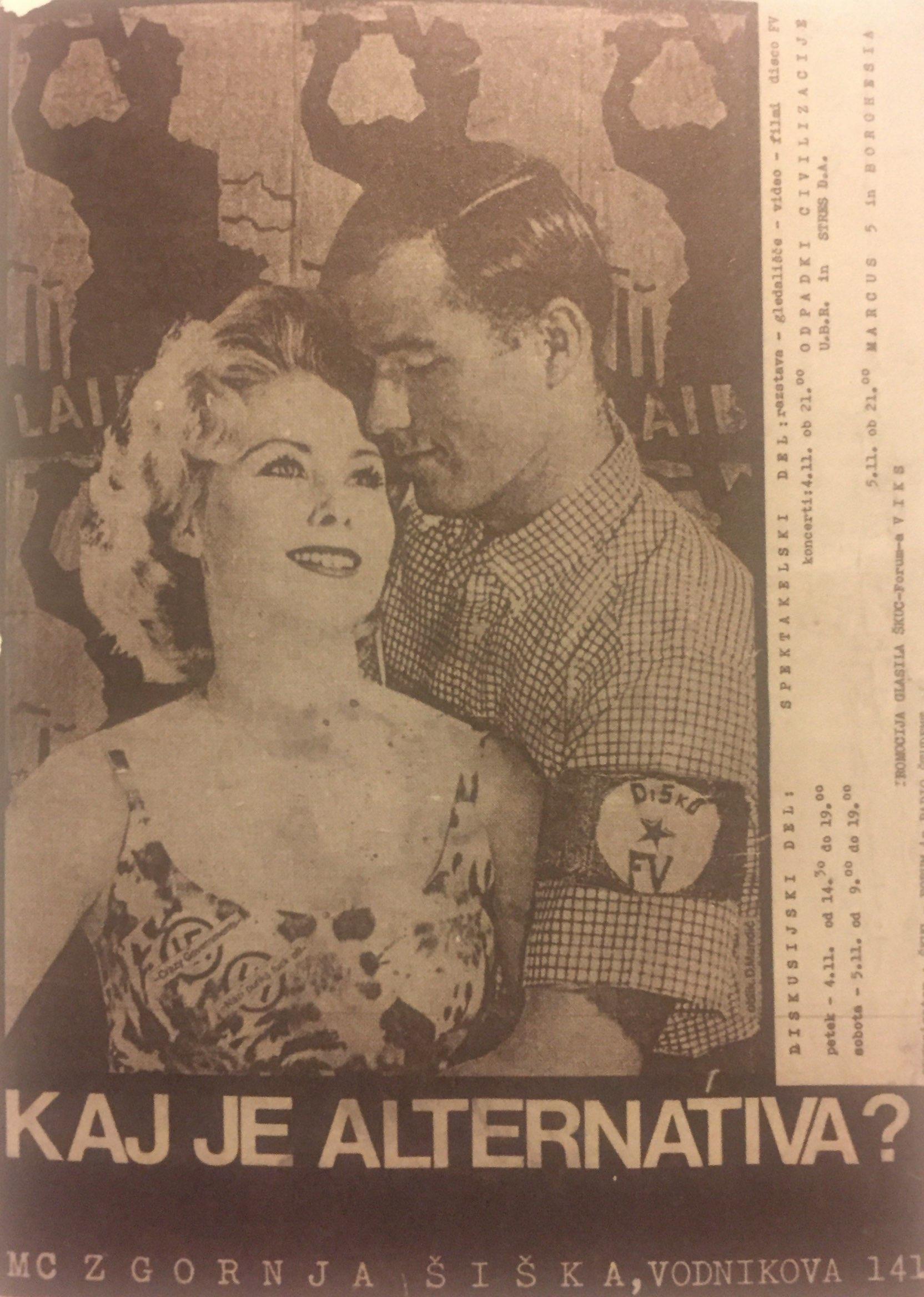 The event Kaj je alternativa? (What is the alternative?) was organised by the FV group in Šiška Youth Centre in Ljubljana. In May 1983, the FV 112/15 group entirely moved its social activities from Disco Študent, situated in the basement of Building IV in the Rožna dolina student dormitory complex, to the Šiška because the authorities were exerting pressure on them. The poster was designed by Dušan Mandić, later a member of the Irwin group and Neue Slowenische Kunst.

Mandić’s design for the poster, which advertised the event, combined aspects of the aesthetics of the FV group and the band Laibach, with elements appropriated from socialist aesthetics mixed ambiguously with elements of petit-bourgeois romanticism. The poster underscored the FV brand, reproducing in the background a Laibach woodcut, the Metalworker, along with the band’s name (Laibach), which was prohibited at that time because of a crossed-out swastika, and slogans. This poster earned Mandić a visit from the police, which arrived with a search warrant, although Mandić was never prosecuted in court for it. Mandić says that the poster was made because Igor Vidmar, who wore two badges with anti-fascist content but decorated with swastikas on them, was imprisoned for two months. Mandić also included the problematic badges on the poster, and this was the reason why the police questioned him. At the police station, he stated that he was only a contractor, since the League of Socialist Youth of Slovenia and Radio Student has commissioned the poster and, therefore, they should be placed in custody.

Soon cultural theory came to the defence of the subculture for the first time. The poster was even printed in Mladina in a somewhat censored form, but it appeared in full in the first issue of the alternative publication Viks. The event What is the alternative? was organised as a theoretical symposium, featuring some of Slovenia’s most prominent contemporary theorists, artists and cultural figures, such as Slavoj Žižek, Rastko Močnik, Lev Kreft, Pavle Gantar, Iztok Saksida, Dušan Mandić, etc. Some people were disappointed because the debate remained at the theoretical level and did not address some of the real issues that the alternative scene was grappling with, such as battles over space or the legal problems faced by the band Laibach. The event What is the alternative? revealed certain other internal contradictions within the alternative scene.