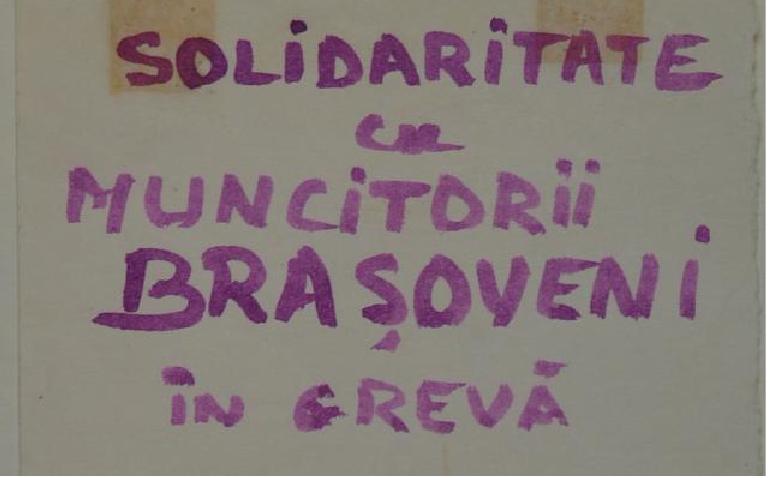 After sending two open letters to RFE in the period 1982–1983 and discussing with her students texts by Paul Goma and Mircea Eliade which were not officially published in Romania, Doina Cornea was put under close surveillance and threatened by the Securitate, in order to make her give up her oppositional activities. In June 1983, she lost her teaching position at the University of Cluj because she had refused to cede to these pressures. Despite these repressive measures against her, Cornea continued to send open letters of protests and to show solidarity with other dissidents in Romania (Cornea 2009, 176–177). Among these acts displaying solidarity with other oppositional activities, those supporting the 1987 workers revolt from Braşov attracted the most violent reactions on the part of the Securitate.

In November 1987, Cornea learned of the Braşov workers’ revolt from RFE radio programmes. Immediately afterwards she displayed a placard in front of her house in Cluj through which she expressed her solidarity with the workers. On 18 November 1987, she drafted 160 manifestos written in violet ink on sheets of paper similar to A5 format with the text: “Solidarity with the workers from Braşov” (ACNSAS, P 000 014, vol. 2, f. 109). These manifestos were spread with the help of her son Leontin Horaţiu Iuhas in various public spaces in Cluj, namely in the main squares and in factories (Cornea 2009, 194–195). On 19 November 1987, Cornea and her son were arrested by the Securitate and its employees conducted a detailed home search (Cornea 2006, 203). On this occasion the ink with which these documents were written and some copies of the manifestos were confiscated. The latter would be attached to the criminal file and invoked as proofs of the accusation during Doina Cornea’s interrogation by the Securitate in late November 1987 (ACNSAS, P 000 014, vol. 2, f. 109).