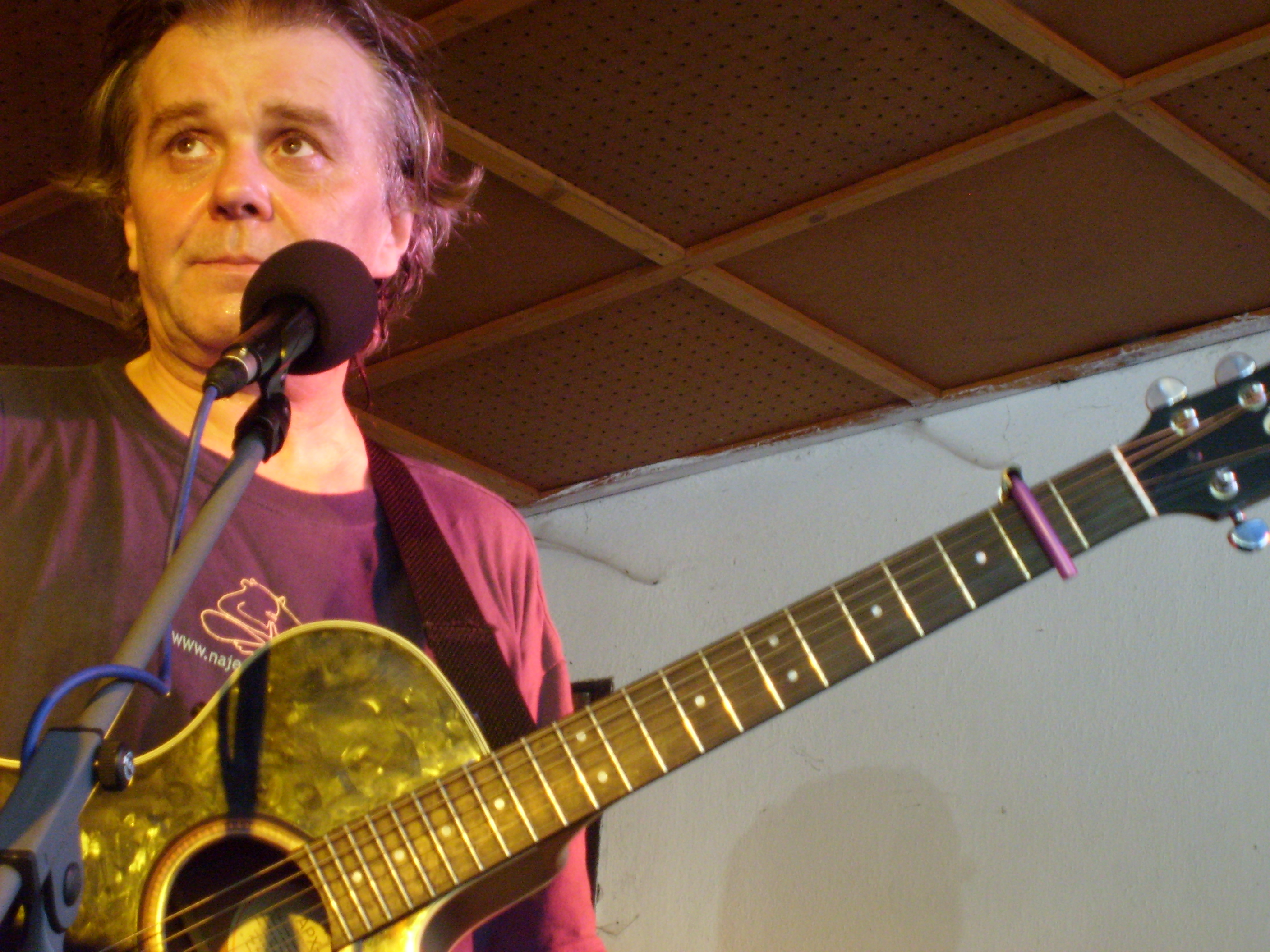 Vlastimil Třešňák is a Czech musician, folk singer, writer and artist. He started performing in the second half of the 1960s. He was a member of “Šafrán”, a voluntary association of singers and songwriters, which between approximately 1972 and 1978 covered a group of folk musicians in Czechoslovakia until it was broken up by the State Security at the end of the 1970s. Alongside Třešňák, the group’s members included Vladimír Merta, Vladimír Veit, Dagmar Andrtová-Voňková and Jaroslav Hutka. Třešňák came into conflict with the regime during 1970s. He was involved in “apartment theatre” – acting alongside Vlasta Chramostová and Pavel Landovský in private theatre productions in the dissident community. “Play Macbeth”, a play by Pavel Kohout, had around 30 productions and was also recorded on video by the cameraman Stanislav Milota; the recording was secretly transferred to the West and broadcast in Austria by ORF. Třešňák, together with Olga Stankovičová (the wife of the underground poet Andrej Stankovič), Olga Havlová and Jarmila Bělíková, started a library called “Hrobka” (Tomb) in the flat of the Stankovičs; they collected and lent out more than five hundred books. They also published several issues of the samizdat magazine “Nový brak” and organised carnivals. Třešňák became a target of State Security repression, including the operation “Asanace”, which aimed to force out him and other dissidents from Czechoslovakia after signing Charter 77. After violent interrogations, Třešňák decided to go into exile in 1982 – at first to Sweden and then later to Germany. Shortly before 17 November 1989, he took part in a joint concert of Czechoslovak songwriters in Wrocław, Poland, and returned from exile after 1990. Třešňák is the author of several short stories and novels. His lyrics and other texts were published in samizdat volumes (e.g. in the “Petlice” and “Expedice” editions), together with LPs, also in exile. His album “Zeměměřič” (1979) was originally released by the Swedish exile publishing house of Jaroslav Pallas, called “Šafrán 78” in a re-edition in 2010. In the second half of the 1990s, Vlastimil Třešňák took his former State Security investigator to court for using violent interrogating methods; the policeman received a suspended sentence.