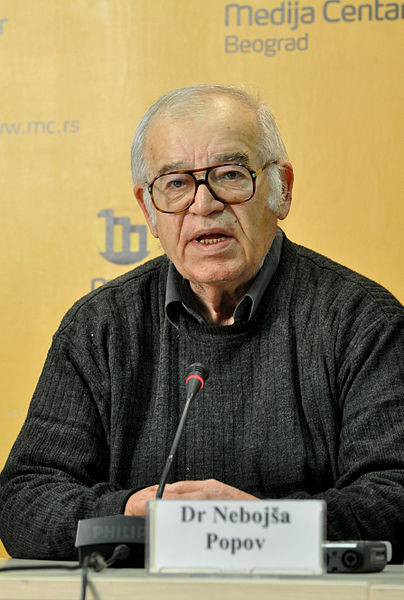 Nebojša Popov (1939-2016) was born in Zrenjanin, where he completed elementary and secondary school. He came to Belgrade in 1958 to study at the Faculty of Law. Immediately after completing his studies, he was employed at the Djuro Salaj Workers’ University (a school for the education of workers. Then he transferred to the Faculty of Philosophy, where he worked as an assistant in the Department of Sociology. Even in his early days, Popov was politically engaged. As a high school student, he became a member of the League of Communists. He left the League in 1970, when authorities attacked freedom of the press. He explained this as follows:

“Once, I attended such a meeting, in the postgraduate organization at the Faculty of Law. After several of us opposed the brutal suppression of press freedom, the majority supported the official proposal. At this time, a cabaret scene was performed. The chairperson, Milan Milutinovic, proposed a concluding commission, left briefly, and very quickly returned to announce: ‘In the spirit of democracy in our party, different opinions were heard, and most of the proposals were adopted.’ It was my last party meeting, I felt like a puppeteer that entertained the audience while the puppeteers did their work; I dropped out quietly, after 12 years, without the ceremonial return of the booklet of party membership, etc.” (Popov, Kako Smo Dospeli Dovde - Peščanik. 2016).

In 1975, Nebojša Popov was removed from the faculty, along with seven other professors (see more in Groups). This instance is a key example of how repressive actions of party authorities affected life at Belgrade University in the mid-1970s.
Due to problems in Belgrade in 1976, Popov was forced to complete his doctoral degree  at the Faculty of Philosophy in Zagreb.
Six years later, Popov became director of the Center for Philosophy and Social Theory, where many other displaced professors from the Faculty of Philosophy were also employed. The Center later became an independent institute where Popov spent most of his working life. At the beginning of the 1980s, Popov was arrested and sentenced to 25 days imprisonment as a member of the so-called “petition movement” that supported the Polish movement Solidarity.

Popov also was very active outside scientific institutions. He was secretary of the magazine Praxis, member of the board of the Korčula Summer School, and one of the initiators of the Winter Philosophical Encounters (Tara, Vrnjacka Banja and Divčibar). Popov organized a series of non-institutional gatherings for sociologists and philosophers in Cres, Lošinj, and Komiza. He was also one of the organizers of the 'Open University', in which the intellectual opposition gathered together in private homes in Belgrade.

Popov was one of the founders of the 'Association for Yugoslav Democratic Initiative' (UJDI) in 1989, the first democratic political organization in Yugoslavia that sought to reform the Yugoslav system. He was President of the Republican Club and member of the Main Board of the Civic Association of Serbia. He worked as the editor of the weekly 'Republic' - from 1990 to 2010. For his editorial work and writing, he received several prestigious awards.