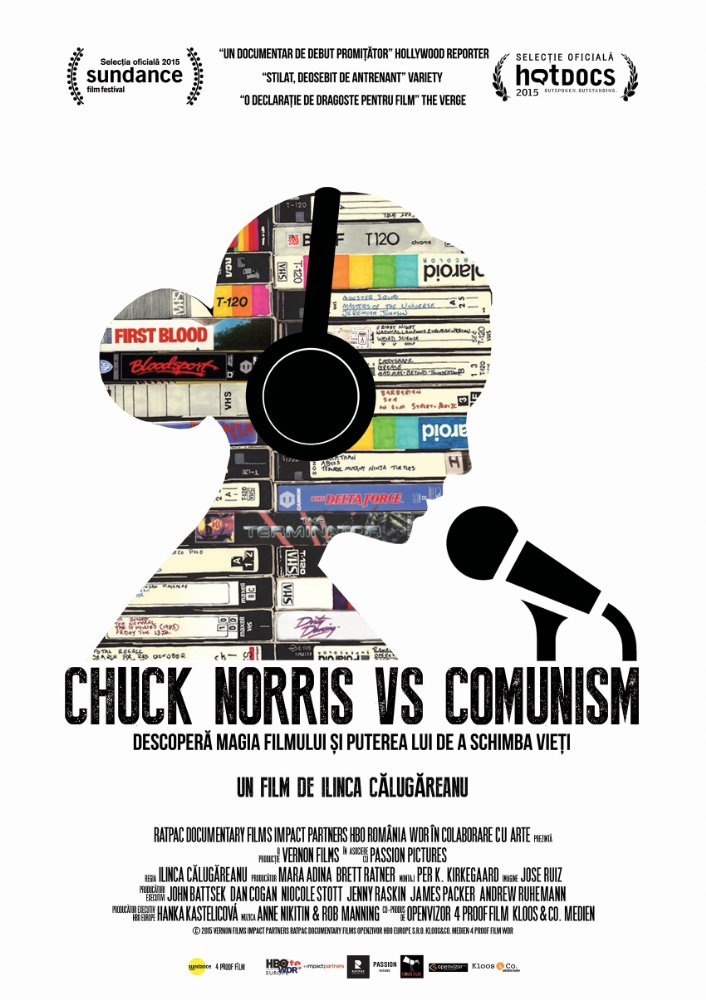 Chuck Norris versus Communism is a documentary film made in 2015 as a Romanian–British co-production. Written and directed by Ilinca Călugăreanu, the film suggests that the films brought from the West and distributed (semi)clandestinely on video cassettes contributed to the fall of the regime of the dictator Nicolae Ceauşescu. Indeed on the IMDb website, the film is summed up in the words: “The VHS revolution that brought down a communist government!” Of course this claim, which essentialises the clandestine activity of procuring, translating, and distributing Western films, but neglects the complex of internal and external factors that led to the fall of communism in Romania and in five other communist states in 1989, is an exaggeration. More appropriate is the promotion of the film using the formula: “A documentary about the magic of film and the power it has to change lives.” This obviously paraphrases the comment made by Tom Hanks about this film, in a note on his Facebook page that went viral: “See this documentary! The power of film! To change the world.”

Better even than the advertising slogan, this succinct commentary synthesises the essence of the activity of cultural opposition reconstructed in the documentary. More exactly, the film tells the story of the entire circuit of the video cassettes, as it became routine and turned into a mass phenomenon in the last years of the communist period. The video cassettes were first imported clandestinely from the West. Films also procured clandestinely from the West were recorded onto them, then dubbed in Romanian, and, finally they were multiplied and distributed (semi)clandestinely throughout Romania. The film gives the comments of many of those who watched these films in the 1980s about the significance they give to this activity that absorbed very diverse categories of people who were in search of an alternative cultural space. The principal character of the film is, however, Irina Margareta Nistor, who translated and dubbed with her own voice the vast majority of the Western films that circulated on video cassettes. For this reason, her voice constitutes a symbol of this whole cultural activity, which appeared as an alternative to the official television schedule, which was reduced in the late 1980s to just two hours per day of broadcasts, principally connected to the political activity of the party and of Nicolae Ceauşescu. In the film, Irina Margareta Nistor is played by the actress Ana Maria Moldovan. In an interview she gave for a publication in the field, the actress says: “I tried to represent Irina as I perceived her and felt her then. Her voice is indeed known to many Romanians and it is not easy to imitate. It is possible to learn, to exercise her way of phrasing, the pauses that she uses naturally and certain words that she uses more often.”

The intrigue of this documentary film is summed up by the director Ilinca Călugăreanu in an article in the newspaper Adevărul de Cluj-Napoca: “In 1985, Irina Margareta Nistor, a young translator at the national television, met a mysterious entrepreneur. He was smuggling, copying, and distributing films on VHS cassettes. This was the start of a working relationship that lasted for more than a decade. In total, Mrs Nistor says that she dubbed more than 3,000 films. Thanks to her, Chuck Norris, Jean-Claude Van Damme, and Bruce Lee became popular heroes in Romania. At a time when the Romanian state controlled every aspect of the lives of its citizens – including food, heat, transport, and information – people found through the power of films a way to escape and to resist the oppressive regime of the state.” And she adds, with reference to the title of her film: “Chuck Norris wins in the end – of course: it’s a film with a happy ending. The pirated cassettes turned Irina’s voice into a symbol of freedom, and Chuck Norris, Van Damme, and Bruce Lee into national heroes, and they helped a whole country to stand up to a brutal regime.” It is interesting to note that the films with Chuck Norris were not typical of this cultural phenomenon, but his name is an allusion to the martial arts films, which were one of the types of “consumer” films that circulated on video cassettes. In other words, the title suggests that it was not the message of the films that was subversive, so much as their Western provenance itself and the (semi)clandestine circulation of the cassettes.