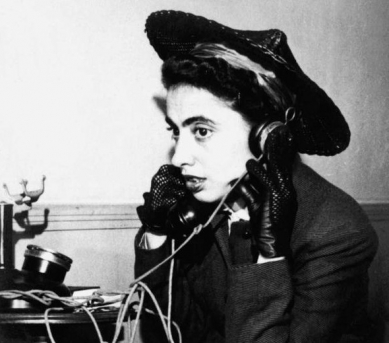 Monica Lovinescu (1923–2008) was one of the most important figures of the Romanian exile community, who dedicated her entire life and activity to supporting dissidence against the communist regime. Her work as an exiled literary critic, writer, translator, radio broadcaster at RFE, and journalist not only revealed the existence of Romanian dissidents but also presented them as models of unquestionable moral and human dignity who could be emulated by those who would eventually decide to “live in truth.” She was born on 19 November 1923 in Bucharest, the daughter of Eugen Lovinescu, a well-known literary and cultural critic of interwar Romania, and Ecaterina Bălăcioiu, whose old landowner family had connections to the royal court. From an early age, Monica Lovinescu not only became familiar with the intellectual environment of the time but also enjoyed the company and friendship of many Romanian intellectuals who usually gathered in her father’s house for meetings, public readings, or literary debates (Crăciun 2009, 279).

Her anti-communist convictions became visible immediately after the end of the World War II and the establishment of a communist-dominated Romanian government under the leadership of the "fellow traveller" Petru Groza. She joined other young people who gathered in Bucharest to celebrate King Michael I’s name day (8 November 1945) and manifest their support for the Romanian monarchy, an institution which resolutely stood against the menacing communist takeover. In May 1947 Monica Lovinescu represented her faculty at the Students’ Congress, a congress which the communists hoped to use to purge professors who were hostile to the new political regime. She successfully counteracted this plan and put an end to the discussions by singing the Royal Hymn (Burlacu 2014, 35).

In the same year of 1947, Lovinescu left Romania at age of twenty-three after receiving a French Government scholarship. The forced abdication of the King Michael I and the subsequent proclamation of the Romanian People’s Republic were soon followed by the breaking up of cultural relations between France and Romania. Thus, Monica Lovinescu and other Romanian students (including her future husband, Virgil Ierunca) lost their scholarships and although the communist authorities ordered them to return home, they applied for political asylum and some of them, including Lovinescu, started a long life in exile (Stan 2010, 684–686).

This first wave of exiles considered communist rule in Romania to be temporary and hoped that a military intervention by the Western powers would soon free the region. Thus, their efforts were directed towards raising the awareness of public opinion about the real situation in Romania. Monica Lovinescu joined this effort by translating into French Adriana Georgescu’s memoires from her time in prison, La început a fost sfârșitul (At the end was the beginning), in an attempt to inform the Western world about the terror and repressive measures employed by the Romanian communist regime against any form of protest and resistance. The French translation of the volume was published in 1951 at the Hachette publishing house. Also, in 1951, she began her collaboration with Radio Paris, but her contributions were limited to reading announcements or literary reviews under a pseudonym in order to protect her mother, who had remained in Romania. The following year she married Virgil Ierunca, who also became a critic of the communist regime in Romania (Vladimirov 2012, 16; Vladimirov 2011, 312).

The death of her mother in June 1960 in the Văcărești prison after an imprisonment of two years under the false accusation of “hostile action against the social order” allowed Monica Lovinescu to engage herself in an open criticism of the Romanian communist regime (Vladimirov 2012, 18). In fact, the decease of Ecaterina Bălăcioiu sharpened her criticism against communism as she interpreted her mother’s death as being “an indubitable crime of the communist regime and a human sacrifice for her intellectual and political independence” (Crăciun 2009, 281). All the more so as the last message that Ecaterina Bălăcioiu sent to her daughter through one of the prison inmates mentioned that she was very proud of her daughter and of her work in exile. More importantly, the same message reassured Lovinescu that there were no reasons for her to be ashamed of her mother’s behaviour in prison, of her possible betrayal of friends under torture, as she mentioned that: “J’ai tenu bon, mon petit” (Vladimirov 2012, 75).

Monica Lovinescu started working at Radio Free Europe (RFE) in 1962, and in 1967 she launched two weekly programmes that focused on developments in European and Romanian cultural life (Crăciun 2009, 285). Her work at RFE also reflected a significant change in the general strategy of the Romanian exile community. After understanding during the Hungarian Revolution of 1956 that the Western powers would never engage in a war against the Soviet Union, the Romanian exile community concluded that only Romanians inside the country could overthrow the communist regime and thus, assumed the mission of supporting any domestic acts of resistance and opposition (Stan Snejana 2013, 138).

Monica Lovinescu’s broadcasts at RFE, Teze și antiteze la Paris (Theses and antitheses in Paris) and Puncte de vedere  (Points of view), which was part of the general news programme Actualitatea românească (Romanian cultural events), tackled primarily cultural topics. However, their anti-communist message underlined that resistance or dissidence in any communist regime was possible and desirable. At the same time, opposition was a necessary act of courage that should unite all for the greater common good, i.e., bringing down the criminal communist regimes. In particular, Lovinescu criticised Romanian intellectuals for failing to assume the role of community leaders in the struggle against communist party domination. Thus, considering the fight against the communist regime to be a personal and a moral duty, Lovinescu used the microphone of RFE to denounce political compromise, the collaboration of Romanian writers with the regime, their eager participation in promoting Nicolae Ceausescu’s personality cult, and their fight for power, for a better social status and higher official positions. She also condemned the “moral resignation” of some of the well-known writers, such as Tudor Arghezi, a poet who was first marginalised than recuperated by the communist regime, whom she criticised not for their literary works but precisely for their opportunism, for their compromise out of the temptation of benefits and fame (Burlacu 2014, 41–43, 52–56). Monica Lovinescu believed that it was difficult but not impossible for Romanian writers to refuse political compromise with the regime. Thus, in her broadcasts, she aimed at constructing an alternative cultural canon combining moral and aesthetic values and took every available opportunity to praise those writers such as Paul Goma and Marin Sorescu whose conscience and morality prevailed over material advantages (Crăciun 2009, 281, 288–289).

Monica Lovinescu also drew public attention to the cases of the Romanian dissidents and critical intellectuals who were persecuted by the communist regime, such as Paul Goma, Dorin Tudoran, Doina Cornea, and Dan Petrescu. She would regularly read texts by some of them during her broadcasts, hoping that these public stands would diminish the harassment which these individuals had to endure because of their critical attitudes. Lovinescu’s stance on this issue reflected the general strategy of the Romanian desk of RFE towards dissidence. Not only did RFE manage to break the official monopoly of information by broadcasting dissident writings for its listeners. It also ensured the safety of the dissidents by simply mentioning their names and cases to both a Romanian and a foreign audience (Petrescu 2013, 24–25, 33, 42).

Moreover, Lovinescu’s political activism also involved her in organising demonstrations or protests in front of the Romanian embassy in Paris, press campaigns, collecting signatures, and spreading memoranda in support of persecuted Romanian dissidents. These actions were coordinated through the RFE network. In the context of the worsening of the economic and political situation in Romania at the end of the 1970s and especially during the 1980s, Monica Lovinescu used her RFE broadcasts to denounce the politics of the Romanian regime and to praise those who had the courage to protest against him. Thus, in 1985 and 1986 she criticised Ceausescu’s so-called programme of systematisation which resulted in the destruction of many villages, as well as many historical areas and buildings in Bucharest for the sake of the new House of the People and the Victory of Socialism Boulevard. Lovinescu’s listeners also found out about the first major protests against the communist regime such as the miners’ strikes in the Jiu Valley in 1977 and the workers’ protest in Brasov in 1987, or about the Militia or Securitate’s repression of protests and acts of opposition in a flagrant violation of human rights (Crăciun 2008: 288–289; Vladimirov 2012, 136).

Monica Lovinescu was a person of strong character who rejected any compromise and any person who made compromises, just she refused to collaborate with the Securitate even though the price was saving her mother’s life. She replied to every intimidating message or offer to reach a compromise with the Romanian communist regime with a firm answer: “I won’t sell my conscience” (Vladimirov 2012, 67). The firmness of her criticism, the popularity she enjoyed among the Romanian audience, and her influence upon international public opinion motivated the Romanian authorities to organise press campaigns to undermine her credibility and reputation. The Securitate even ordered a physical attack against her in December 1977, which instead of silencing her triggered an international protest against the Romanian communist regime and its secret police (Crăciun 2009, 291, Vladimirov 2012, 130–133).

Monica Lovinescu’s contribution to the fight against communism was officially recognised in 2006 when the Romanian authorities acknowledged the role that she and her RFE broadcasts had had in keeping alive “the moral consciousness of the Romanians” (Mănescu 2012, 16). She died in April 2008 in Paris and her funeral urn was returned to Romania and buried in Fălticeni. She was decorated post-mortem with the highest national order, the Star of Romania, with the rank of Grand Officer (Vladimirov 2012: 31).