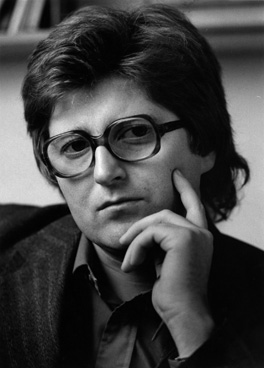 Gáspár Nagy was a Catholic poet and a well-known figure of the opposition in the 1980s. He was one of the first people to allude repeatedly and unmistakably to the 1956 Revolution in his poems. Several of his works were banned. He played a prominent role at the reburial of Imre Nagy in 1989.

Gáspár Nagy was born in a small village to a poor peasant family which was well-known for its firm religiosity and its loyalty to the Roman Catholic Church, even in the 1950s. He finished elementary school in Bérbaltavár and was admitted to the Benedictine Grammar School in Pannonhalma. Before he could start his studies in Librarianship and Community Education at the College of Szombathely in 1968, he had to work as an unskilled worker for one year. He began to publish poems in the journal of the college, from which he graduated in 1971. At around that time, he was targeted by the political police, which kept him under observation until 1989. Nagy began his career as librarian in Budapest. He later worked as an editor at Móra Publishing House. In 1981, he was elected to serve as the secretary of the Writer’s Union. He was forced to resign in 1985 as a consequence of a poem he published urging the reburial of his namesake, former Communist leader Imre Nagy, who was executed after the 1956 Revolution and buried in an anonymous grave. In 1985, he was made secretary of the Bethlen Gábor Foundation, and from 1988 to 2004 he served as editor of the journal Hitel (“Credit”). In June 1989, he was invited to recite his poems at the reburial of Imre Nagy. He headed the cultural section of the Hungarian Catholic Radio from 2004 until his death in 2007.

As Gáspár Nagy noted in an interview, he found the 1980s a very hard time in political terms. Several of his works were censored and banned, and journals he published in were terminated, all this in a period in which he was artistically the most productive. Nevertheless, he was convinced that he was right in his beliefs. He felt that he was morally incorruptible, and this gave him strength. Reader responses also encouraged him to continue working along the same lines. The actor Imre Sinkovits once told him that he was extremely brave. He responded by saying: “I was not brave. I was just feared being afraid.”