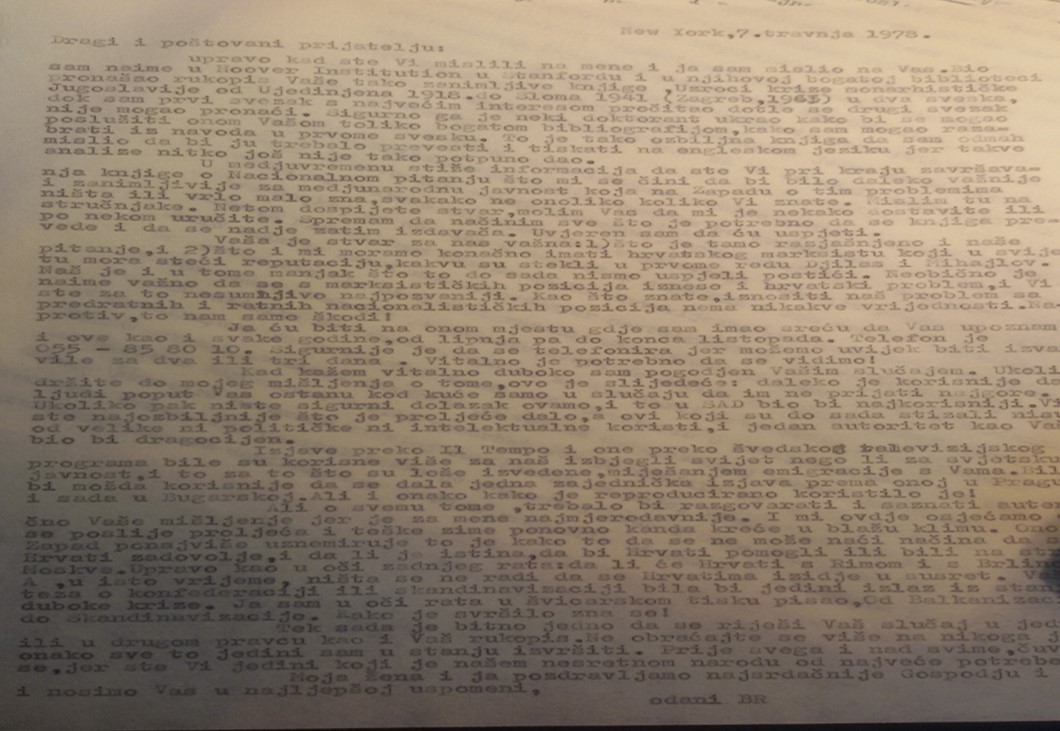 The Bogdan Radica’s letter to Franjo Tuđman is an example of his correspondence covering the period from the 1960s to the late 1980s. Their corresponding was very difficult, so Tuđman sent the letters to Radica in the USA through a confidant-intermediary. Radica first communicated Tuđman that he had to go to the Hoover Institute at Stanford University to read his book Uzroci krize monarhističke Jugoslavije od ujedinjenja do sloma (Causes of the Monarchist Yugoslavia Crisis - From Unification to Breakdown) (Zagreb: doctoral thesis, 1965) printed in two volumes in 1965. He wanted the book to be published in English. In his opinion, as a Croatian Marxist, Tuđman was to assume the role that Đilas and Mihajlov had prior to him. According to Radica, the importance of Tuđman's dissident work is that he pays attention to the question of Croatian statehood. Due to the need for secrecy, without mentioning the place of his summer residence (close to Ulivello, a village in Toscana, Italy where Radica spent his summer months), Radica informed Tuđman where they were to clandestinely meet. The letter is a testimony to the secrecy of their meetings.

In the same letter, Radica was interested in Tuđman’s interviews by the European media such as the Italian newspaper Il tempo (The Time) and the Swedish National Television. They also discussed the possibility of translating Tuđman’s book National question in contemporary Europe and publish it in English so the world knows about the issue of endeavours in establishing Croatian statehood under the Yugoslav communist dictatorship. Radica asked a publishing house in New York to print Tuđman’s book. The publishing house was Harcourt, Brace, Jovanovich, whose owner was William Jovanovich, an American businessman with Serbian origins. All of Milovan Đilas’ books were published in English by the Harcourt, Brace, Jovanovich publishing house. However, in the end, Jovanovich rejected Radica's suggestion and his publishing house never printed the book.