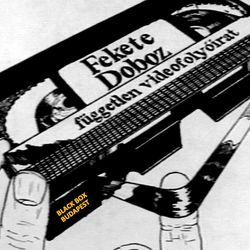 The video periodical Black Box was the first independent film production studio during the last years of communist rule in Hungary. It reported on demonstrations and civilian initiatives that the official media passed over in silence or reported on with disinformation. With its film reports, and portraits distributed in samizdat channels, at the beginning Black Box managed to create the largest film collection documenting the events of the transitional period and the change of political system both in Hungary and in other communist countries.