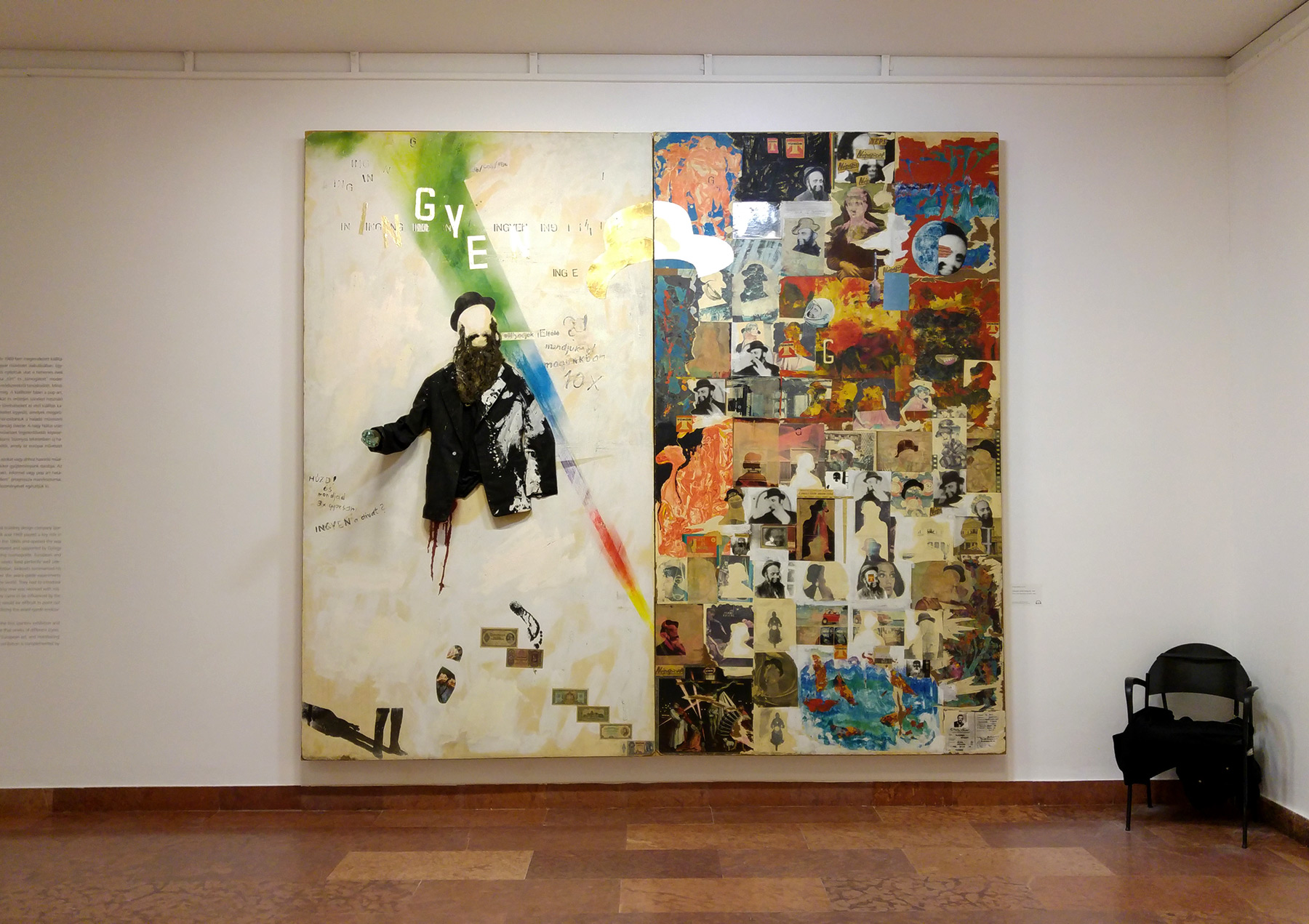 The large format oil painting of Sándor Altorjai, consisting of two panels with adjoining sections of collages and applications: there is a jacket, a hat, a beard, a few old bank notes, and photos fixed on the left panel, and on the right there are plenty of photos, photocopies, and press clippings. The painted parts were made with multiple techniques, with brush, dripping, scratch, overprint, uncovering, one can see even marks of paint applied by feet. Originally a sculptural, shiny waving hand protruded from one of the sleeves of the jacket (in accordance with the subtitle).

The photos were taken during a film shoot with a close friend of the artist, Miklós Erdély, depicting him masked as a “poor Jew,” confronted with texts and press clippings of the period. The photocopy of the author’s identity card, placed in the lower right corner (substituting the sign), deserves special attention, because at that time it was forbidden to reproduce an official document in any form.

The work has an adventurous history. It was intended to be shown first at the yearly exhibition of the Studio of Young Artists in the Ernst Museum in 1967, but an unusually large jury arriving five days prior to the opening judged it inappropriate (along with 69 other artworks). However, this single work could not be carried away immediately due to its size and weight, so it remained in the exhibition space, but was covered with a drape. This way many visitors could see it by moving the drape.

The very same thing happened in 1980, at an exhibition organized after the death of the painter. Just before the opening, a party delegation from the district council descended on the spot and told to the director of the institution that the picture was inappropriate for exhibition due to its ambivalent Jewish aspects. The director called the curator to act accordingly, but he refused to remove the object because of its size and weight. The director then covered the picture with a drape himself, but the audience undraped it several times during the opening event.

According to the consensus of art historian professionals, this image is one of the masterpieces of Hungarian Pop Art. It came into the Contemporary Collection of the Hungarian National Gallery in 1982, where it became a respected item. Currently it is shown in the permanent exhibition. The waving hand reappeared in its place (most likely due to a restoration process), but was still missing in the photo displayed on the website of the collection.