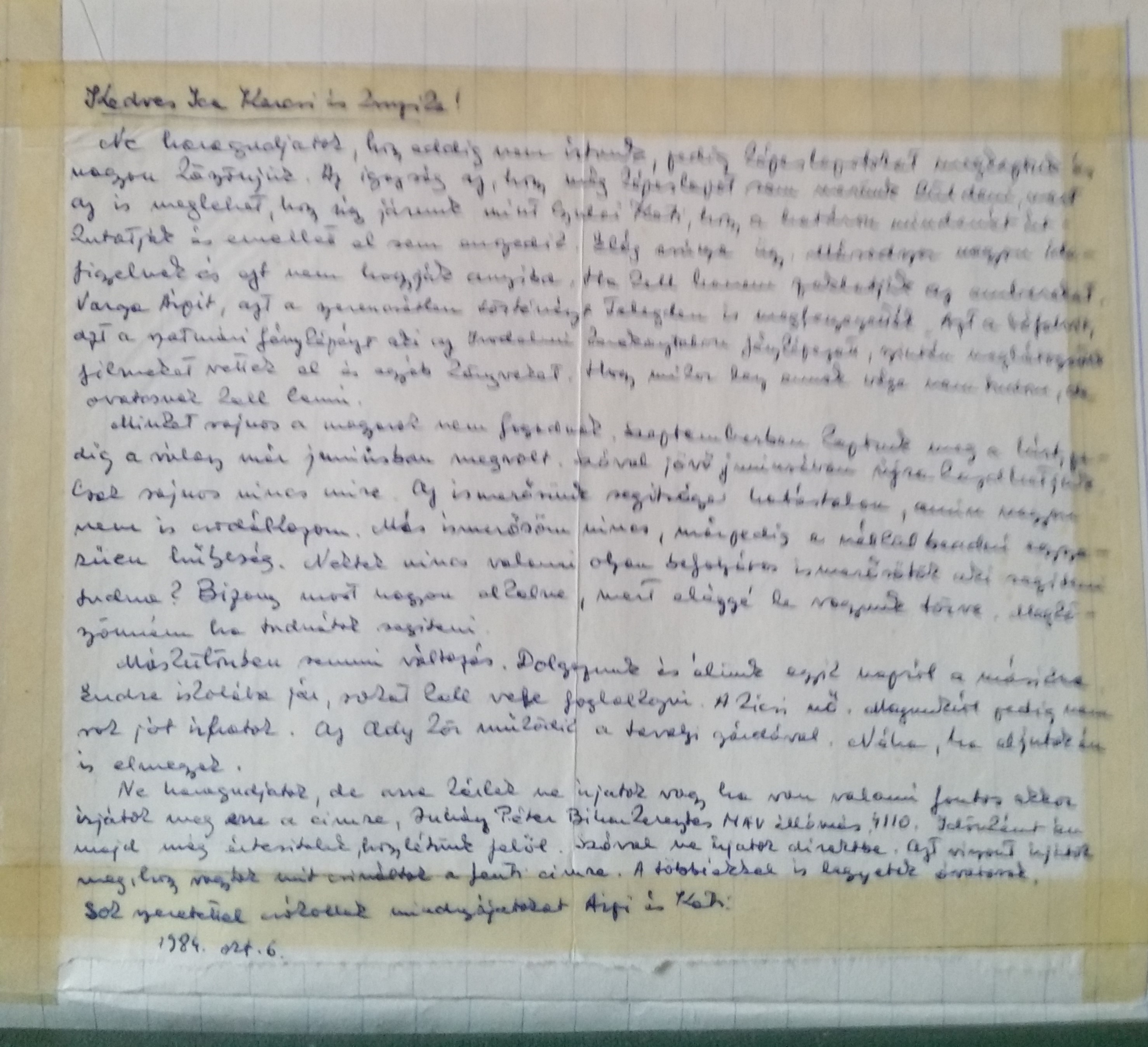 The Ellenpontok – Tóth Private Collection includes several hundred letters dating from that time. Especially interesting are the letters and notes of various shapes and sizes, smuggled primarily across the Romanian–Hungarian border by individuals during the eighties. In that time the relevant Transylvanian events had news value. Measures taken against the Hungarian minority were hardly talked about in the press, so it was essential to spread information to the broader public, partly with the purpose of protecting the victims of such measures, and partly in the hope that the situation of the minority would be improved by drawing the attention to these atrocities occurring under the Romanian communist regime.

This smuggled letter, size 15 cm x 14 cm, was delivered to the Tóth family in October 1984 while they lived in Budapest. The senders were the Spaller couple, old friends of the Tóths living in Oradea. Both Árpád Spaller and his wife Katalin obtained their degrees at Babeș-Bolyai University of Cluj-Napoca, in 1970 and 1971 respectively, in special education (health pedagogy) and Romanian language and literature. After graduating they both worked as teachers in Oradea (Spaller and Spaller 2006).

The text of the letter is as follows:

Excuse us for not having written so far, although we were glad to receive your postcard. The truth is that we hesitate to even send a postcard for fear we might end up like Kati Gyulai [Gyulai Katalin, verse performer from Oradea (Molnár 1993)], who underwent a thorough customs control only to be refused entry to the country. Quite an unfortunate case. On the other hand, they keep a close eye on us and they mean it seriously. They keep harassing people. Árpi Varga, [Árpád Varga, 1951-1994 (Sipos 1995)], that miserable historian from Tileagd was also threatened. They also showed up in the home of Sófalvi, that photographer from Satu Mare who took photos at the Literary Round Table, and confiscated some of his films and books. We have no idea when this will end but we ought to be cautious.

Unfortunately, we were denied entry to Hungary. We were informed about this in September, although the decision was already made in June. So, we can apply again next June. Unfortunately, we cannot expect much. The help from our acquaintance hasn’t been efficient which doesn’t surprise us. We do not have any other contacts to turn to, so applying under such circumstances is totally pointless. Do you happen to know anyone influential who could help us? To be honest, it would mean a lot to us now, because we are rather disappointed. We would appreciate your help.

Otherwise, everything is the same. We are working and living from one day to the other. Endre attends school, he pretty much needs our assistance. The little one is growing. As for us, not much good news to tell. The Ady Circle is still active with the old members. Sometimes, when we have time, we also attend.

If you don’t mind we need to ask you to stop writing to us, or if there is anything important, address your letter to Péter Juhász [railway worker] Biharkeresztes MÁV station 4110. From time to time, we shall send you news about us. So, please don’t write directly to us. But please let us know how you are in a letter sent to the above address. And please be cautious in the case of the others, too.

With love, Árpi and Kati.

The letter of the Spaller family perfectly illustrates the fear present in those times, affecting both the public sphere and the everyday life of the individual. People, afraid they might be observed and harassed by the Securitate, in the constant climate of insecurity, chose to be silent, avoiding any form of public manifestation. It also says a lot that the senders of the letter did not give a Romanian address for direct correspondence, but that of the railway station in Biharkeresztes, a Hungarian settlement 6 km from the Hungarian-Romanian border, which is also a border crossing point.

The reasons behind emigration did not require much explanation back then. Beginning with January 1983 it became increasingly difficult to obtain a residence permit from the Hungarian authorities, as the application involved the presentation of a letter of invitation. This seemingly insignificant administrative obstacle – as revealed also in the above letter – could represent an enormous impediment for families who planned to emigrate, though emigration did not prove to be an impossible endeavour on the whole: in 1987 the Spaller family moved to Hungary where they managed to find jobs that suited their qualifications. At present they live in Budapest (Spaller and Spaller 2006).

Molnár, János. 1993. Az Egyetlen: Az Ellenpontok és az ellenpontosok története (The only one: Counterpoints and the history of its founders). Szeged: Agapé.