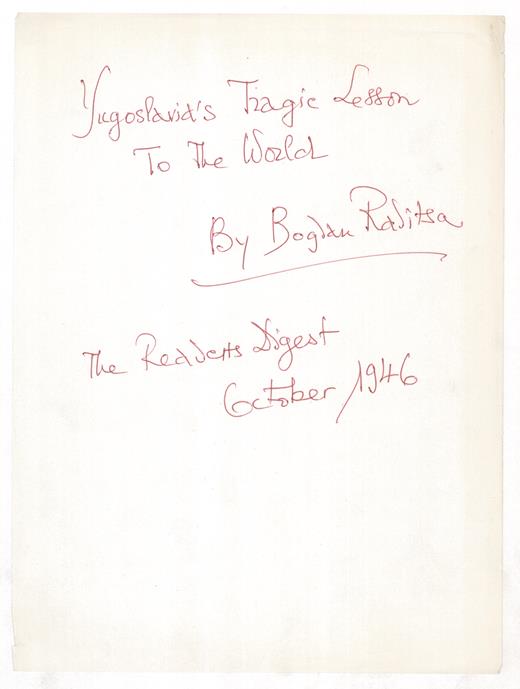 Radica wrote this article in October 1946 in New York, after his escape from Yugoslavia, in which he described the terror of the revolution carried out by the Yugoslav communists. It was later published in a review called Reader’s Digest. On account this and other articles published in the American press, the Yugoslav regime banned all his works. In this article printed in the newspaper that had a large readership and reach, he was the first person who revealed this information on revolutionary events in Yugoslavia to North America and the West. The article was translated into numerous other languages, and was published in Japan in the Japanese language. He received a writer’s fee of $5,000 for the article.

Radica introduced the term “useful innocents”, a phrase unknown in the American political culture. He considered himself and other democrats from Croatia and Yugoslavia useful innocents who had an illusion that communists would not succeed to seize absolute power in Yugoslavia. They believed naively that postwar Yugoslavia would be a democratic and federal state, not a communist dictatorship. In the beginning, the communists gathered various political representatives to get the support of wider population.This kind of political organization was called the Popular Front in the postwar communist world and in Yugoslavia (Narodna fronta).

The manuscript of the book was written by Bogdan Radica during his time in exile. It was finally published in 1974 in Barcelona and Munich, by the emigrant publishing house Hrvatska revija. He also collected his own articles published in the American press, his memoirs from Croatia and Yugoslavia covering the period from November 1944 to May 1946, and his notes from Izgnanički dnevnik in which he had made note on his journey from Italy and America. After the Croatian Spring in 1971, following conversations between the editor-in-chief, Vinko Nikolić and Radica in New York, they both decided to print the book. Radica decided to do that in order to explain what are the roots of “the newest Croatian catastrophe” in Tito’s Yugoslavia. In the book, he pointed out the fear and repression of the Communist revolution in Croatia.

Croatia survived the strongest level of repression because it demonstrated much more resistance than the other Yugoslav regions. In the book, Radica describes the situation during those revolutionary days in Zagreb and his hometown Split. He described the killings and jailing of people in those cities, among whom there were many respectable people from public life. Hence, he coined the phrase “great fear in Croatia” to describe the revolutionary terror. When he decided to flee Croatia and Yugoslavia, he sent his wife a telegram importantly titled “I have left Tito's paradise forever.”