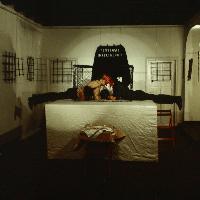 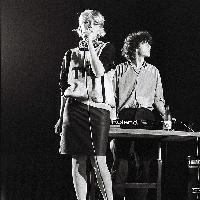 The photograph was taken during a concert by the underground band Trabant in Pécs. The band released only one single (Eszkimó asszony fázik [The Eskimo Woman is Freezing, Hungaroton, 1984, SPS 70631). The songs were recorded for János Xantus’s film of the same title. Xantus’s movie is a typical representation of Hungarian film art of the 1980s, the so-called new sensibility, which merged neo-avantgarde style with postmodern irony. These films often showed contemporary new wave bands from Budapest. The songs played in the films were also important because these bands had no opportunities to release their own records. Their other tracks were disseminated as homemade tape recordings. Trabant has made no official production since the single was published. Copyright owner Gábor Lukin, who lives in the USA, refuses to release Trabant’s songs. The photograph shows lead singer Marietta Méhes, keyboardist János Másik, and bassist Gábor Lukin. 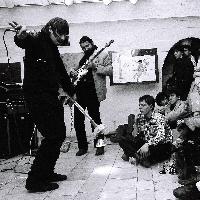 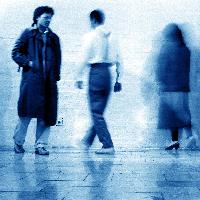 Ferenc Kálmándy, a photo artist from the underground milieu in Pécs, was prompted by the Budapest underground rock band Trabant to shoot a photographic series entitled “Too Late to Run Away, Shameful to Stay” in 1982. The composition, which consists of six pictures, captures visually the paradoxical scenery of movement posed by János Vető’s rhymes. The slow, hesitating movement of objects (in reality, people) set on the scene and the halting movement of bodies suggest the absolute futility of the paradox occurrence symbolized in the song or, perhaps, any occurrence, so it represents the rule of melancholic spleen typical of the oeuvre of Trabant. Both running away and staying are reduced to a series of actions which suggests hollowness and superfluity: the blurred movement of the body and human figures symbolize this state and a meaning of life associated with it.

This work reveals Kálmándy’s desire to link his work to contemporary photo art genres and underground cultural scenes. The figures in the photograph are director of cartoons Károly Papp (who at the time worked together with Ferenc Kálmándy for the Gallery of Pécs) and architect János Rauschenberger. Rauschenberger also worked as a stage designer, and he served as the editor of the periodical Bercsényi 28-30 between 1978 and 1980. The journal was the theoretical forum of the Bercsényi Architecture College of the Budapest University of Technology between 1963 and 1988. Alongside articles on architecture, it also published writings on underground music and arts. Its previous issues are available at bercsényi2830.hu. 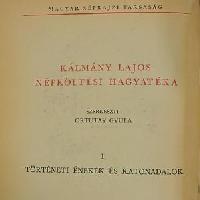 Kálmány, Lajos. Historical and military songs. 1952. Book
This book is an important example of how the scientific field was affected by politics. We are able to see how Hungarian ethnography and folklore responded to the political changes during socialism. Lajos Kálmány, as a priest and ethnographer, realised how important it was to collect folklore on the territory of the Hungarian Great Plain. His main aim was to salvage, and without a doubt, he did not want to politicise.
The change that took place in the Hungarian political system in the 1950s also had a significant impact on Hungarian ethnography. In the 1950s, Kálmány's work became important, and László Péter, Linda Dégh, Imre Katona, and Gyula Ortutay (Minister of Religion and Education in 1947–1950) wanted to publish it. In 1952, Historical Songs and Military Songs (Történeti énekek és katonadalok), was published. It contains Kálmány's collection, but the aforementioned editors radically edited the texts to create something similar to a propagandist work.
czytaj więcej
46 - 50
«« poprzednia strona 1 ... 1 2 3 4 5 6 7 8 9 10 11 następna strona »»