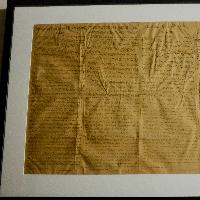 The events that transpired alongside the fall of the Romanov monarchy in February 1917, the takeover of the Winter Palace by the Bolsheviks in October 1917, and the dissolution of the Constitutional Assembly in January 1918 are immensely significant for understanding Ukrainian history and cultural opposition to communism. During that year of upheaval, many divergent visions for the future were articulated throughout the Russian Empire. In the Imperial Southwest, the Bolsheviks battled monarchists, nationalists, socialists, greens and anarchists over how to move forward during and after the collapse of empire.

The Ukrainian Museum-Archives has in its possession an original broadside of the Third Universal, issued by the Central Rada on November 20, 1917, in the four major languages used in the Imperial Southwest—Ukrainian, Russian, Polish and Yiddish. This document is reflective of efforts by the Central Rada to appeal to various communities living on the territory, while negotiating with the Provisional Government for greater autonomy. As historian George Liber notes, the first two proclamations of Rada did not define the borders of Ukraine, but the Third Universal asserted that the nine provinces in the Imperial Southwest with Ukrainian majorities belonged to the Ukrainian National (or People’s) Republic. The document also claimed parts of Kursk, Kholm/Chelm and Voronezh provinces, where Ukrainians also constituted the majority. The Central Rada also pledged to defend the interests of all national groups living in these territories and articulated a law protecting personal and national autonomy for Russians, Poles, Jews and others.

Shortly after this, the UNR established diplomatic ties with a number of European countries and even the United States. Britain and France tried to persuade the UNR leadership to side with them against the Central Powers, which they refused as they were determined to stay neutral. The Soviet Russian Republic initially recognized the UNR, but this was short-lived as the Red Army soon moved in from the north and east. This prompted the Rada to issue the Fourth Universal on January 25, 1918, which declared independence of the UNR as defined by the Third Universal. This made the push for greater autonomy within the context of empire a war of nationalist secession. (Liber, 62-63)

These early conflicts helped shape Soviet Ukraine’s relationship to Moscow for decades to come. In fact, Ukraine’s cultural, political and economic leadership struggled to define the parameters of engagement. Figures who were at the forefront of creating Soviet culture in the political and creative domains had to contest with the complex legacies of the Civil War of 1917-1922, which were never really fully resolved. Republican officials in particular (first in Kharkiv and later Kyiv) found it difficult to strike the right balance between autonomy and central control, regularly finding themselves on the wrong side of cultural policy after major shift in the priorities of Moscow.
czytaj więcej
Original Videojournal: VHS Cassette No. 144

VHS cassette No. 144 from the Original Videojournal collection contains recordings of two significant Czechoslovak demonstrations from the turn of 1988/1989. The first, only a few minutes long, was filmed on 10 December 1988 during a demonstration of the 40th anniversary of the Universal Declaration of Human Rights and was one of the very few protest rallies that had been authorized by the state. The second recording comes from January 15, 1989, the first day of the so-called Palachiáda, or Palach's week of demonstrations, as twenty years had passed since student Jan Palach had self-immolated. Demonstrations were suppressed by the State Police and the People‘s Militias forces with unprecedented brutality (including water cannons and tear gas, among others) and led to the imprisonment of opposition leaders including Václav Havel.

VHS Cassette No. 77 from the Original Videojournal collection contains a fifty-minute recording of the Czechoslovak student demonstration at Jan Opletal's memorial, which took place on 17 November 1989, and is considered to be the beginning of the Velvet Revolution. The recording shows the rally and speeches at Albertov square, a procession through the streets of Prague and then the procession‘s meeting with members of Pohotovostní pluk [police regiment for a state of emergency] at Národní třída [National Boulevard]. Subsequent violence against the marchers caused a strong negative public response and further protests. The VHS cassette also contains recordings of Wenceslas Square demonstrations on 23 and 24 November of the same year. 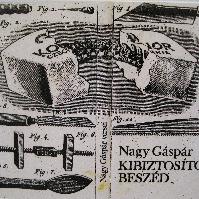 Orosz, István. Unlocked Speech by Gáspár Nagy, 1986. Graphic cover design
In 1987, a new book of poetry was published by Gáspár Nagy with the title Kibiztosított beszéd. The cover was designed with the use of a drawing by artist István Orosz (a friend of Nagy’s), the most central element of which was a rubber-backbone. It was rejected by the censors, however, and the covers were destroyed. The book was published with a new, less expressive cover. Gáspár Nagy commemorated the event in his poem Egy könyvborító halálára (“On the Death of a Book Cover”). In 1995, after the regime change, part of the original image was used for the design of a new book of poetry by Nagy, Augusztusban Ludvík Jahn nyomában (“In August, Following Ludvík Jahn”).
czytaj więcej 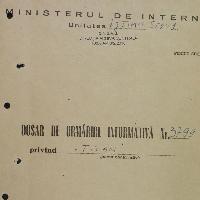 Ortinau, Gerhard. The street ballad of the ten parts of speech of the traditional grammar, in German, 1974. Manuscript

The poem Die moritat von den 10 wortarten der traditionellen grammatik (sic!) [The street ballad of the ten parts of speech of the traditional grammar] was written by Gerhard Ortinau and published in 1974 in the literary magazine Neue Literatur in a collage of texts created by the young Romanian-German writers from Aktionsgruppe Banat. The poem is made up of three parts entitled: schaltung (lining up), umschaltung (dealigning), gleichschaltung (bringing into line), which depict through metaphors how the political system worked in Ceaușescu’s Romania. Ortinau used in this poem seemingly absurd statements such as: “a pronoun was arrested” and “the adverb was cut off from the newspaper” to suggest practices such as political repression and censorship. The poem ended with a paraphrase, which represents an irony concerning the Ceaușescu’s dictatorship: “Die sprache c’est moi!” (sic!) [The language c’est moi!]. The non-conformist character of the poem can be seen also from the spelling, which avoided the usual capital letters for nouns, specific to the German language.

The publication of this collage of texts, Neue Literatur, was possible due to the relative liberalisation that took place in Romania during the late 1960s and early 1970s. For a short period of time, cultural institutions enjoyed more autonomy in their relation with the political decision-makers and censorship was less strict. In this context, Gerhardt Csejka, one of the editors of Neue Literatur, had a key role in promoting the texts of Aktionsgruppe Banat and helping them to pass the filter of censorship (Iorgulescu 2006, 419–421). The Securitate noticed the hidden message in this text due to the notes provided by informers from the German speaking literary milieu of the Banat, who gave to the secret police a detailed interpretation of its metaphors and word plays. For example, one informer explained to the Securitate officer in a note of September 1974 that the title of the third part of the poem was an allusion to the so-called Gleichschaltung, the process by which the Nazi regime imposed its control on all areas of German society (ACNSAS, I 210 845, vol. 2, 15 verso).