Ivars Žukovskis and Lidija Doroņina-Lasmane were editors and publishers of the periodical Auseklis. Ivars Žukovskis (b. 1936) was a journalist by profession. In 1968, during a trip to Yugoslavia, he condemned the Soviet invasion of Czehoslovakia in an interview with a local newspaper, and for this 'offence' he was sentenced to five years‘ imprisonment in a labour camp in Mordovia. Soon after his return from the camp, the KGB confiscated a letter from political prisoners at the camp to the United Nations that he had brought out with him, and he was sentenced to 2.5 years in prison in 1974. In 1979, he was one of 45 Estonian, Latvian and Lithuanian dissidents who signed a protest document, the Baltic Charter or the Baltic Memorandum. 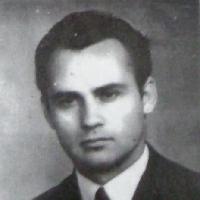 Alexandru Șoltoianu (born August 24, 1933, Inești village, Telenești district, Republic of Moldova) is a prominent national activist and one of the main leaders of the nationally oriented opposition which emerged in the Moldavian SSR in the late 1960s and early 1970s. Together with the members of the Usatiuc–Ghimpu–Graur group, he is often singled out as one the main ideologues and organisers of anti-Soviet resistance in this period. Șoltoianu was never technically a member of the National Patriotic Front, although he collaborated with its founders. Instead, he sought to create a parallel nationalist underground organisation, tentatively labelled National Rebirth of Moldavia (Renașterea Națională a Moldovei, RNM), which was supposed, according to his plans, to reach a mass following of up to 250,000 members. The structure of this organisation would have been based on a wide network of student associations, which should have acted as a legal façade for the movement’s real aim, i.e. fighting for the MSSR’s emancipation from “Russian” domination, its secession from the USSR and its unification with Romania. Șoltoianu’s social and intellectual background partly explains his political options. He was born into a poor peasant family and had a very difficult childhood. His father died at the end of World War II, during the siege of Berlin, so the young man had to provide for himself from a very early age. After graduating from the seventh grade, Șoltoianu was admitted to an agricultural college specialised in wine production. After completing his studies, in the early 1950s, he began working in a winery in Bardar, near Chișinău. Subsequently, he was drafted for the compulsory three-year military service, where he distinguished himself and was recommended for admission to the prestigious Moscow State Institute for International Relations (MGIMO). His initial attempt failed, however, so he returned to Moldavia and worked for several years as an instructor in the Nisporeni district section of the Communist Youth League (Komsomol). Due to his ambition and powerful motivation, he was finally accepted for the MGIMO in 1959, and he studied there until 1965. According to Șoltoianu’s own testimony, several of his fellow Hungarian and Romanian students had a strong impact on his political opinions and initiated him into nationalist ideology. The liberal atmosphere at the MGIMO seems to have exerted an even stronger influence on him. He also acknowledged the general context of Khrushchev’s “thaw” and the general climate of openness and free discussion as decisive for his conversion to nationalism. As in other cases, the Moscow intellectual milieu acted as a catalyst for stimulating oppositional ideas and practices. Șoltoianu started to display a systematic interest in Romanian history and literature, with a particular emphasis on the “Bessarabian question.” He also used Marx’s and Lenin’s pronouncements on Romania and Bessarabia to strengthen his nationalist views and to defend himself when confronted with the Soviet security apparatus. His activities became more visible starting from late 1962, when he founded the Moldavian student association in Moscow. In 1965 he was denounced to the KGB, which summoned him for questioning. He received a warning, but suffered no immediate consequences and continued his “subversive” activities. His informal network expanded during 1966–67, when he briefly worked at the Chișinău State University as an instructor in the history of the Orient. However, he was forced to return to Moscow, moving there permanently together with his family. Subsequently, he worked as an economist at the Labour Research Institute affiliated with the State Planning Committee of the Soviet Council of Ministers. In this capacity, he had access to foreign press reports on the Soviet society and economy, which he used for drafting his political treatise. During 1968–1971, Șoltoianu also frequently visited the Romanian Embassy in Moscow, where he initiated “subversive” conversations with the embassy staff. In this context, his ties to the Usatiuc–Ghimpu–Graur group intensified, with Șoltoianu signing the statement addressed to Ceaușescu. However, Șoltoianu maintained his separate network in Chișinău and several other Soviet cities. He was arrested on 10 January 1972, tried and sentenced to six years in a high-security labour correction colony and to a further term of five years of internal exile in the “remote regions” of the USSR (i.e., in Siberia). Overall, he spent fourteen years in detention, due to the extension of his term of internal exile. He was released only in 1986, whereupon he returned to his Moscow apartment. His case was revised during the Perestroika period. Șoltoianu was originally sentenced according to art. 67, part I and art. 69 of the Penal Code of the MSSR: anti-Soviet agitation and propaganda / participation in an anti-Soviet organisation aiming at committing dangerous state crimes. First, on 31 August 1989, his sentence was reclassified according to art. 71 of the Penal Code of the MSSR (subverting the national and racial equality of the people of the USSR), which meant a more lenient sentence of three years in a standard security labour correction colony. One year later, on 24 September 1990, as a result of a petition filed by the Prosecutor’s Office, the Presidium of the Supreme Court of the Soviet Socialist Republic of Moldova annulled Șoltoianu’s sentence and closed the case against him. This decision was supplemented by an additional ruling of the Moldovan Supreme Court in August 1993, which, as a result of Șoltoianu’s petition, restored the defendant’s correct family name (Șoltoianu instead of Șaltaian), his true birth date (1933 instead of 1934) and returned some of his personal papers earlier confiscated by the KGB. After 1991, Șoltoianu never returned to Moldova from Moscow, except for short trips. He remained active in nationalist politics (for example, joining his colleague Mircea Druc as a member of the National Council for Reunification, which the latter founded after his emigration to Romania in 1991). He also kept some connections in Romanian nationalist circles and was occasionally interviewed by the Moldovan press, displaying a remarkable consistency with his earlier anti-Russian opinions. However, in recent years he was no longer visible in the public sphere, mostly due to his age. At present, he still lives in his old apartment in Moscow.

Iosif Țon (b. 30 September 1934, Gârboviţa, near Alba-Iulia) is a Romanian Baptist minister, who graduated Romanian philology at the University of Cluj in 1955 and theology at the Baptist Theological Institute in Bucharest in 1957. From 1969 to 1972, he studied theology in Oxford. He was the main initiator of the open letter of protest against infringements of human rights in Romania relating to religious freedom entitled: The neo-protestant denominations and human rights in Romania, which was drafted in February–March 1977 and broadcasted by Radio Free Europe in April 1977. For this initiative he was arrested and interrogated by the Securitate (Silveșan and Răduț 2014, 52–53).