Miroslav Holomek was born in Svatobořice near Kyjov in southern Moravia and followed the footsteps of his uncle JUDr. (J.D.), Tomáš Holomek, who was the first Roma lawyer in the former Czechoslovakia. He was one of the founders of the Roma-Gypsy Union and was its chairman in 1969-1973.

Miroslav Holomek went to the municipal school and started studying at Kyjov gymnasium, where he was expelled for racial reasons during World War II. He worked as a labourer and managed to escape from the concentration camp, where many of his relatives died. In 1951 he graduated from the University of Social Sciences in Brno, from 1962 to 1966 studied at the University of Politics, where he received his Ph.D. degree in social sciences. He then worked as Deputy Director at the State Labour Back-up School and was also Director of the Evening University of Marxism-Leninism, and then worked for 15 years in the Communist Party. As part of his profession, he devoted his entire life to the Roma question and published a number of expert articles on the subject. Due to the tragic history of his family during the Second World War, which suffered from racial reasons, he was very critical to the Communist Party. During March 1968, he and others founded the Union of Gypsies-Roma. 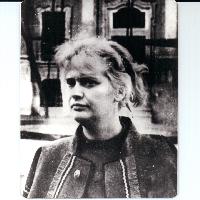 Alla Horska was born in Yalta, Crimea in 1929 into a family of fairly high-ranking communist officials. Her father was a Soviet filmmaker and then eventually moved to Leningrad, where she and her mother survived the siege in 1941-1943. The family moved to Kyiv, partly to avoid pressure from the Soviet authorities on her father. In 1946 Horska enrolled in art school, became a Komsomol member, and later graduated from the Kyiv Art Institute. Her work was displayed in a number of all-union exhibitions.

A member of the ‘red bourgeoisie,’ Horska married well, had an apartment in the centre of Kyiv, and studied fine art. Like many artists of her generation, she took advantage of Khrushchev’s thaw and experimented with cultural and literary forms that had been stamped out by socialist realism. Horska was a founding member of the Kyiv Club for Creative Youth (1959-1964) and, although being raised in a Russian-speaking family, began learning Ukrainian and exploring traditional motifs in her work. She was also involved in unearthing crimes of the Stalinist period. In 1962-63, together with Les Taniuk and Volodymyr Symonenko, she located unmarked mass graves of NKVD victims, who had been slaughtered in the 1930s, near the village of Bykivnya. They penned a memorandum informing the Kyiv City Council of their location. Soon thereafter, Symonenko was brutally beaten up, eventually dying from blows to his diseased kidneys.

Horska was radicalized by her many run-ins with the authorities, a turn reflected in her later work. In 1964, a stained-glass window she created at Kyiv State University, portraying an angry Shevchenko holding a woman betrayed–-symbolizing Ukraine—was destroyed for being ideologically alien. Horska wrote letters in support of colleagues arrested and incarcerated for “anti-Soviet agitation and propaganda.” In 1968, she was one of 139 signatories on a letter addressed to Leonid Brezhnev, Aleksei Kosygin, and Nikolai Podgornyi asking them to put a stop to these practices, which violated ‘soviet legality.’ She also refused to testify at a number of trials of her colleagues, citing the illegality of the proceedings. Shortly thereafter, rumours began circulating that a terrorist banderite organization with ties to the CIA was working in Ukraine; Horska was named a leading member of this illegal organization.

On December 2, 1970, Horska was found murdered in the village of Vasylkiv, killed by blunt force trauma to the back of the head. She had visited her father-in-law Ivan Zaretsky on the morning of November 28 to borrow an old sewing machine. The following day he was found lying, decapitated, on train tracks near Fastiv, 35 kilometers from his home. After a brief investigation, the Kyiv Procuracy determined that Zaretsky had killed Horska, and then committed suicide in despair. Contemporaries saw the hand of the KGB, who tried first to intimidate Horska into silence, and, when that failed, brutally murdered her.

István Horváth, born in 1966, is a professor at the Hungarian Language Sociology and Social Work Department of the Babeș-Bolyai University of Cluj/Kolozsvár and head of the Romanian Institute for Research on Minorities.

He completed a BA in philosophy and Sociology in 1991 and a PhD in the philosophy of history in 2002 at the Babeș-Bolyai University of Cluj. He is a scholar focusing on various aspects of ethnic and ethno-linguistic relations, with a special focus on multilingualism, linguistic diversity management, and ethnic migration. He also offers structured insights into post-communist ethno-political dynamics in Romania and Eastern Europe. In these fields, Horváth published books and articles in English, Hungarian, and Romanian.

He has made noteworthy contributions to discussion of the post-communist institutionalization of the field of research on ethnic, ethno-linguistic, and ethno-politic diversity management for Romania by initiating series of lectures and founding and/or heading NGO-based or public research institutions (he is the first head of RIRNM founded in 2007).
czytaj więcej
Horváth, Tamás M.

Prof. Tamás Horváth M. is a lawyer and researcher. He was born in 1960, and obtained his degree from the Faculty of Law at ELTE University of Budapest. In the 1980s he worked within the Soviet model of public administration, and later became a researcher at the Hungarian Institute for Public Administration. His research fields include the studying of self-governments, the organization of the state-run public duties, and the management of public services. As a researcher, he worked for the National University of Public Administration until 2007.