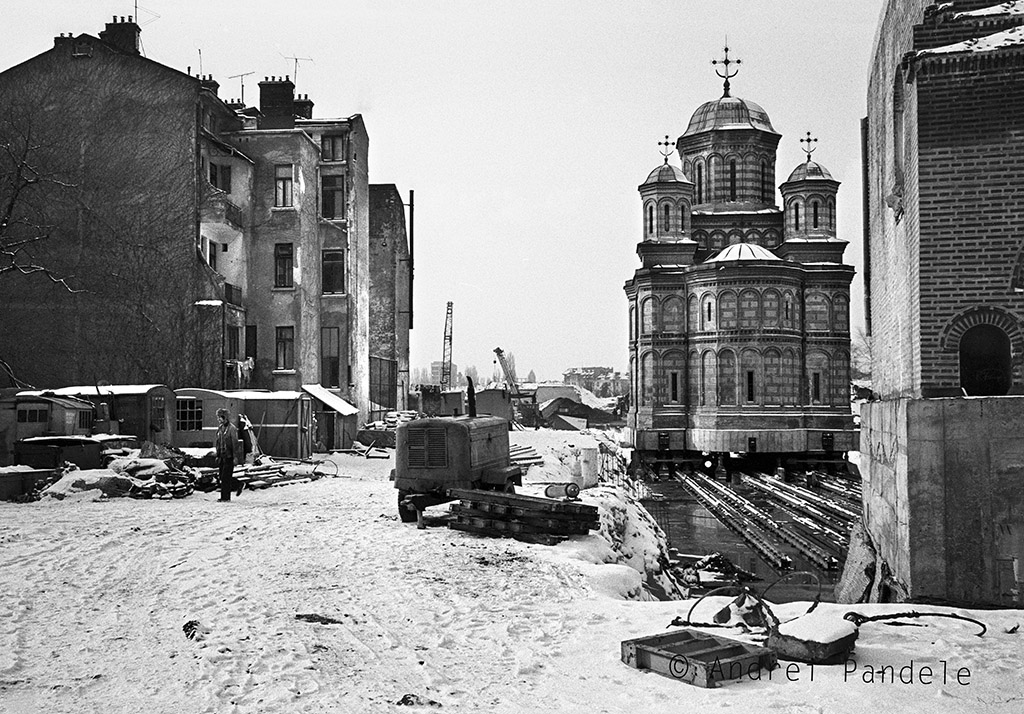 The results of the so-called “rearrangement” operations in the centre of Bucharest was as follows: 5.86 km2 of the historic centre of the city were demolished; 1.66 km2 remained waste ground overgrown with weeds; approximately 20,000 properties were destroyed; over 60,000 families were forced to move; 19 streets were blocked or ceased to exist. The following Orthodox churches were demolished: Enei, Albă Postăvari, Old Spirea, Well of Healing, St. Nicholas Sârbi, Gherghiceni,  St. Nicholas Jitniță, Lady Oltea, St. Vineri Hereasca, Olteni, Old St. Spiridon Vechi, Holy Trinity Dudești, and Bradului (Bradu Staicu). The following monasteries were wholly or partially demolished: Cotroceni, Nuns’ Hermitage, Mihai Vodă, Văcărești, Antim, and St. Pantelimon. The following synagogues were demolished: Aizic Ilie, Rezith Doadh, and Malbim. Other historic buildings were also demolished: the Brâncoveanu Hospital, the great covered market in Unification Square, the Mina Minovici Institute of Forensic Medicine, the Yellow Inn, the Republic Stadium, and the Military Museum. Eight churches were translated from their original sites and hidden among apartment blocks: St. John Moși, Schitul Maicilor, Olari, St. Ilie Rahova, Mihai Vodă, St. John Piață, New St. George Capra, Stork’s Nest; so was the synodal building of the Antim Monastery. “The great merit for the translation, and thus saving from demolition, of these monuments is due to the engineer Eugen Iordăchescu of the Project Bucharest Institute,” says Andrei Pandele. This operation of saving cultural heritage that had been destined for destruction indeed called for professionalism on the part of those who conceived it, but also the courage to propose a compromise solution that would have a chance of being accepted by Nicolae Ceaușescu, who was personally supervising the construction of the House of the People.

The image captured by Andrei Pandele illustrates the translation of the church of the Mihai Vodă Monastery, an emblem of pre-modern Bucharest, originally situated on the hill where the Palace of the Parliament – built during the Ceauşescu regime under the name of the House of the People – now stands. The monastery buildings, which surrounded the church and were completely demolished to make way for the House of the People, were the first location of the State Archives after the founding of the modern Romanian state in the nineteenth century. The monastery was founded in 1594 by Michael the Brave, an extremely important figure in the national past, as he is considered the first to have unified, for a short time in 1600–1601, the territories that now make up Romania. In spite of the fact that during the Ceauşescu regime Michael the Brave became even more important in national history than he had been before, the monastery fell prey to the so-called “urban systematisation” programme promoted by the regime. The monastery church was saved from demolition by the operation of translating it, which in this case was one of the most laborious actions of this kind as it required it not only to be slid along a distance of 289 metres, but also lowered by 6.2 metres. Andrei Pandele’s photograph shows the Mihai Vodă church still on the rails used for the translation, already at the foot of the hill, close to its present position, although it is now hidden behind apartment blocks taller than it, which were built after this image was immortalised.