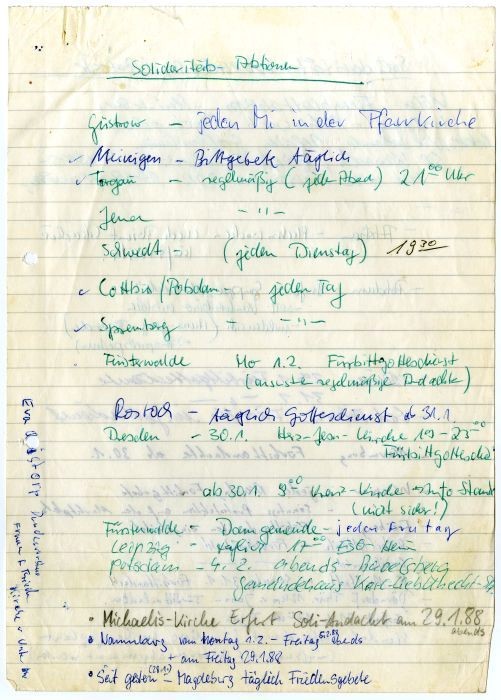 On 17 January 1988, around the periphery of the traditional march commemorating Rosa Luxemburg and Karl Liebknecht, which had long since become a mere ritual, a group of protestors unfurled a banner with the famous words of Luxemburg “Freedom is always and exclusively freedom for the one who think differently.” They, along with many other protestors were arrested at the end of the demonstration, with some being forcibly extradited from the GDR against their will. This measure and its consequences are a key element in the prehistory of the “Wende” of 1989. Owing to the lack of publicity, little was known about the events or the protests and solidarity demonstrations which followed it.

As a result, the so-called “Telephone Contact group” was created in Berlin. They distributed their number across the GDR via the structures of the church. Similar to an autonomous investigation committee, the group gathered information on the reactions (and mood) in the country. The notes which have been preserved here pinpoint where and when demonstrations and other acts of solidarity with the “Luxemburg-Liebknecht demonstrators” could be found. Marianne Birthler, who would later go on to become the Federal Commissioner for the Documents of the State Security Service of the former GDR, also belonged to the “Telephone Contact Group” and passed this on to the Robert-Havemann Society.