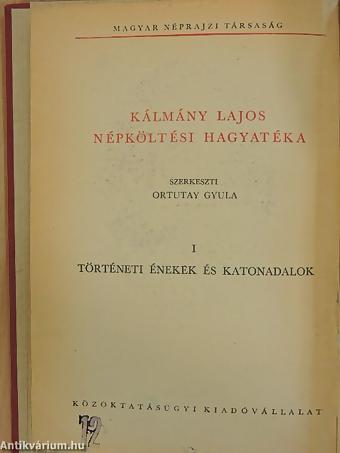 This book is an important example of how the scientific field was affected by politics. We are able to see how Hungarian ethnography and folklore responded to the political changes during socialism. Lajos Kálmány, as a priest and ethnographer, realised how important it was to collect folklore on the territory of the Hungarian Great Plain. His main aim was to salvage, and without a doubt, he did not want to politicise.
The change that took place in the Hungarian political system in the 1950s also had a significant impact on Hungarian ethnography. In the 1950s, Kálmány's work became important, and László Péter, Linda Dégh, Imre Katona, and Gyula Ortutay (Minister of Religion and Education in 1947–1950) wanted to publish it. In 1952, Historical Songs and Military Songs (Történeti énekek és katonadalok), was published. It contains Kálmány's collection, but the aforementioned editors radically edited the texts to create something similar to a propagandist work.