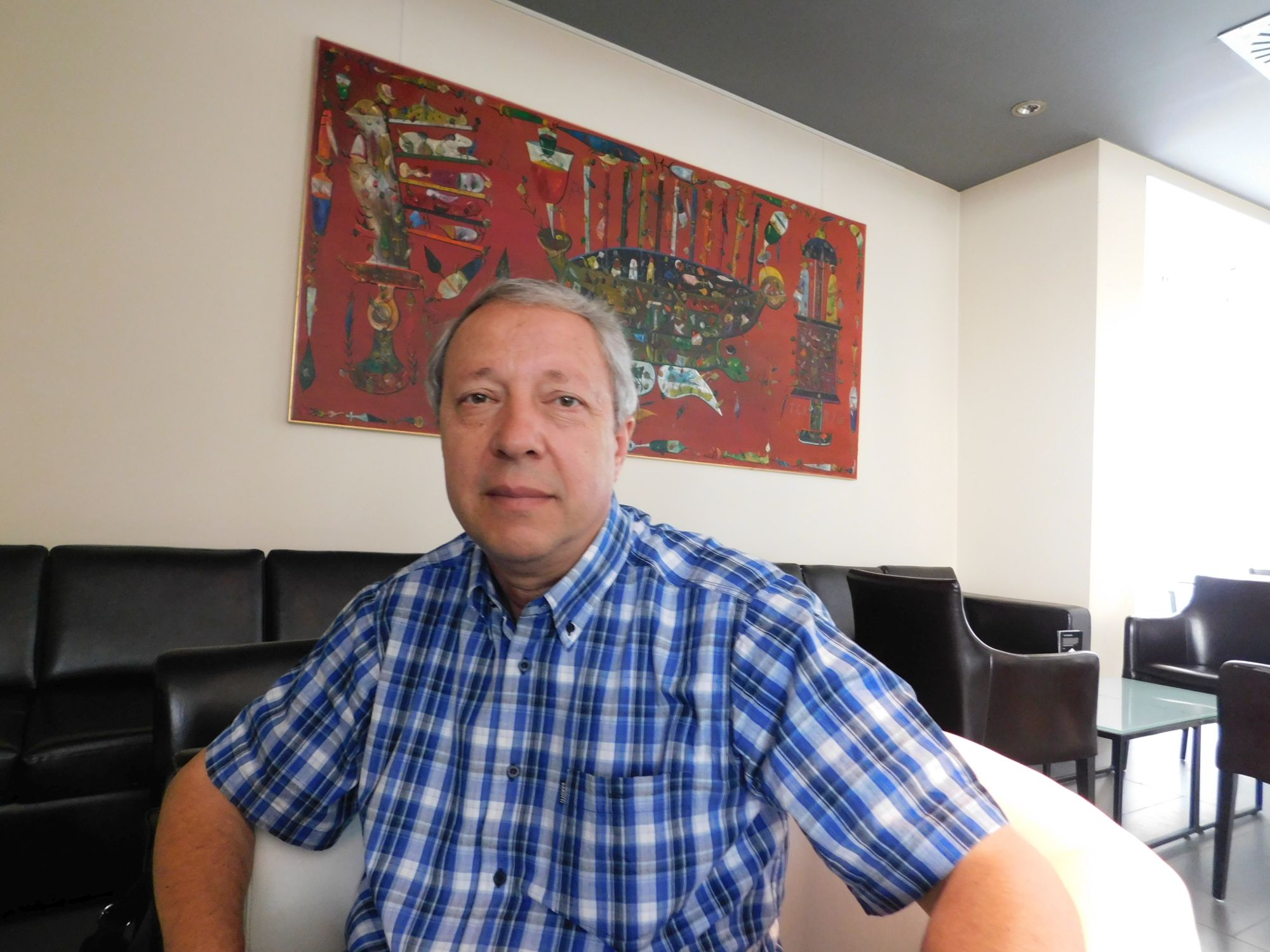 Lucian Ionică (b. 28 March 1952, Timișoara) is one of the cultural personalities of the city of Timișoara. After attended high school in his home city, he studied at the Faculty of Philosophy of the University of Bucharest  (1972–1977). Also in Bucharest, he undertook postgraduate studies in film direction and editing at the Academy of Theatre Art and Cinematography. He also has a doctorate in philosophy from Babeş-Bolyai University in Cluj-Napoca, awarded in 1999 for a thesis on “The Epistemological Aspects of the Visual Image.” From 1980 to 1990 he was a maker of documentary films at the University of the West in Timişoara, and then a sociologist at the same university for the following two years. Since 1992, he has taught in the Journalism section of the same university. For more than a decade, starting in 2004, he was also director of the regional studio of Romanian Television in Timişoara.

Lucian Ionică is the author of a number of books and substantial studies, and has made more than 40 documentary films, which have often won awards at important festivals in the field. Among the documentary films in which he has been involved, there is one that has a special historical value because it foregrounds witnesses to the Romanian Revolution of December 1989 in Timişoara. The film is entitled Li-ber-ta-te, li-ber-ta-te! (Free-dom, free-dom!), and is to be found in the videotheque of the Memorial to the Revolution in Timişoara. “In the first days of January 1990,” says Lucian Ionică, giving a short account of how this film was made, “I received a phone call from Iosif Costinaş – the famous investigative journalist from Timişoara who disappeared in suspicious circumstances and was declared dead fifteen years ago [in 2002] – who called me to come and meet him and said: ‘Let’s film some interviews with participants in the Revolution.’ He got hold of a video camera, we went to the offices of the magazine Orizont, all very conspiratively, shut ourselves in a room there, and began to film. Over three days we made filmed interviews. Six or seven hours, raw film material. I think there were six people interviewed. We filmed on VHS cassettes, a support that didn’t allow the storage of video images of very good quality; but we chose to do this because, at that time, in January 1990, were especially interested in the information, not necessarily in the accuracy of the video frames.

Lucian Ionică is also the principal editor of a large-scale project, Enciclopedia Revoluției din Timișoara (The encyclopaedia of the Revolution in Timişoara), the publication of which began with the twenty-fifth anniversary of the events. The Encyclopaedia is in three volumes, which appeared between 2014 and 2016, totalling over 1,000 pages. Lucian Ionică was the coordinator of the first volume, which includes a detailed chronology of the events in Timişoara in the period 15–22 December 1989, together with updated details on the victims of the Revolution. It is a work addressed to the general public, and offers information about those dramatic days in an accessible and succinct form, with the aim of helping its readers to discern what is essential out of the multitude of available data, some of it contradictory, but also of reminding them that there are still questions that remain to be answered. “December 1989 was a unique moment in our lives and in the history of our city. People died then, in places where today we walk in peace. Gradually the memory of those days will be reduced to a commemorative ceremony. I don’t believe it is enough to pay homage to them only occasionally in words. In memory of their supreme gesture, we must try to obtain a better understanding of what happened then. One form of recognition not only on our part but also on the part of those yet to come is a detailed knowledge of those clashes in which some became heroes, others were participants, and others mere spectators,” says Lucian Ionică about the meaning of this substantial editorial project.

As regards communism, Lucian Ionică is of the opinion that “at that time, communism was a given, just as it was a given that sun rose in the east and set in the west. Like it or not, that was the situation. Under those conditions, you tried to find a way of living as normally as possible. You saw those who tried to rise in the social hierarchy through politics – pushy types, eager to rise very fast. And you had a certain reaction of disapproval. You knew you could be listened to, you could be informed on – and so you protected yourself and only talked openly with friends that you trusted. You created a space of freedom for yourself. And you tried to find a community in which you could be yourself without restrictions. I was lucky to have two such communities: there was the cine-club, cinematography area – I had the good fortune to get into that in 1968, an important year for Romanian communism, because it was then that Nicolae Ceauşescu made his declaration of distancing in relation to the invasion of Czechoslovakia by Soviet troops. The second little opening was the area of science fiction, of the literary cenacles. I was a founding member of the Timişoara H.G. Wells Cenacle and the Science Fiction Cenacle Helion. These were forms of equilibrium, spaces of freedom.” Lucian Ionică was a Party member, but a passive one, who never wished to use this political membership in order to stand out, but only to follow a “normal” professional career, without the restrictions that would have resulted from a refusal to enter into this mass organization, which by 1989 had come to have almost four million members: “I was a Party member, because during university studies we were told that if you didn’t become a Party member you couldn’t do anything professionally. It was a sort of given and, for very many people, it was just a formality.”

Above all, the revolutionary days that led to the change of regime in 1989, the days in December 1989 in which Lucian Ionică was out in the streets in Timişoara, are for him unforgettable: “The  spirit of those days was something amazing. I think I experienced then the greatest joy, the most intense joy in my life. There was also a little fear, but above all there was this overwhelming joy. I realized that things could never go back, that here, communism had fallen. Finished! I felt that there would be something else and I hoped that it would be much better. What I experienced then was an utterly special state, during those days in the streets of Timişoara. When I saw 100,000 to 150,000 people in Victory Square, I knew that communism was finished, it would fall, it had no future. The expressions on people’s faces had changed; they were all experiencing those moments of joy, of euphoria, of solidarity, of fraternity. It was amazing, absolutely amazing.” Lucian Ionică doubles and strengthens this confession with another: “If there was something that stood out for me then, if there was something, how to put it, really striking, then it was this: the fact that the people were united. And they all wanted, back then, the same thing. Not only did they want the same thing, but they also expressed this and acted openly to the same end and in the same direction. They didn’t hide; they were already living in complete freedom. And this seemed to me almost miraculous. It was everything that hadn’t been done until then. Before December too, people would grumble; you would hear this or that person, that they didn’t like the life they were living in communism, but now it was firm, clear, straight, in the open, out loud, in full acceptance of the risks. There was no going back; there was the feeling of freedom. Of course there was also great sorrow at that time for the people who died, for those who were wounded. The sorrow of having lost so many people and the miracle of living in freedom…”