Letter of Petru Lucinschi to the Central Committee of the CPM (in Russian), 11 December 1970 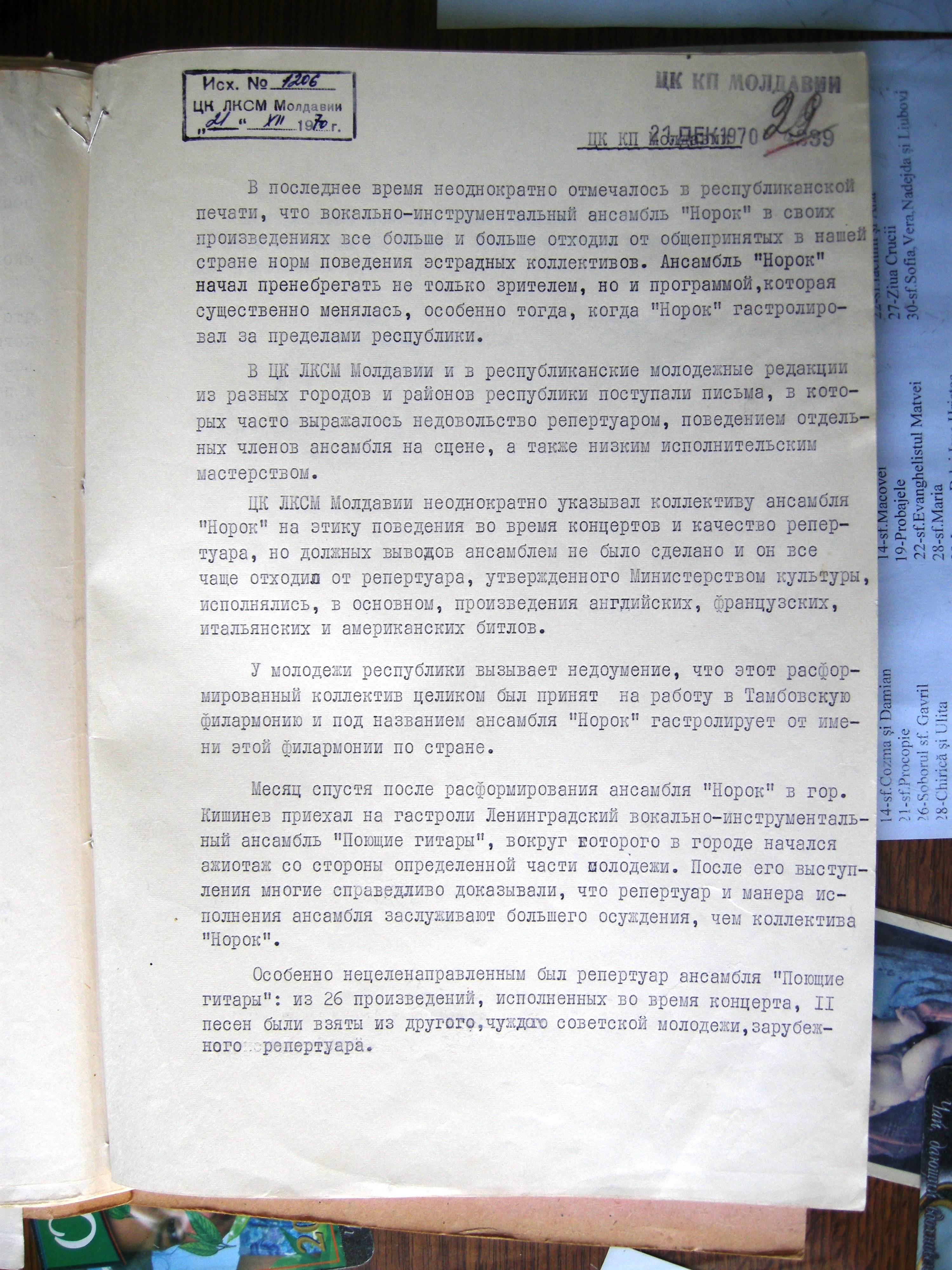 Following the official decision to disband Noroc in September 1970, the members of this group found a temporary job at the Tambov Philharmonic Orchestra in Central Russia. This provoked a swift reaction on the part of the Moldavian Party establishment. Three months later, in December 1970, the leader of the Moldavian Komsomol (and future high Party dignitary and later president of the Republic of Moldova in 1997–2001), Petru Lucinschi, sent an official letter to his superiors in the Central Committee complaining about Noroc’s continued existence and frequent tours organised in various Soviet cities, despite its harmful ideological impact on “Soviet youth.” It is rather doubtful that this initiative came from Lucinschi himself. It was probably a move orchestrated by the Party leadership in order to legitimise its further actions and claim that it had support from below, i.e., from the representatives of the republic’s youth. In his letter, Lucinschi uses the customary Soviet jargon, claiming that Noroc “deviated more and more from the generally accepted norms of behaviour” expected from a Soviet musical group. The band is directly accused of ignoring the officially approved “programme, which suffered significant changes, especially in those cases when Noroc had tours beyond the republic’s borders.” Lucinschi does not fail to mention the “discontent” regarding Noroc’s “repertoire and behaviour” expressed in various letters sent to the Komsomol and local newspapers, invoking the public’s reaction as a legitimising strategy. The main grievance against Noroc and its musical style, in the Komsomol leader’s interpretation, concerns “the ethics of behaviour during the concerts and the quality of the repertoire.” In a revealing phrase deciphering these cryptic remarks, Lucinschi openly states that the band’s condemnation by the authorities derives from its “performances of musical pieces mainly authored by various English, French, Italian, and American Beatles” (sic!). This letter is also interesting due to Lucinschi’s parallel between Noroc and a similar Soviet musical group – the Leningrad-based band Poiushchie gitary (Singing Guitars), which also featured Western beat and rock music in its repertoire, coupled with modern arrangements of traditional Russian songs. Referring to a recent concert by the Poiushchie gitary held in Chișinău, Lucinschi hints at the danger represented by such musical trends, qualifying the Leningrad band’s music as “even more condemnable” that Noroc’s. This is due, on the one hand, to the “agitation among a certain part of our youth” (note the striking similarity to the language used by the letter from the Odessa party leadership). On the other hand, almost half of the songs performed during their concert “were borrowed from a different, foreign repertoire, completely alien to Soviet youth.” The real purpose of this letter becomes obvious from the seemingly innocuous conclusion, which states: “the republic’s youth is perplexed by the fact that this disbanded musical group was hired… by the Tambov Philharmonic orchestra and continues to tour the country… under its old name, Noroc.” The effect of this letter was immediate and radical: the members of Noroc were fired from the Tambov Orchestra and had to seek new employment in a small Ukrainian city. Lucinschi’s role in the whole affair was somewhat ambiguous: while playing the role of an ideological vigilante in December 1970, he was instrumental in assisting Noroc’s leader, Mihai Dolgan, to recreate the group under a new guise and name, Contemporanul (The Contemporary), in 1974. However, it is clear that Noroc’s deviation from the official ideological norms and its openness towards (and propagation of) Western musical trends were the real cause of the band’s demise. In an ironic twist, Lucinschi himself admitted, in a later interview, that the Noroc phenomenon became so popular due to its resonance with the wider youth subculture: “However hard the system tried, it could not control and curtail fashion, music, dances… i.e., the most elementary and necessary attributes of the young generation. Despite all the efforts made by the authorities, these things could not be stopped, because one simply could not stop the air we breathed. Two parallel worlds already existed in our society.” (Poiată 2013: 184).