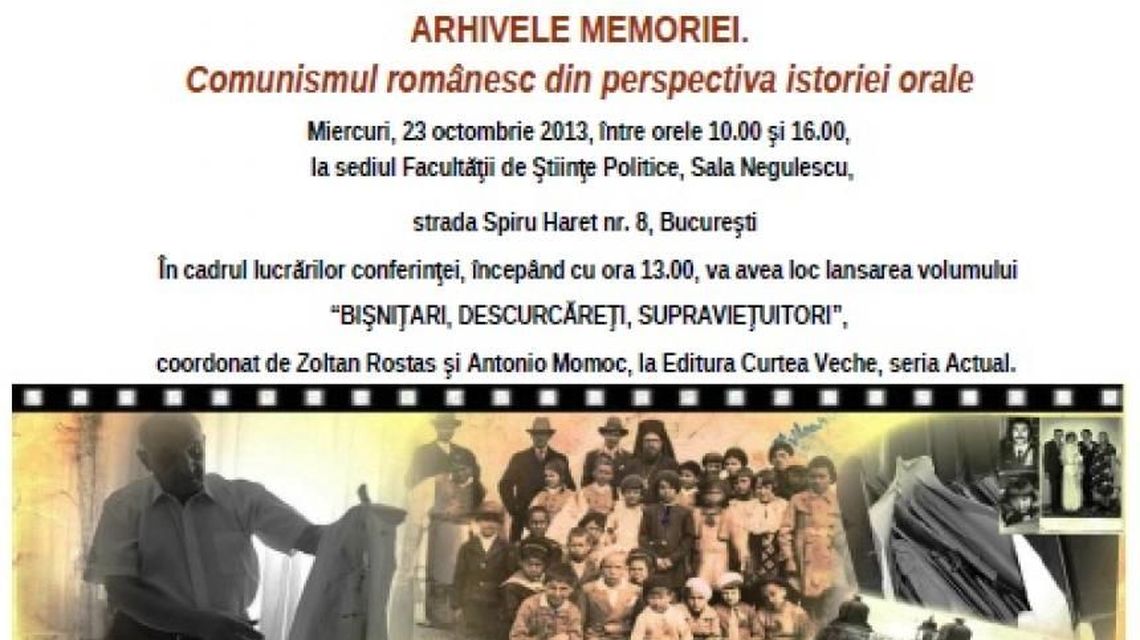 The conference Arhivele memoriei: Comunismul românesc din perspectiva istoriei orale (Memory archives: Romanian communism from the perspective of oral history) was organised by CNSAS (Romanian acronym for The National Council for the Study of the Securitate Archives) in partnership with Faculty of Political Sciences, University of Bucharest, on 23 October 2013. The event was financed by the Konrad Adenauer Stiftung – Romania Office. This was the first national conference of a series of similar events held under the label of Memoria trecutului recent (The memory of the recent past). It aimed at bringing together those institutions and NGOs involved in projects regarding the creation and storage of oral history archives, and their use for academic and public purposes. A significant part of the papers presented dealt with methodological issues regarding the use of oral history sources in studying the communist regime and opposition towards it from multiple perspectives. Other speakers touched upon the use of oral history in public projects (such as museums) dealing with the memorialisation of the communist past. Several researchers from the Constantin Ticu Dumitrescu Centre of Oral History of CNSAS spoke about their oral history archive and addressed specific methodological issues concerning the use of this type of historical sources for studying the communist regime and the means used by the Securitate to repress any form of opposition towards it. Finally, some of the speakers underlined the importance of oral history interviews, and of the Oral History Collection at CNSAS in particular, in achieving a better and more nuanced understanding of the anti-communist opposition, as the focus on particular cases illustrates the ethnic differences, the gender particularities, and the other specific circumstances which influenced the way in which the Securitate dealt with each case.