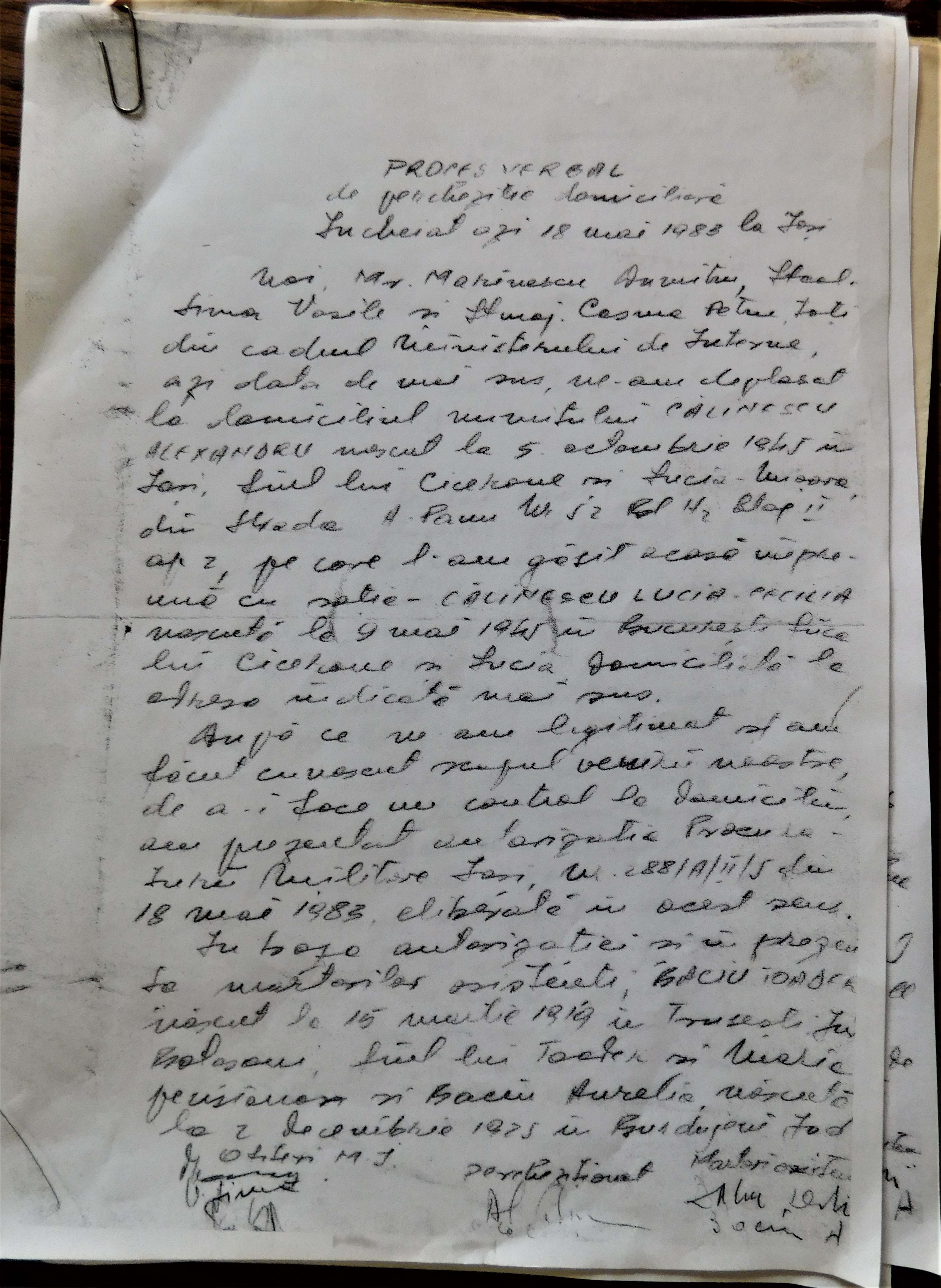 The document issued by the Securitate, the original of which is to be found in the Alexandru Călinescu private collection, is written by hand and now quite hard to read because of its deterioration over time. It is entitled “Minute of home search,” with a clear mention of the date on which this search was carried out: 18 May, 1983. The report has four pages, each of them signed by each of the three representatives of the communist secret police, by those whose home was searched, Alexandru Călinescu and his wife, and by two witnesses. It is mentioned that the search began at 07.00 and finished at 12.45. It is interesting to observe that, as Alexandru Călinescu recalls, similar searches began simultaneously at the homes of other authors who published in the magazine Dialog articles that had been deciphered by various informers and drawn to the attention of the Securitate as failing to conform to official ideology. For it to be seen that so-called socialist legality was respected, the document also mentions that following the search no objection or any form of opposition was expressed by the person searched, namely Alexandru Călinescu.

The minute presents schematically a record of the objects confiscated as a result of this search by the secret police. The materials that aroused the suspicion of the secret police were grouped in thirty-two categories. Most of the objects confiscated consisted, in the order in which they are mentioned in the document issued by the Securitate, of: 1) various hand-written or typed manuscripts; 2) foreign, especially French, newspapers and magazines – a diverse range, from Le Monde to Le Canard enchaîné and from L’Express to Le Nouvel Observateur; 3) books in foreign languages, but not necessarily of an anticommunist character, as can be seen from the example of the two volumes taken from the trilogy The Rosy Crucifixion by Henry Miller; and 4) audio cassettes. A critical reading of this minute gives an idea, with abundant examples, of the scale of the constraints imposed by the communist regime in Romania in the 1980s. The moment of the search is very important in the economy of the Alexandru Călinescu private collection: it was on this occasion that many materials that made up the collection disappeared, as with the exception of the cassettes, none were every returned. This record of the search constitutes the only testimony to the existence of these objects – manuscripts, periodicals, books – in the collection.