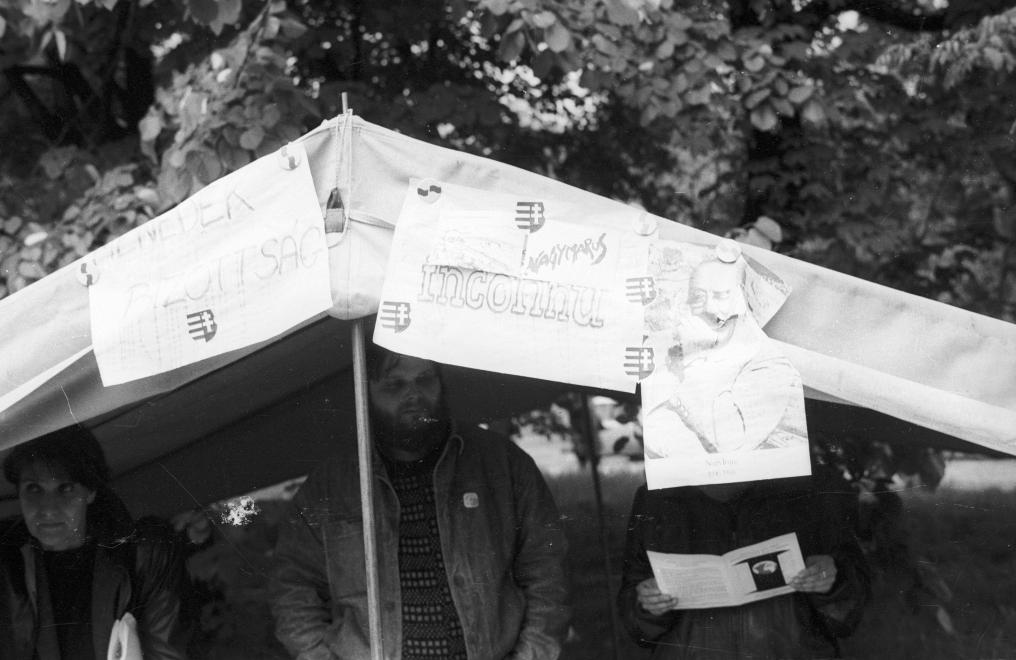 Péter Bokros (1957–2017) was an amateur graphic artist and founding member of the Inconnu group. In the 1970s, he created in a lot of works in alternative, experimental genres, and he participated in many oppositional performances in the framework of the activity of the democratic opposition and the independent initiatives of Inconnu.

His artistic interests and attitude were basically determined by his father’s mindset and opinion of the communist cultural policy. Renitent behaviour was part of his family heritage, as he himself noted. His father had been a student at the University of Applied Art in the 1950s. He told a lot of stories to his son about the repression of avantgarde and surrealist artists.

Bokros grew up in Szolnok. He took the entrance exam to the university five times, but was never admitted. He observed that many talent painters were rejected, while the doors to the institution were wide open for the children of party members. Instead of attending university, he learned artistic techniques from his parents, for example, drawing, ceramics, chalcography, etc. He also learned about computer graphics during a journey to Paris.

His workplace often changed. He sought jobs at places where he could develop his skills, for example positions at decoration companies. As an amateur artist, he could not organize an independent exhibition of his works, and he felt that this rule was unfair. He exhibited his works in different and sometimes unusual places, such as libraries, factories, canteens, and hospitals.

He was a founding member of Inconnu in 1978. According to him, the work of the group in Szolnok had no political implications. They had not wanted to act in opposition to the regime, but rather had merely wanted to enjoy their youth. They had plans and to express ideas which had been inspired by Western art trends. In Bokros’ opinion, they were considered dangerous because of their actions and performances and because they tried to connect directly with the people. He said in his interview that the communist cultural policy could not tolerate their existence.

At the time, it was difficult to learn about avantgarde trends and cultural life in the West. Bokros travelled to Paris, and what he saw there had a profound influence on his artistic vision. Furthermore, his birthplace had an influence on him. In his opinion, “Szolnok was the most communist city in Kádár-system.” The local art groups, which were guided by the ideas of Hungary of the 1950s, attacked Inconnu. In the end, they were banned from every cultural institute and from performing anywhere in the country because of a performance by Bokros in Budapest, which was, as he recalled, one of his strongest body art performances. During the show, they cut themselves with blades.

Bokros was not arrested, but he was put under observation and his residence was searched. After the exhibition entitled “A harcoló város/The Fighting City, 1986,” the members of the group were in even greater danger. They were summoned by the police and threatened with exile from the capital if they were to organize the exhibition.

Bokros was conscripted into the army in 1980, and he spent 14 months in a penalty unit. In 1981, he moved to Budapest and began to study at a decoration and window-dressing school. The other members of the group followed him. Initially, they felt safer in the big city, but after they joined the democratic opposition, the police kept them under even closer observation. They became more and more active and independent. They tried to find their own political stance. During this period, Bokros supported himself as an illegal worker.

Bokros’ criticism of the regime was basically formed by his assessment of the Revolution of 1956, and this was true of the Inconnu group as well. As Bokros said, the events which had taken place on the streets during the revolution and the revolutionary symbols were more interesting to them than the great political programs because of their age.

Bokros gave a long interview to political scientist Ervin Csizmadia in 1992. He shared his views concerning the conflicts and fault lines between the different oppositional groups. He said the young artists who worked together with György Krassó were supporters of actionism, and they had a stronger anti-communist stance, but the intellectuals involved with the samizdat publication Beszélő were more disciplined and organized. He thought that the change of regimes was in fact planned and the majority of oppositional figures did not actually welcome the drastic acts.

After the group broke up, Bokros dealt mainly with mail artworks and, later, computer graphics. He organized independent exhibitions until the late 1990s. In his last years, he faced financial difficulties.