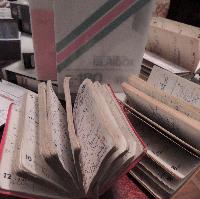 In the Irina Margareta Nistor Private Collection, there are ten notebooks in which are recorded the titles of all the films translated and dubbed before 1989. Basically, these constitute a sui generis inventory of her activity in connection with the translation of video cassettes. The titles of the films recorded in these notebooks respect the criterion of chronology: they are organised by days, months, and years. The entries are made in pen, ballpoint, or pencil. The owner of the notebooks mentions nostalgia as the decisive reason for her having kept them: “The notebooks in which I listed the films help me to recall exactly what I did back then.” The films translated include all possible genres, from Oscar-winners to mediocre productions, from drama to comedy, from romance to police films, from cartoons for children to action films with violent scenes that nowadays would be forbidden to minors. Their common denominator was their Western provenance and their distribution without going through the editing imposed by censorship, which would have resulted in all scenes considered problematic being cut.

Irina Margareta Nistor believes, however, that it is essential that all the translations she made before 1989 be discussed within the binomial “constraint–freedom,” which in this case was no longer defined by the censorship imposed by the communist regime, but by a self-censorship that depended on personal criteria. According to her analysis of her own translation activity, such a discussion “automatically comes round to the terms ‘constraint–freedom.’ On the video cassettes, I translated absolutely everything. Apart from the swear words – and I would like to dwell a little on those. When I was putting my voice on the video cassettes, I didn’t translate exactly how they swore in English. But this wasn’t a matter of censorship. It was a matter of upbringing. In my home, no one ever swore; my parents didn’t swear; my grandparents didn’t swear. And I couldn’t say such things either. We had political prisoners in our family. And I knew about those methods of torture – when they made them swear at their dead, their mothers, brothers, fathers, sisters. With hard swearing. And I said: ‘I don’t want my voice to turn into a torturer’s voice.’ From outside, what I’ve just told you may sound peculiar. It’s not at all. It seems to me perfectly normal to refuse to swear. No one was censoring me – as some might perhaps think. The communists swore horribly. I could have put those swear words on the video cassettes. When they got angry, they could swear like anything. And that includes the women. But I refused to do it.”
czytaj więcej 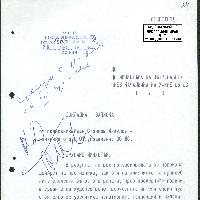 Note on the artistic intelligentsia 1984

"Report by Ivan Stoyanov Yankulov, Head of Division 01, Section 06 – State Security", Sofia, 30 January 1984, to the Minister of the Interior.

The officer reports about the strengthening of "negative tendencies" to be observed lately among the intelligentsia. These are said to be due the stepped-up afforts of the "enemy" as well as the activities of "hostile elements" inside the country. The report also detailed the problems of the state security's work among the artistic intelligentsia because of their distrust, of their closed way of life or of their high professional or social status. Therefore, it is suggested, the development and monitoring of this category of persons should be carried out by technical means. The document, thus, indicates growing resentment of the regime by the intelligentsia and shows the ways, how the statet security evaluated the effectiveness of its own work.
czytaj więcej
Notebook of Meilė Lukšienė

A notebook with transcripts and notes made by Lukšienė during meetings of the Department of Lithuanian Literature (1957-1958). These notes reveal discussions by members of the department and guests from the Party and government institutions about directions in research and teaching. For example, from one note, we can see a polemic on what should be considered as liberalism, and what the bourgeois democratic movement was, and how to deal with Vincas Kudirka and Jonas Mačiulis-Maironis. The leading Soviet ideologues Romas Šarmaitis (1909-1995) and Juozas Žiugžda (1893-1979) participated in this meeting at the Department of Lithuanian Literature, imposing their very  negative attitudes towards these famous Lithuanian poets. 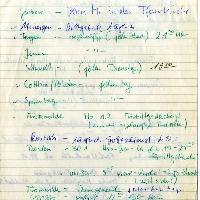 On 17 January 1988, around the periphery of the traditional march commemorating Rosa Luxemburg and Karl Liebknecht, which had long since become a mere ritual, a group of protestors unfurled a banner with the famous words of Luxemburg “Freedom is always and exclusively freedom for the one who think differently.” They, along with many other protestors were arrested at the end of the demonstration, with some being forcibly extradited from the GDR against their will. This measure and its consequences are a key element in the prehistory of the “Wende” of 1989. Owing to the lack of publicity, little was known about the events or the protests and solidarity demonstrations which followed it.

As a result, the so-called “Telephone Contact group” was created in Berlin. They distributed their number across the GDR via the structures of the church. Similar to an autonomous investigation committee, the group gathered information on the reactions (and mood) in the country. The notes which have been preserved here pinpoint where and when demonstrations and other acts of solidarity with the “Luxemburg-Liebknecht demonstrators” could be found. Marianne Birthler, who would later go on to become the Federal Commissioner for the Documents of the State Security Service of the former GDR, also belonged to the “Telephone Contact Group” and passed this on to the Robert-Havemann Society.

This essay is an integral part of the Dinko Tomašić collection. He also used it in his sociological research. Nowotny's account of journalism under communism criticizes the actions of the authorities which eviscerated journalism all professional criteria. Nowotny, as a former member of the counter-intelligence service, emphasized in the introduction to the essay that there were very few journalists in Yugoslavia before the war and revolution devoted to “advanced ideas” or communist ideology. As a result of emigration, and because many journalists were killed or jailed, while others were fired because of their “petit-bourgeois attitudes,” professional journalism virtually disappeared during the course of revolutionary events.

Those few remaining journalists who were even loyal to the communist government were under constant and strict control by the authorities and had to exercise self-censorship out of fear, so that in any new journalism after the revolution, any criticism of both political authority and the state was entirely excluded from society. Nowotny cited the case of cartoonist Andrija Maurović, who joined the Partisans in 1943. After the war, he refused to join the Party because of his disappointment with the regime. He personally confided to the author of this essay that he was thinking about leaving the country due to “false socialist policies.” Although Maurović propagated the Partisan communist movement very much, in the late 1940s he came under regime criticism because his artistic work demonstrated “non-socialist” tendencies.