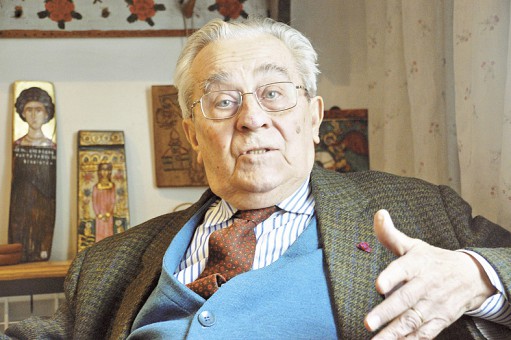 Mircea Carp is one of the best known Romanian journalists who worked for the radio stations Voice of America and RFE. Carp was an uncomfortable journalist for the communist regime in Bucharest because of the critical message he conveyed in his radio programmes, which were very popular in Romania.

Mircea Carp was born on 28 January 1923 in Gherla (Cluj county) in a family with roots in the nobility, with a long intellectual and military tradition. Following in the footsteps of his father, who was a career officer, Mircea Carp enrolled in the military high school, and then, in 1942, he was admitted to the School of Cavalry Officers and sent to Germany for specialised studies. He fought in the Romanian army against the USSR, but also against Nazi Germany, after Romania left the Axis Alliance on 23 August 1944. In August 1946 he was purged from the Romanian army for political reasons, and in August 1947 he was arrested and interrogated for his anti-communist convictions and activity. Because no evidence against him was found, he was released shortly after. After the forced resignation of King Michael I in December 1947, Carp decided to head for the West, wishing to join the opposition against the communist regime as part of the Romanian exile. In January 1948, Carp managed to cross illegally the border between Romania and Hungary and to reach Austria, where he worked for the American military mission until 1951, when he emigrated to the USA. Here he joined the Press and Documentation Department of the National Committee for a Free Europe, being in charge of editing the magazine Cronica Românescă (The Romanian Chronicle). This anti-communist organisation had been founded in New York in 1949 in order to increase American influence in Europe and to limit that of the Soviet Union. A year later, the National Committee for a Free Europe created the radio station RFE, which it continued to manage.

Starting from 1969, Carp visited Romania several times, as an American journalist accredited to Bucharest, or as a member of certain American official delegations, such as the one that accompanied President Richard Nixon during his official visit to Romania in 1969. As shown by his surveillance file compiled by the Securitate, Mircea Carp was perceived as an enemy by the political police because in his radio shows he virulently criticised the communist regime in Romania. As a result, Carp was followed by Securitate during his visits to Romania, and his correspondence with friends and family in Romania was carefully monitored. After 1995, Mircea Carp published two biographical volumes. The first, entitled Vocea Americii în România, 1969–1978 (Voice of America in Romania, 1969–1978), focuses on the activity of the Romanian section of the radio station, whereas the second is a volume of memoirs whose title reminds us of the words with which Carp used to end his radio programme at RFE: Aici Mircea Carp, să auzim numai de bine! (This is Mircea Carp, wishing you all the best!).