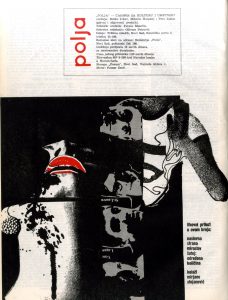 Polja magazine [Fields in English], is one of the longest running periodicals in the former Yugoslavia, and was first published in 1955 in Novi Sad. Throughout 506 issues, Polja has covered important periods in Yugoslav cultural history and has featured young authors in the fields of literature, cultural theory, and literary and film criticism. The magazine has a history of providing a platform for social criticism, as it became inseparable from the youth-led organization Tribina mladih [Tribune of Youth] which criticized the social and political situation in the country and the culture of its time.