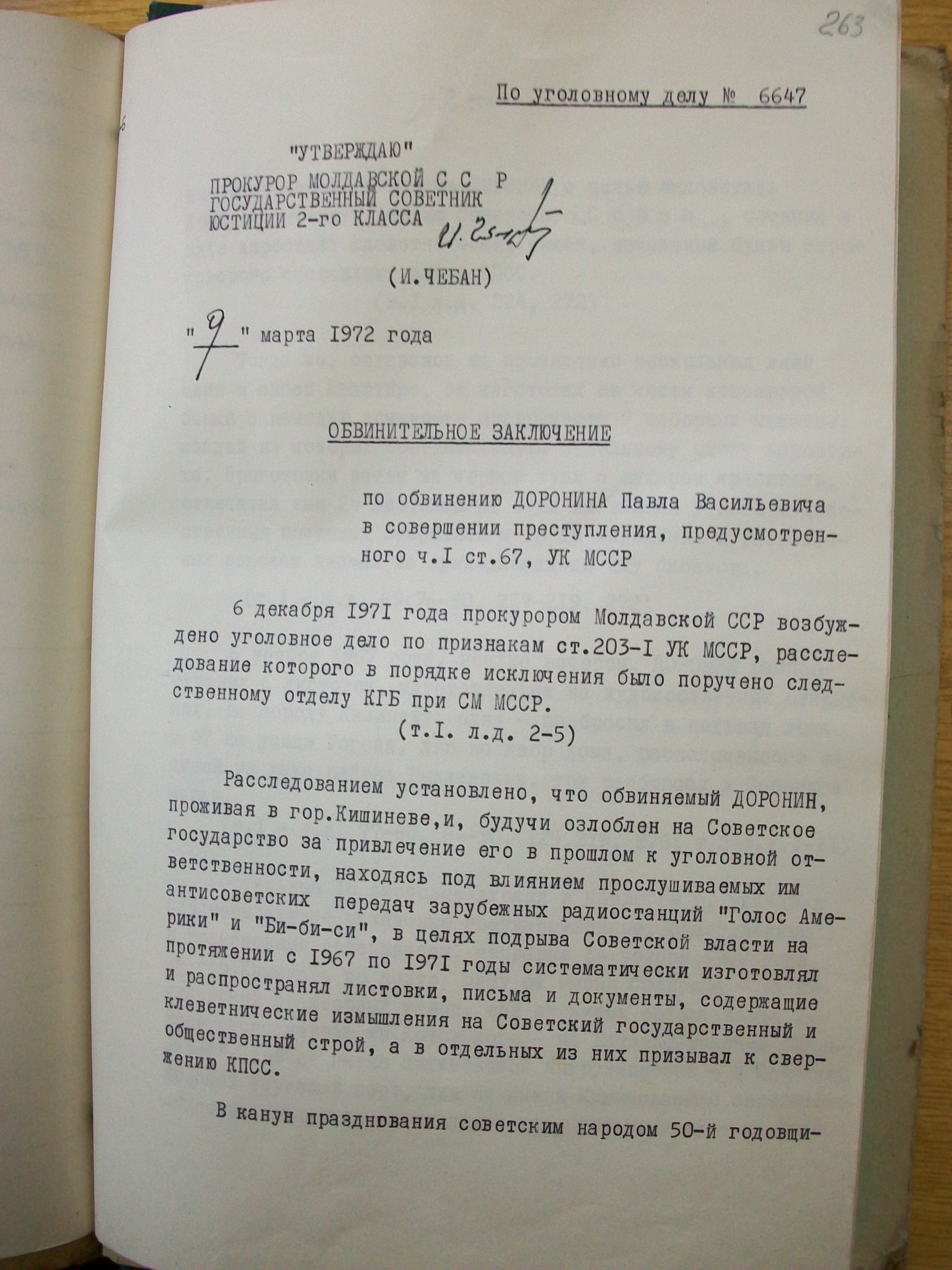 The official accusatory act concerning the case of Pavel Doronin (case No. 6647) was issued by the KGB investigator, Lieutenant Filatov, on 6 March 1972, when it was approved by the head of the Investigative Section of the KGB, Lieutenant-Colonel Kulikov, and by the Head of the Moldavian KGB, Major General Chvertko. Three days later, on 9 March 1972, this document was also approved by the Prosecutor General of the Moldavian SSR, I. Ceban. This document summarized the main ”anti-Soviet” activities carried out by Pavel Doronin between 1967 and 1971, providing a synthetic narrative of his subversive actions. The motivations of the defendant were linked to the impact of the “anti-Soviet broadcasts of the foreign radio stations Voice of America and BBC,” as well as to the discontent of the accused due to his earlier criminal conviction by the Soviet authorities. Concretely, Doronin was accused of “undermining Soviet power” through “systematically producing and spreading leaflets, letters and other documents which contained calumnies and false assertions regarding the Soviet political and social order, while some of them included open appeals to overthrow the CPSU.” The accusatory act carefully reviewed the main stages of Doronin’s activities, starting from the leaflets he spread in Chișinău and sent to a number of Soviet institutions in November 1967. The document also described the letters Doronin sent to several Soviet newspapers with critical reactions toward various aspects of the Soviet regime, as well as the anti-Soviet messages which the accused wrote on a number of banknotes in vanishing ink. The summary of Doronin’s “anti-Soviet” actions also emphasized the subversive nature of the texts he composed on behalf of several fictitious Jewish organizations or groups of Soviet citizens of Jewish origin in which he “expressed his solidarity with Zionist organizations in connection with the anti-Soviet activities pursued by” the latter. The presence of the “Jewish question” in Doronin’s texts and, especially, his ostensibly pro-Jewish position deserve special attention. The problem of Jewish emigration from the USSR and the anti-Israel stance of Soviet foreign policy during the late 1960s and early 1970s, in the aftermath of the Six Day War and in the context of the debate on human rights which was gaining prominence in that period featured prominently in the Soviet press and were used by Doronin as a conscious strategy to attract the attention of the Soviet authorities. It is interesting that during the investigation he confessed that his frequent references to the “Jewish question” were meant to draw a reaction from the authorities and, rather than pointing to a pro-Jewish position, derived in fact from his anti-Semitism. This example is revealing of how Doronin used and manipulated Soviet official rhetoric in order to achieve his own goals. The accusatory act also mentioned the material evidence (protocols of searches, various expert assessments, witness accounts and the reconstruction of Doronin’s actions during the inquiry) that purportedly proved the guilt of the defendant. Doronin was accused according to article 67, part 1, of the Criminal Code of the Moldavian SSR (“anti-Soviet agitation and propaganda aimed at undermining Soviet power”). As in other similar cases, the sentence reproduced almost literally the text of the accusatory act. This document is revealing for the mechanism used by the Soviet justice system to define and classify various “anti-Soviet” actions and for the criteria applied in order to deem an individual as potentially dangerous for the regime.