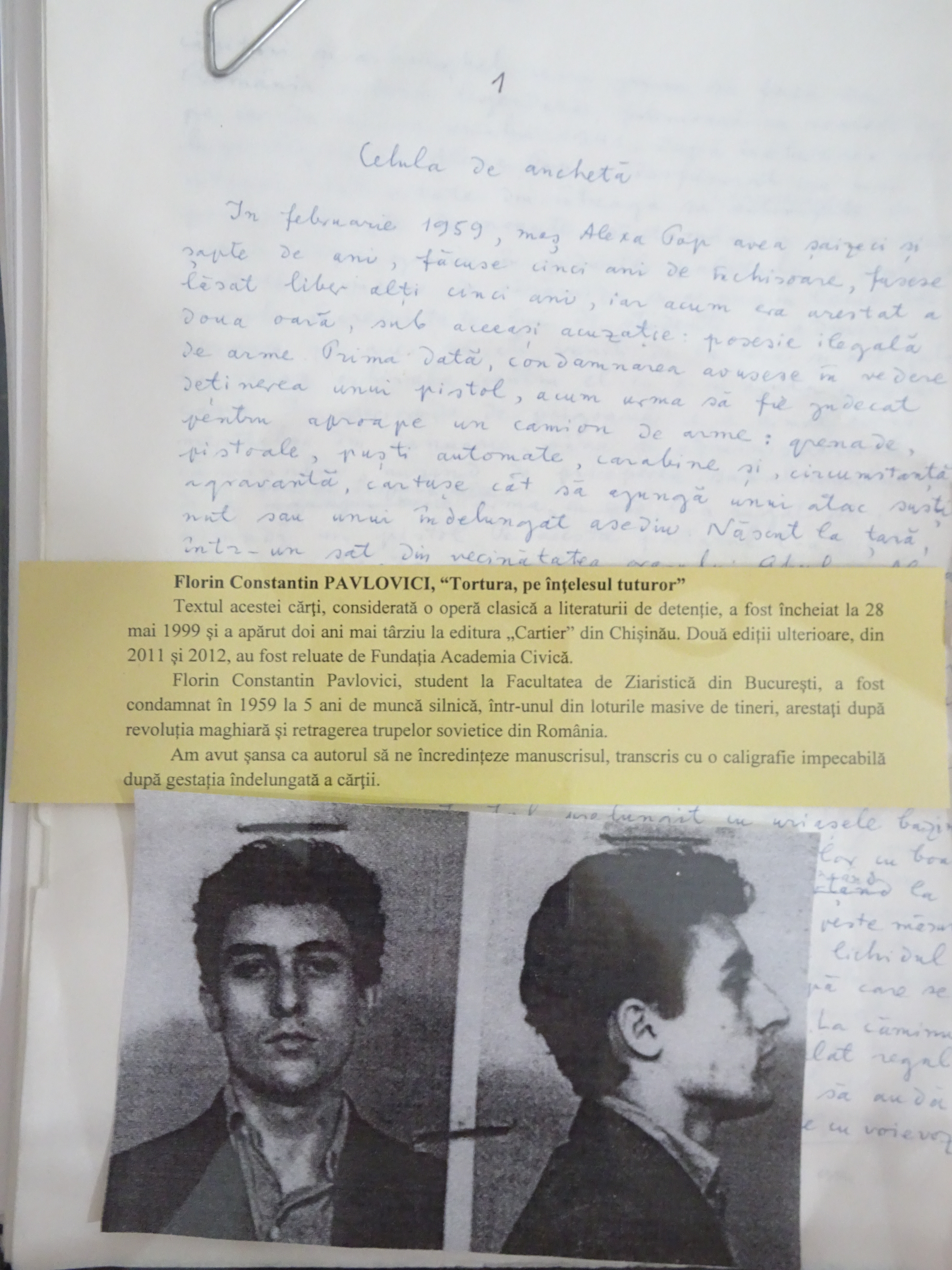 The several hundred pages that make up the manuscript of the book Tortura pe înțelesul tuturor (Torture made intelligible to all) have been in the possession of the Sighet Memorial for seven years. The original manuscript was donated after the publication of the second edition of the book by the Civic Academy Foundation. “The first edition of the book was published in Chişinău; for the Romanian edition, he chose us, and on that occasion he gave us the original manuscript of the book, partly with a view to the preparation of an exhibition of manuscripts. Since 2011, it has been the property of the Sighet Memorial,” explains Ioana Boca, the executive director of the Civic Academy Foundation, the historian of this donation.

Like the other memoirs of the Romanian Gulag, this book whose manuscript is in the Museum was in fact written after the fall of communism. Before 1989, such memoirs were only written in exile. In comparison with other memorialistic works of the same type, this book deserves special attention, because it enjoyed an impressive critical reception. In his Istoria critică a literaturii române (Critical history of Romanian literature), Nicolae Manolescu remarks that the book is an outstanding example of the literature inspired by communist detention in Romania: “Two things are striking in Pavlovici’s recollections, apart from his immense literary talent: the capacity to suggest, without a trace of emphasis or of the desire for revenge, the banality of evil, as it was characterised by Hannah Arendt; and the pince-sans-rire humour, often black, that the author proves himself capable of, even in the face of the most horrible atrocities. His arrest and his passage through all sorts of evil places are very close to the absurdities of Kafka. However the neutral tone, the voice that is never raised, the ironic commentary, irreverent but never cynical, bring out of bestial behaviour and terrible experiences not only salutary lessons, but also a bearable, positive appreciation of human nature, which is never irreversibly corrupted.” Ruxandra Cesereanu too appreciates that “the exceptional merit of Florin Constantin Pavlovici is that it presents the infrastructure (minutely analysed from a psychological and socio-political point of view) of the apparatus of repression in communist Romania with the narrative tools of a refined intellectual. His story has subjective value, but it also offers the matrix for an understanding of what the Romanian Gulag was and how it functioned.”

The pages making up this original manuscript of the book Torture Made Intelligible to All are displayed in Room 70 of the Sighet Memorial, on the second floor of the building. This room is dedicated to “The Memory of Manuscripts,” those texts that for the communist regime constituted “hostile writings.” The Museum guide characterises the collection of manuscripts in this room as follows: “Whether they were confiscated, or circulated clandestinely, or led to the sentencing of their authors, or mark their destiny in the prison system, they are linked by that purity of expression that is the mark of true literature. Together with the manuscript donated to the Sighet Memorial by Florin Constantin Pavlovici, Room 70 also houses, original manuscripts or copies of Jurnalul fericirii (Journal of happiness) by Nicolae Steinhardt, Testamentul din morgă (Testament from the Morgue) by Remus Radina, Așteptând ceasul de apoi (Waiting for the day of judgement) by Dinu Pillat, Drumul crucii (The way of the Cross) by Aurel State, and Istoria Partidului Național Țarănesc (The history of the National Peasant Party) by Ioan Marta. It also houses correspondence of Gheorghe I. Brătianu, Silviu Dragomir, Corneliu Coposu, Cicerone Ionițoiu, and Mircea Carp.