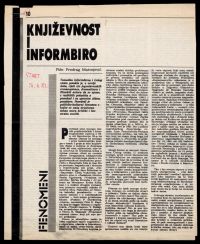 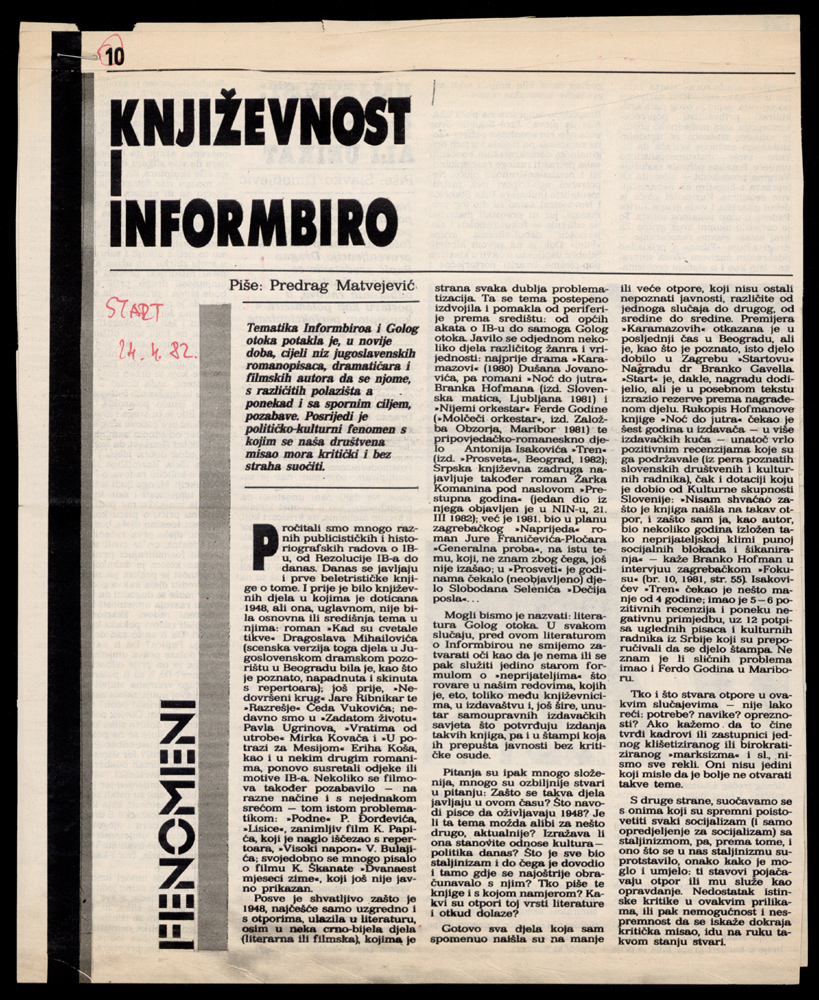 “Literature and the Cominform” is a newspaper article written by Predrag Matvejević (Mostar, 7 October 1932 – Zagreb, 2 February 2017) in which he critically reviews the breaking of the taboo on the Tito-Stalin Split (Yugoslav-Soviet Split) in 1948 and the Goli otok prison camp, and their analysis in Yugoslav literature, theatre and film in the early 1980s.

The review was published in magazine Start on 24 April 1982. It was founded by newspaper company Vjesnik on 29 January 1969 as a semi-monthly automobile magazine. In the period 1969-1972, when it was edited by Andrinko Krile, such topics were soon left behind, and the magazine focused on interviews about topics avoided in other magazines, and by the mid-1970s it became a magazine that covered politics, culture and the media, to which the most prominent Croatian journalists and intellectuals contributed. Krile was removed from his post as a member of the Croatian Spring, and it was assessed that Start had “succumbed to the base impact of the West and was a part of the Westernisation of Croatia.” According to Božidar Novak, after the Croatian Spring was suppressed, the magazine was rigidly censured, and until the July 1973 it was obliged to pay the so-called “trash tax.” In the period 1973-1980, under editor Sead Saračević, it acquired a new form and journalistic expression. Topics like so-called high culture were added, the works of the world’s top artistic photographers were regularly published, and a prominent place was accorded to feuilletons on political and historical themes. In the period 1980-1987, under editor Mladen Pleše, the magazine focused on new topics such as rock and roll and it highlighted the writings of social analysts and covered sensitive domestic policy topics. This put the magazine in a difficult position, because the political leadership maintained strict watch to ensure that the policy of “With Tito after Tito” was not violated. Political pressure continued when liberal and critical politicians and scholars began to speak in the magazine’s pages. The magazine continued to come out until 22 June 1991.

The article described above, like many other articles published in Start encompassed in the collection, are available for research and copying.