The Seeds of Fear 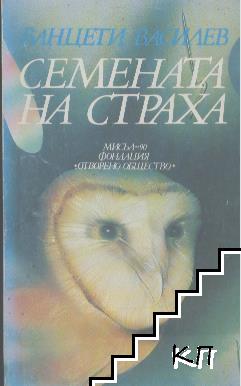 The book Semenata na straha [The Seeds of Fear] was conceived of and written by Vantzeti Vassilev in the 1980s. In it, the author narrates the memories of his father Dimitar Vasilev Stoyanov, and of memories of his father's friends and former prisoners. For fear of revealing those who had shared their experiences to the state authorities, Vantzeti destroyed all his notes.

In 1988, Vantzeti Vassilev fled to Serbia, from where he moved on to Italy and, eventually, to New York in 1989. During his escape, Vassilev managed to bring out a copy of the manuscript Semenata na straha [The Seeds of Fear]. Another copy of the manuscript remained hidden at home, in the ceiling of his old barn, where he recovered it in 2016. In New York, Vantzeti Vassilev became an author of autobiographic novels. He also finished Semenata na straha [The Seeds of Fear] as a first-person account of the humiliation and impasse of a young scientist under the conditions of a totalitarian regime. The book was published in Sofia in 1991 with the financial support of Open Society Institute and then presented in New York.

Due to its success, the book was re-issued in 2011 and presented on various occasions, widely covered by the media.