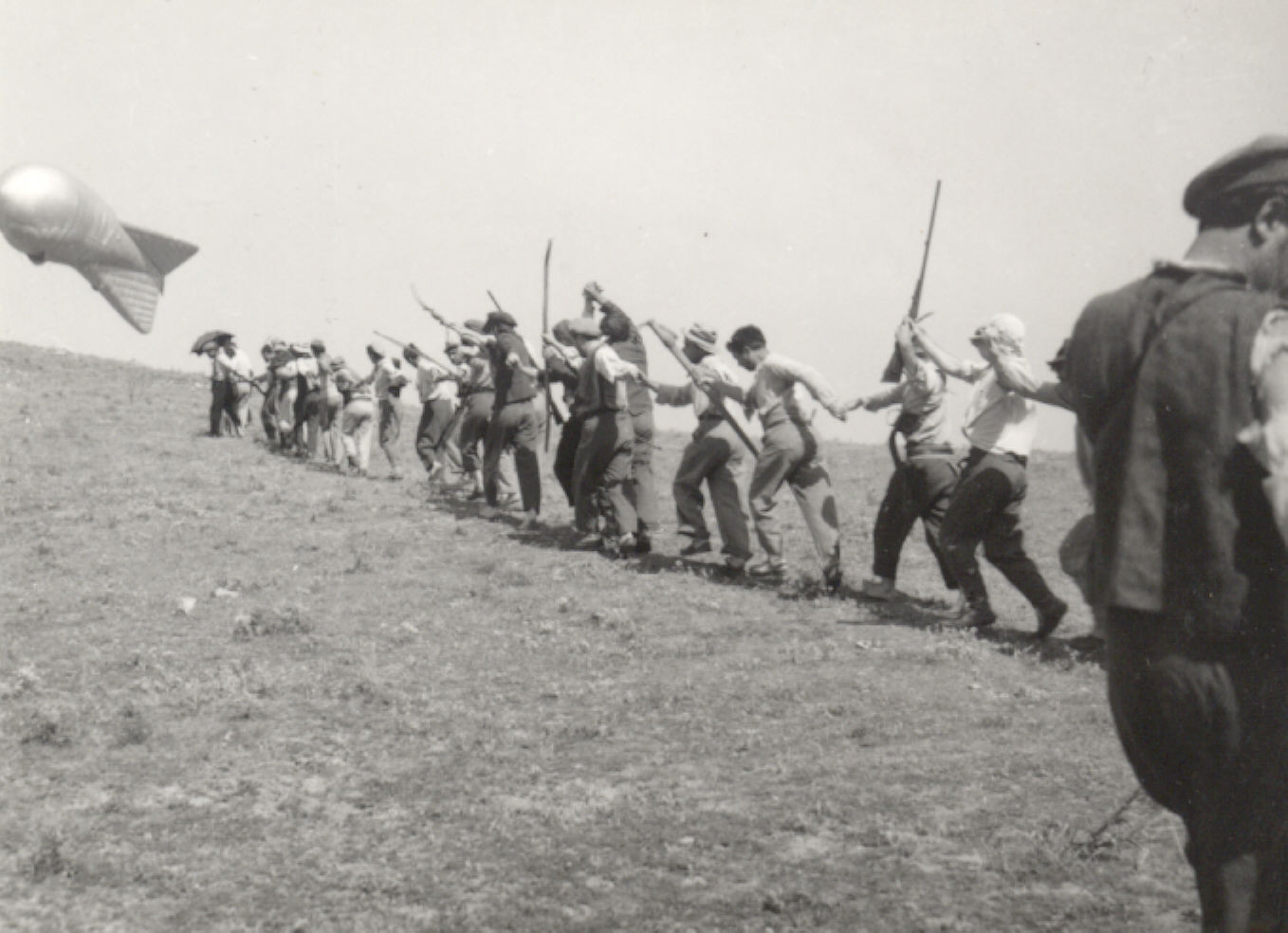 In 1967 Binka Zhelyazkova shot the movie "The Tied Up Balloon" (1967) after the script of Yordan Radichkov based on his short novel of the same name. Zhelyazkova created the film after five years of silence for the bureaucratic apparatus had banned her from shooting after her first two movies from the late 1950s and the early 1960s.

"The Tied Up Balloon" is based on a true story – the breaking off of a military aerostat during World War II which flew over a small Bulgarian village. The villagers decide to chase the balloon in order to make themselves shirts and pants from its silk material. The pursuit of the balloon is rendered by multiple tragicomic situations. Gradually, the villagers forget the initial impulse for the chase of the balloon, forget the feud with the villagers from the neighbouring village with whom they fought for the balloon. In their attempt to reach the balloon they rise in spirit. Finally, the balloon falls on the ground and the men catch it but in that very moment the military police force arrives and in order to save the balloon the villagers let it fly away. However, instead of flying away the balloon makes a turn and tries to fight the soldiers but in the end it is "deadly" shot.

The leitmotif of the film is a running barefoot and speechless girl in white – a peculiar projection of the balloon which flew away towards freedom. Just like the balloon, the girl is running; at times she is hiding from the villagers, at times she is dancing a chain dance with them; in the end, just like the balloon, she is shot by one of the villagers, by one of her own. With this character, Binka Zhelyazkova expressed her own feeling of pursuit, of impasse and as the analysts interpreted it of what would have happened after the shooting of the movie (Станимирова, Братоева).

The film is a modern, stylized cinema reading of Yordan Radichkov's work, a complex mixture of comic and tragic, rich of colourful characters and situations which outline the multilayered Bulgarian national character.

The film is a rebellion against the standards of the socialist art – the conscious breaking of the plot in pieces, the rich metaphors and the pessimistic disharmony in the end of the movie (the death of the girl and the burst of the balloon) define the style of Zhelyazkova and Radichkov as "magic realism". "Long before Kusturica, with her Balkan temper and emotion, she had created in cinema the same "reality striving for the sky" with which he conquered the world." (Станимирова 2012: 243)

The movie was finished in spite of the many bureaucratic obstacles in front of the team. The film participated in the International Cinema Festival "Expo 67" in Montreal and was bought for distribution in Europe and America. Nevertheless, the Bulgarian side recalled the movie, cancelled the contract for its purchase and paid a penalty in dollars. The Bulgarian cinematography refused to let the movie participate at the international cinema festival in Venice. The film was shown for a short period of time at a cinema theatre in order to avoid an official ban. Afterwards, it was taken off the cinema for more than two decades. The party document revealing the attitude of the authorities remained hidden; it wasn't published but sent as a circular letter to all sections – party committees, cultural institutes: "...the recent film of the director Binka Zhelyazkova, "The Tied Up Balloon", causes serious anxiety. The director turned some negative sides of the script into an entire movie concept. The events and characters are developed in the light of pessimism and distrust of man. Contrary to the truth to historical facts, the Bulgarian villagers of the period of World War II are depicted as a half-savage crowd. The movie is a mockery of man, of the human and national dignity, of the historical traditions and the heroic struggles of the Bulgarian nation." (cited after Станимирова 2012: 247-248)

Only in the early 1989, the film was shown at the Berlin International Film Festival in Western Berlin (later called Berlinale).