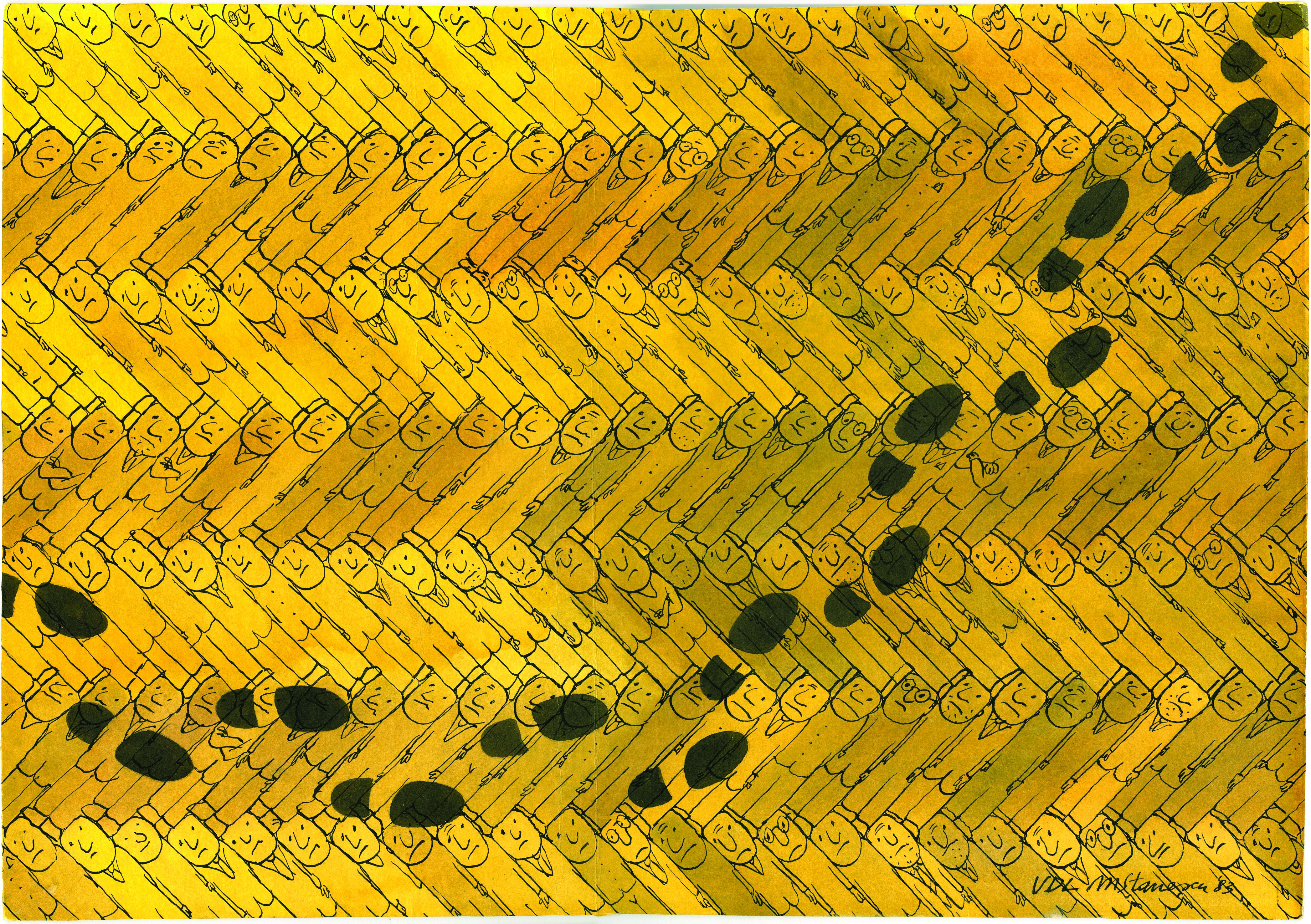 Clearly dated 1983, the cartoon “Working Visit” was probably among those withdrawn from the exhibition at the Eforie Gallery that year. It was subsequently omitted from the volumes later prepared by Mihai Stănescu before 1989, but it was included in the volume Best of Stănescu, which comprises works from the period 1979–1989 and was published in 2009 on the occasion of the twentieth anniversary of the fall of communism. The cartoon “Working Visit” shows a crowd of people drawn like parquet pieces on which footprints can be seen. The drawing mocks in a tragic-comic key the so-called “working visits” made by the secretary general of the Party, Nicolae Ceauşescu, together with his suite of communist officials, to various cities, to factories, building sites, and cultivated fields. These working visits, unknown in the time of Gheorghe Gheorghiu-Dej but introduced and intensely promoted by Ceauşescu, followed broadly the same pattern: the Party delegation, led by Ceauşescu himself and in most cases also including his wife Elena, travelled to various “objectives.” There they were greeted by the local authorities and frenetically applauded by crowds of people specially mobilised to give the distinguished guests a long ovation. During these visits, Ceauşescu formulated so-called “precious indications” regarding what ought to be done in the factory, building site, or agricultural cooperative that he was visiting. Once launched, these “indications” became the letter of the law, no matter how absurd they were, and those on whom they had been bestowed dared not contradict them, even when specialists understood that they could produce disastrous effects. In essence, the “indications” symbolised the arbitrary character of decisions in a dictatorial regime. At the same time, for the presidential couple as for the rest of the officials of the communist regime, these “working visits” constituted what we would today call an image-building exercise. At the time, they were an obligatory element in the complex arsenal of the personality cult. For the crowds of people brought to attend these working visits, they were an exercise in accepted humiliation. This is what Mihai Stănescu manages to show through the cartoon “Working Visit.” This cartoon is one of the most well-known works in his portfolio, and indeed in the history of Romanian cartoons under communism.