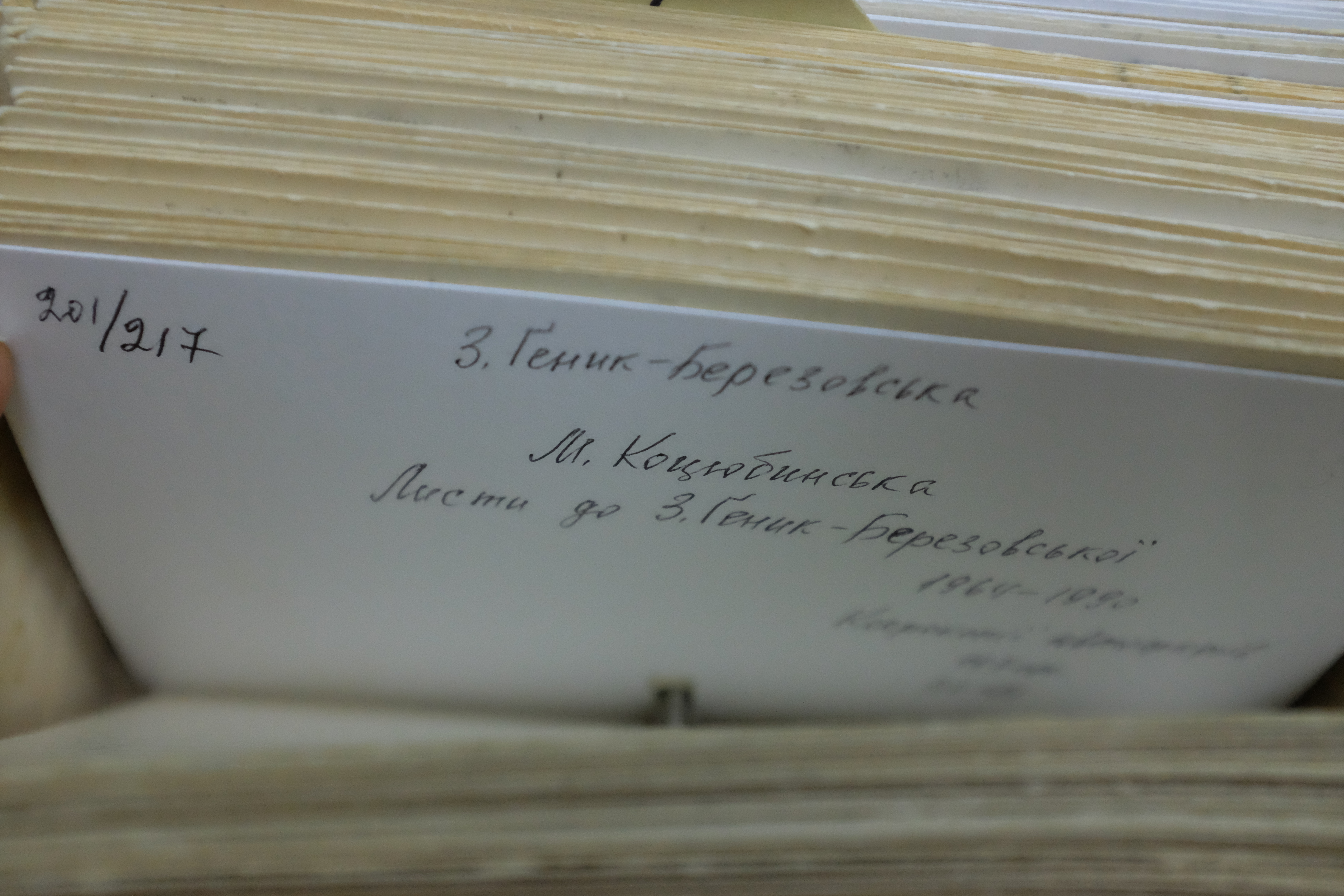 Mykhailyna Khomivna Kotsiubynska and Zina Genyk-Berezovska became acquainted in Kyiv during a visit by the latter to the Ukrainian capital in 1964. They became fast friends, Kotsiubynska’s letters accounting for more than a third of the letters sent to Genyk-Berezovska. The letters are now held and the T.H. Shevchenko Institute of Literature in Kyiv, Ukraine. The entire correspondence is the byproduct of a close female friendship, one that was deep and forged during a difficult time.

The three letters sent in 1965 show that these two were under surveillance, as their letters were often lost, or more likely confiscated in transit. Kotsiubynska's letter from July 30, 1965 asks why there has not been any word from Genyk-Berezovska. Kostiubynska was particularly aggrieved because she had sent an important letter in which she wrote among other things about the death of a close relative and Kotsiubynska's adoption of her four-year-old daughter. Genyk-Berezovska wrote back sometime later, prompting Kotsiubynska to write a letter on August 21, 1965, underscoring how important this correspondence was to her and asking Genyk-Berezovska to write more frequently. The letter from September 30, 1965, opens with "Zinochka, my dear bumble bee!" Kotsiubynska asks why she has not heard from Genyk-Berezovska and wonders whether she is ok. Kotsiubynska writes that she misses Genyk-Berezovska greatly, especially given what is happening in Ukraine at this time. In Aesopian language, Kotsiubynska explains that things are not going well and that one of their friends has been arrested. "Things are not fun for us right now. Our friend, who has not written you for so long, will not be able to write you again for some time. And it is not his fault." She also asks whether Genyk-Berezovska received an earlier letter, presumably in order to ascertain whether it might have been intercepted by the state security services.

When one reads back letters sent between these two women--especially those written in the late 1960s and early 1970s--one can feel the stresses of not being able to communicate regularly and with any certainty. This weighs heavily on Kotsiubynska, who is also under pressure and surveillance from the authorities. In May 1966, she asks Genyk-Berezovska if she has received a letter from Ivan, referring to Svitlychny, who had been released on April 30, 1966 for being "socially harmless." Apparently, his stature and popularity had been so great and the protests against his arrests so numerous, that the authorities opted to release him. The following year, Kotsiubynska wrote two letters that were only ten days apart--July 5 and july 15. In the first, she tells Genyk-Berezovska that she has been fired from her job and expelled from the Communist party. In the second, she says simply "this year has worn me down completely." Through their correspondence, one senses the immense psychological pressure facing literary scholars and human rights activists in Ukraine at this time, though one would also have to read Genyk Berezovska's responses in order to have the complete picture.