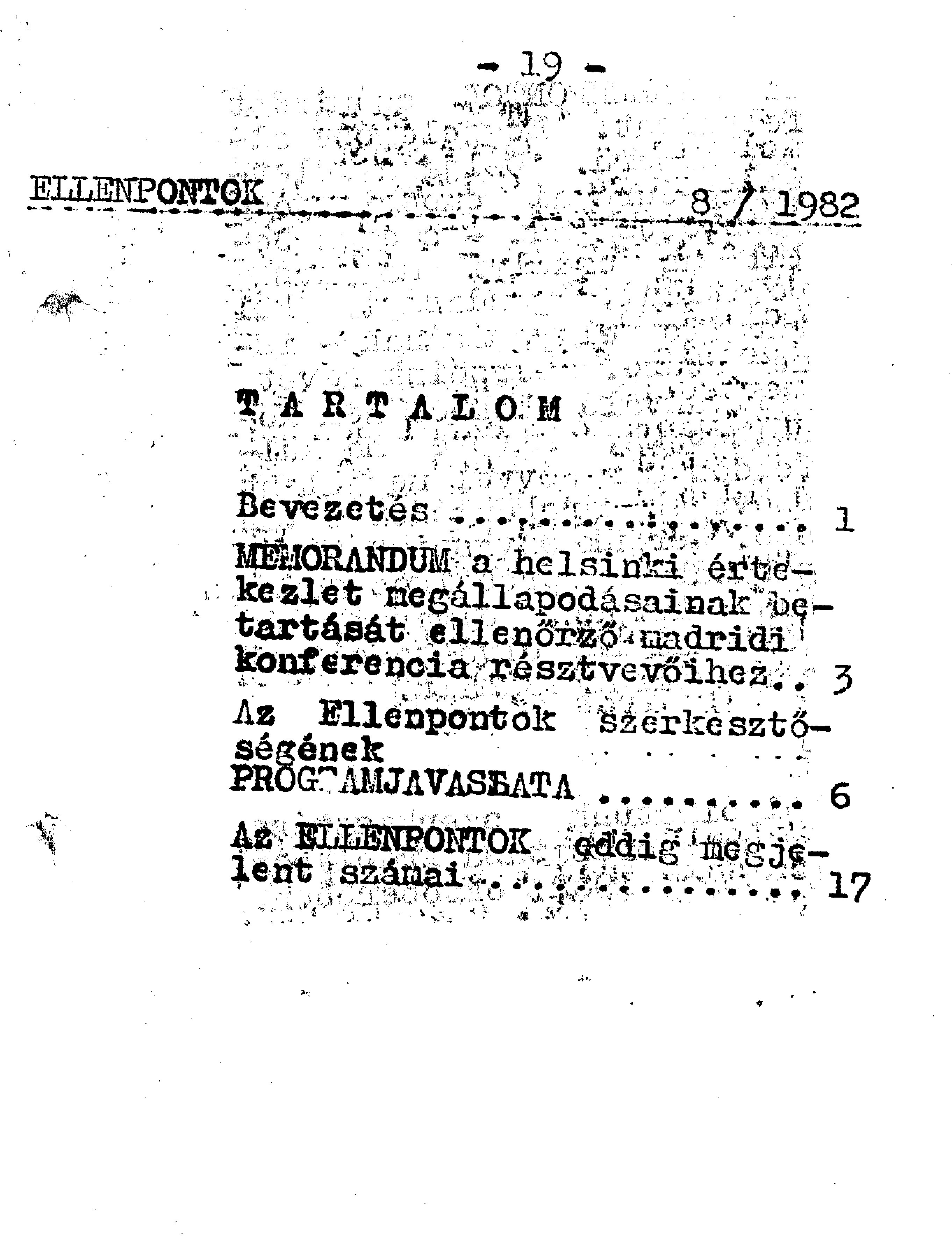 This issue numbers only fourteen pages and comprises the “Introduction” signed by Attila Ara-Kovács and Antal Károly Tóth’s “Memorandum” and “Programme Proposal,” together with a presentation of the contents of the previously published seven issues. At the time of publishing the editors placed their hope in the “inner and activated” resistance of the population and on “the support of Hungary and of the democratic powers of the world,” while expecting repressive actions against themselves. In their effort to change the system “they saw a friend, a supportive partner with sober judgment in everyone who detested tyranny, and especially in the Romanian people.” They stated that they were ready to share their dedication and solidarity with all of their Romanian friends and fellow sufferers in order to regain their common freedom. Moreover, the authors found it important to underline that “this solidarity, this dedication does not convey and bear any hidden intentions.”

The “Memorandum” which was also sent to the participants of the Madrid CSCE Follow-up Conference, takes a stand in favour of the Hungarian minority, providing a brief account of the ethnic policy of Ceaușescu’s regime, the measures aimed at assimilation and as the methods applied to hamper the preservation and development of the Transylvanian Hungarian collective identity. It highlights the concept of second-class citizenship and the lack of possibilities of self-defence, the nonexistence of community interest groups. It pointed out that the chances of changing the situation are most affected by the fact that international conventions fail to take a stand with regard to the collective rights of minorities and that the mode of approach applied in international practice that only considers the point of view of human rights, ignores the values inherent in an ethnic minority, a community marked by rich tradition, particular culture and collective identity. The editors argue that minority values should deserve separate protection in contrast to those of the majority population which enjoy a dominant position. They state that an international effort which tries to protect the rights of minorities without taking into consideration their group character involuntarily places them at the mercy of the majority. In order to change their disenfranchised situation, the editors request that the conventions about to be concluded at the Madrid Conference should include the rights of Transylvanian Hungarians to preserve their values. The “Memorandum” summarises the aspirations of the editors in four paragraphs in which they ask that the Transylvanian Hungarians be allowed the possibility to feel that they are an organic part of the Hungarian nation “and thus all ethnic minorities should be granted equal rights,” that they might preserve their particular collective values and be able to create an organisation to promote their independent interests. They see a guarantee for the enforcement of these rights in the establishment of an impartial international committee.

They annexed a “Programme Proposal” to the “Memorandum,” in which they formulated in detail the most important demands in with of solving the situation of the Transylvanian Hungarians in communist Romania. The six-page document explains that the rights necessary for survival exist merely in theory and underlines the strong discrepancy between the situation depicted in official declarations or speeches and the everyday practice. Under these circumstances, demanding any rights seems an impossible mission. Moreover, the approval of any motion whatsoever is unimaginable without the proper intervention of some influential personality. Based on the assumption that two ethnic groups can only live together side-by-side if they treat each other as equal partners, the editors requested that Hungarians in Romania be granted the possibility “to freely demand the defence of their rights and interests.” They were aware of the improper timing of their demand as “even cultural claims formulated in pretentious language were openly labelled as reclaiming-revisionist.” They were also aware that although the Eastern European situation rendered the chances of seeing such claims solved entirely impossible, the worsening conditions forced them to take action considering that, as they themselves explained: “we cannot afford the luxury of waiting for a miracle to happen if we want to see a change.”

The “Programme Proposal” formulates the “demands” in ten paragraphs that occasionally make necessary the inclusion of several subparagraphs. The first demand repeats the first paragraph of the “Memorandum,” namely, that the Hungarians in Romania should be considered as an organic part of the entire Hungarian nation, and, as Romanian citizens, they should have the right to freely maintain their contacts with the Hungarian People’s Republic “both on an institutional and an individual level.” They also added another nine subparagraphs in which, among others things, they touched on the right to travel freely, the abolition of the regulation concerning the accommodation of foreign friends and of the practice of confiscating Hungarian cultural products at the customs, the right to freely invite Hungarian bands and personalities from the neighbouring countries, and the right of Transylvanians to have access to Hungarian TV channels as well as to books and publications from outside Romania which were in the Hungarian language.

The second “demand” asks for an institutional framework which would allow the cultural autonomy and the preservation of the collective identity of the Hungarian minority in Romania. This demand is detailed in eighteen subparagraphs. They demand that art. 22 of the 1965 Constitution should be completed with the right of minorities to create an interest organisation with an independent media organ, responsible for the administration of Hungarian cultural life and school policy, the control of Hungarian staff policy, the protection of monuments, and the legal remedy for minority grievances. They demand that a stand should be taken officially in favour of recognising minority culture as an organic part of Hungarian culture and not some branch of Romanian culture. They also demand that special departments of minority education should be founded within the Ministry of Education and in the county school inspectorates, and the reintroduction of Hungarian nursery-schools, schools, and universities thus providing the opportunity for all Hungarian children to learn in their mother tongue, with special emphasis on the possibility of learning Romanian history and geography in Hungarian. Furthermore, they demand the enforcement of Law 6/1969 concerning teaching staff status, which stipulates that teachers who have no or only partial knowledge of Hungarian cannot teach Hungarian classes. They take a stand in favour of eliminating the criteria of a compulsory number of pupils in a class, in order to ensure the survival of rural Hungarian schools and ask for the adoption of the Yugoslavian minority Act which permitted the establishment of a school even in case of nine children. They demand that the minority publishing house Kriterion should have an extended sphere of competence and a more solid financial background so that it can perform the tasks ignored by other publishers. It is also stated that that the Hungarian press and Hungarian radio and television programmes should focus on relevant problems of the Hungarian minority. They also demand that the authorities cease to treat Hungarian intellectuals as suspicious elements and put an end to their permanent monitoring and harassment by the secret police for the sole reason that they are Hungarians. The last subparagraph demands real freedom of religion and the internal autonomy of Hungarian churches.

The third demand, detailed in three subparagraphs, calls for the autonomy of regions populated by a Hungarian majority – the so-called Székely (Szekler) Land – together with equitable representation in the government. The fourth point, also structured in three subparagraphs, requests the suspension of the Ceaușescu regime policy of changing the ethnic constitution of historical Transylvania, the Partium, and the Banat. The fifth point, including nine subparagraphs, requests for the Hungarians in Romania the possibility to create and develop their sense of identity, defined both by their past and by their present. The sixth paragraph demands that the free use of the Hungarian language – both formal and informal – should be equally justified in all areas of greater Transylvania which are also inhabited by Hungarians. Subparagraphs three and four formulates the claim that in settlements with mixed population, the teaching of the Hungarian language should be made compulsory in Romanian schools. In addition to this, they demand that such localities be provided with bilingual signs, including the names of settlements, streets, shops, factories, public institutions, museums, and product names.

The seventh point formulates the claim that the Hungarian minority should enjoy equal opportunities of self-fulfilment to the Romanians, and that professional development and the selection of employees should be performed according to qualification and not according to ethnic criteria. The eighth point underlines the need to preserve historical and cultural traditions, whereas paragraph nine refers to the Moldavian Csángós who were a Hungarian-speaking group. This paragraph asked that Csángós be considered also Hungarians, against the practice of the official statistics that considered them Romanians, and that they be allowed to participate in Hungarian cultural life. The tenth paragraph, in compliance with paragraph four of the “Memorandum,” demands that the competence to examine and decide in case of pressing issues concerning the situation of Hungarians in Romania should be assigned to an impartial international committee, comprising both Romanians and Hungarians.

Although the consideration of the interests of the Hungarian minority were a priority in formulating the “demands,” the editors were aware that “their consideration cannot be isolated from the solution of matters of general interest” and that “first and foremost the Romanians should have the competence” to draw international attention to the common issues. The editors did not consider this unusually harsh “measure” to be premature, arguing that, “it is high time the wall of silence were demolished and that the massive and seemingly indestructible practice of injustice and arbitrariness that haunts the entire population of Romania (with the exception of a few) as a nightmare were ultimately [denounced as] responsible for today’s totally catastrophic conditions.” They believed that the programme proposal also served the interests of the Romanians “as lawfulness would implicitly add to their rights.”

The eighth issue of Ellenpontok is the best-known issue of the samizdat to date. The “Memorandum” and “Programme Proposal” that it included are considered to be documents of historical significance, for they represented the most renowned documents of the Hungarian civil opposition in Romania at that time. In the course of time these two documents have been published on more occasions. In Hungary they were published in the well-known samizdat Beszélő, No. 5-6 (December 1982). In France, Párizsi Magyar Füzetek (Hungarian Brochure of Paris), No. 12 (1983) published an article under the title “What’s Happening in Transylvania?” and included the full “Memorandum” and excerpts from the “Programme Proposal.” These documents were also mentioned in the most prestigious papers in Austria, Germany, Switzerland, France, and Britain. Radio Free Europe broadcast the contents of the documents on several occasions, especially during the year 1982. The “Memorandum” and “Programme Proposal” were also included in Géza Szőcs’s volume Az uniformis látogatása (The visit of the uniform), published at the end of 1986 in New York. After the regime change the two documents were published on multiple occasions in the works of Antal Károly Tóth. It speaks for their value and significance that Éva Cseke Gyimesi included both documents in her 2009 volume Szem a láncban: Bevezetés a szekusdossziék hermeneutikájába (Piece in a chain: Introduction to the hermeneutics of Securitate files), “since the memory of these documents has faded and the younger generation know almost nothing about them.”