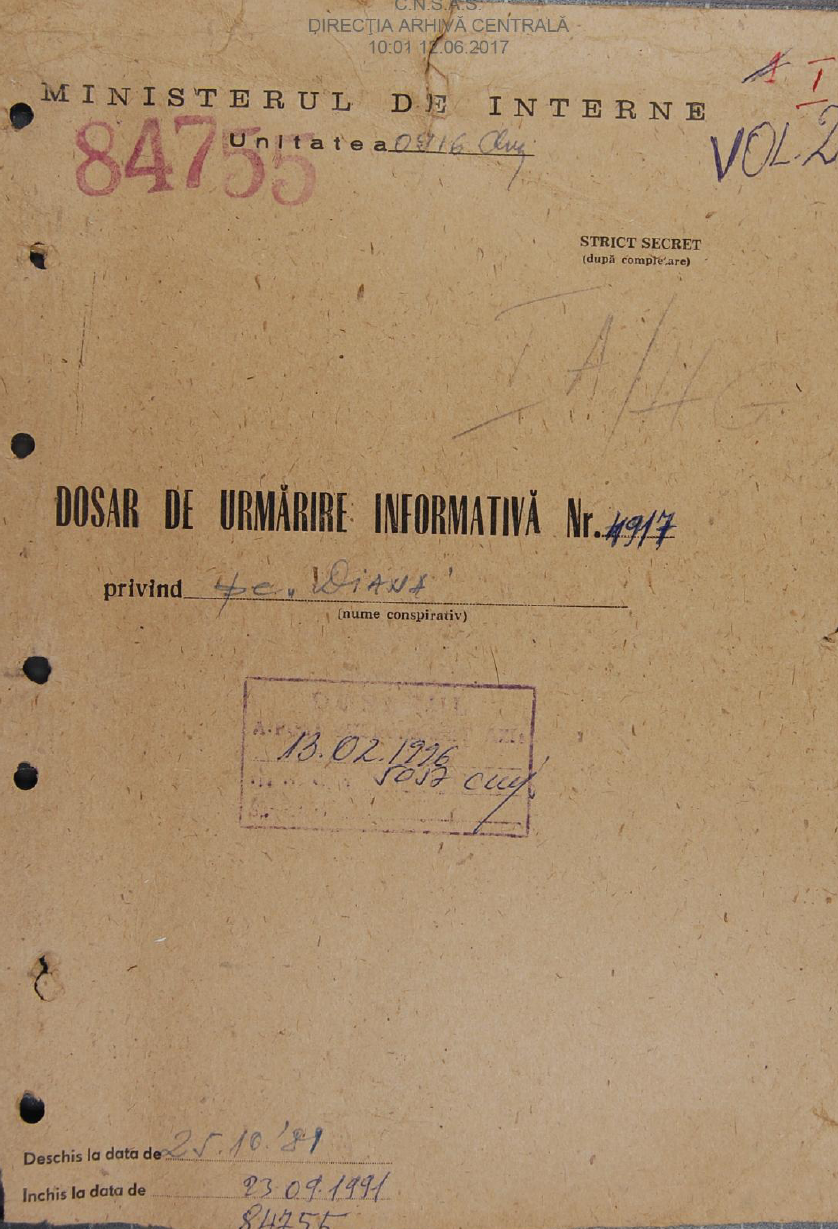 This document drafted in December 1986 is one of a series of open letters sent by Doina Cornea to Nicolae Ceaușescu. A copy of the letter was also sent to Radio Free Europe (RFE) and broadcast in January 1987 (Cornea 2006, 198). As Cornea confessed in her post-1989 interviews, despite the repression and the strict censorship, she tried to think and behave under communism as if living in a free society (Liiceanu 2006, 8–9). She considered that this behaviour was in accordance with her moral values, but also might play a transformative role in a society under dictatorship, because others would be encouraged to follow her example. Her strategy of opening a free dialogue with the authorities also illustrates also the profoundly democratic character of her inner convictions.

The ethical and cultural background of her open letters draws on two main sources: 1. the tradition of the Greek-Catholic Church (of which she was a member), banned by the communist regime in 1948, which functioned underground under communism despite the state repression directed at priests and parish members; 2. the influence exercised by the works of Mircea Eliade and Constantin Noica, both members of the so-called “generation of 1927” (Petrescu 2013, 309). During her teaching activity at the University of Cluj in the late 1970s and early 1980s, she tried to introduce a non-conformist bibliography that promoted different cultural models from those approved by the regime and encouraged free thinking among her students. Due to these attempts she lost her position in the Faculty of Letters in June 1983 (ACNSAS, FI 000 666, vol. 2, ff. 51–52).

If in other open letters she identified among the causes of the general crisis in Ceaușescu’s Romania the decay of cultural and moral values (ACNSAS, P 000 014, vol. 2, f. 73), in this letter Cornea drafts a plan to solve some of these problems by proposing a reform of the educational system. Thus, she starts her open letter by mentioning the fact that in her opinion some of the main problems of Romanian society under communism (“corruption”, “negligence,” and hypocrisy are caused by the “progressive degradation of the educational system” after 1948. Her criticism targets especially the following aspects of the Romanian educational system during the 1980s: the focus of the state authorities on technical education and the lack of investment in the humanities, the emphasis on memorisation and the failure to encourage critical thinking, and the lack of exigency and the encouraging of mediocrity due to the pressure on teachers from the state authorities (ACNSAS, P 000 014, vol. 2, f. 73).

She ends her open letter by proposing several measures for a future reform of the educational system: 1. depoliticising education; 2. “reconsidering all curriculums in the disciplines that have suffered deformations caused by the intrusion of the official ideology,  such as history, social sciences, literature, and philosophy”; 3. university autonomy; 4. more academic exchanges with foreign universities; 5. reform of teaching methods by paying more attention to “quality” and less to “quantity”; 6. “the re-establishment of those theoretical high-schools transformed into technical secondary schools”; 7. the reintroduction of the humanities in all secondary schools; 8. “the establishment of schools for ethnic minorities in proportion to their percentage in the total population”  (ACNSAS, P 000 014, vol. 2, f. 76).

During the home search in November 1987 when the letter was confiscated by the Securitate officers, Doina Cornea was asked to write on the recto side of the first leaf: “I am the author of this text,” and to sign for authentication (ACNSAS, P 000 014, vol. 2, f. 73). Like other letters confiscated during the home searches, this document was invoked during her interrogations at the Securitate in November and December 1987.