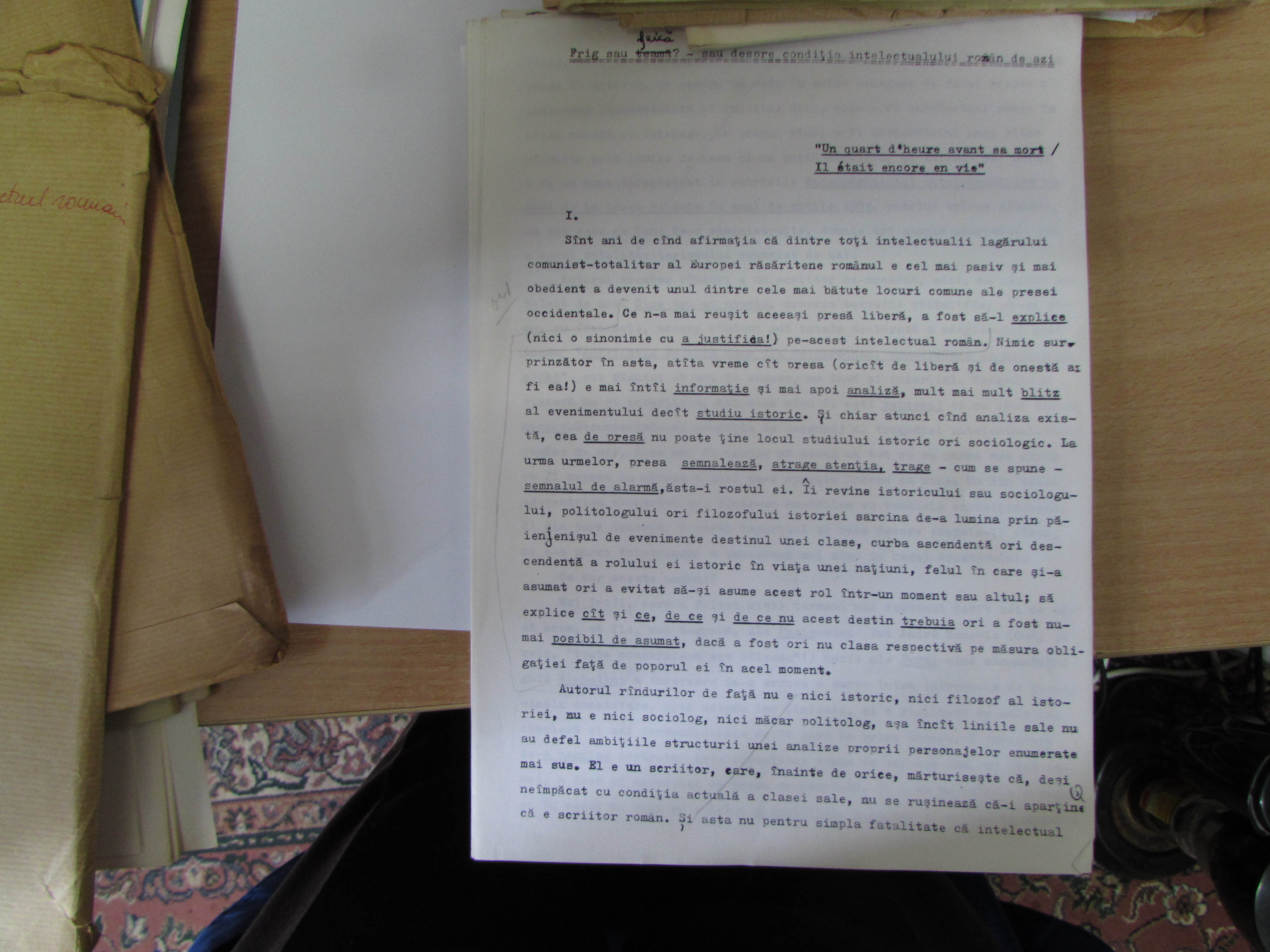 By late 1983, Dorin Tudoran espoused increasingly radical ideas regarding the total failure and essentially flawed character of the communist system as a whole, which he saw as irredeemable and deeply corrupt. He had already made his views public in 1983 in a series of interviews with various Western press outlets, expressing his conviction that Ceaușescu’s Romania was an absolute dictatorship and seeing the communist system as the main cause of the Romanian people’s material and moral decay. In his essay written in early 1984, Tudoran proposed a complex analysis of the role and situation of intellectuals in communist Romania. Tudoran focused primarily on the causes of his colleagues’ subservience and total submission to the communist regime. He found the roots of this phenomenon in the persecution and déclassement of this stratum by the communist authorities after 1945, comparing them systematically to their peers in Central Europe. Among the factors which generated compliance, Tudoran highlighted the specificity of local political traditions; the terror of the first decade-and-a-half of communism, which led to a mass “moral capitulation” of the intellectuals; their complete reliance on the state for professional survival; and the skilful manipulation of their upward social mobility by the communist authorities. However, Tudoran argued that the compliance of the absolute majority of intellectuals in Romania was, above all, a direct consequence of Ceauşescu’s personal rule and of the Romanian communist system. The essay concluded that Romanian intellectuals had to reassert their responsibility toward the broader society by emulating and following the lead of their predecessors from the generation of 1848, who had succeeded in breaking with the political traditions of subservience to the state and had emancipated themselves by embracing synchronicity with the West. Rejecting the notion of “resistance through culture” as inefficient and outdated, Tudoran pleaded for an alliance with other social groups on the Polish model. In his opinion, this was the only way to limit the abuses of the communist system, as long as total change was still inconceivable. This work, viewed at the time as the most radical text written by a Romanian dissident since Paul Goma, still represents the best and most convincing analysis of the Romanian intellectuals’ plight under communism produced by an “insider.” Mihnea Berindei received a typewritten copy of the original text, in Romanian, which he then forwarded to the editorial board of the journal L’Alternative, recommending it for publication. It was in fact published in French later that year (in two parts, the first in L’Alternative, no. 29, September–October 1984, pp. 42-50, and the second in the following issue). In a special note to the editors, Mihnea Berindei stated: “the text turned out to be longer than required. If possible, I suggest its publication in two parts. If not, I would very much like to […] keep its structure, including the mottos. In other words, at least something from all the chapters should be kept, since the text has a certain structure and ‘strategy.’ Maybe the complete version would be interesting for another periodical, if it is not interesting for the journal that suggested its writing […]. It’s good that the text exists. It could also be printed under another, more attractive title!” This clearly shows Berindei’s personal role in steering the text toward publication and his position of intermediary between authors writing in Romania and the Western public sphere. Despite the apparent initial hesitations of the editorial board, Tudoran’s text had a rather significant impact on the exile community and also prepared the ground for the emergence of similar critiques in the following years. This masterpiece highlights Mihnea Berindei’s contribution to the “journey” of this fundamental text of Romanian dissent toward its target audience in the West.