Letter from The Club of the Free Kings to Cornel Chiriac, 15 October 1971 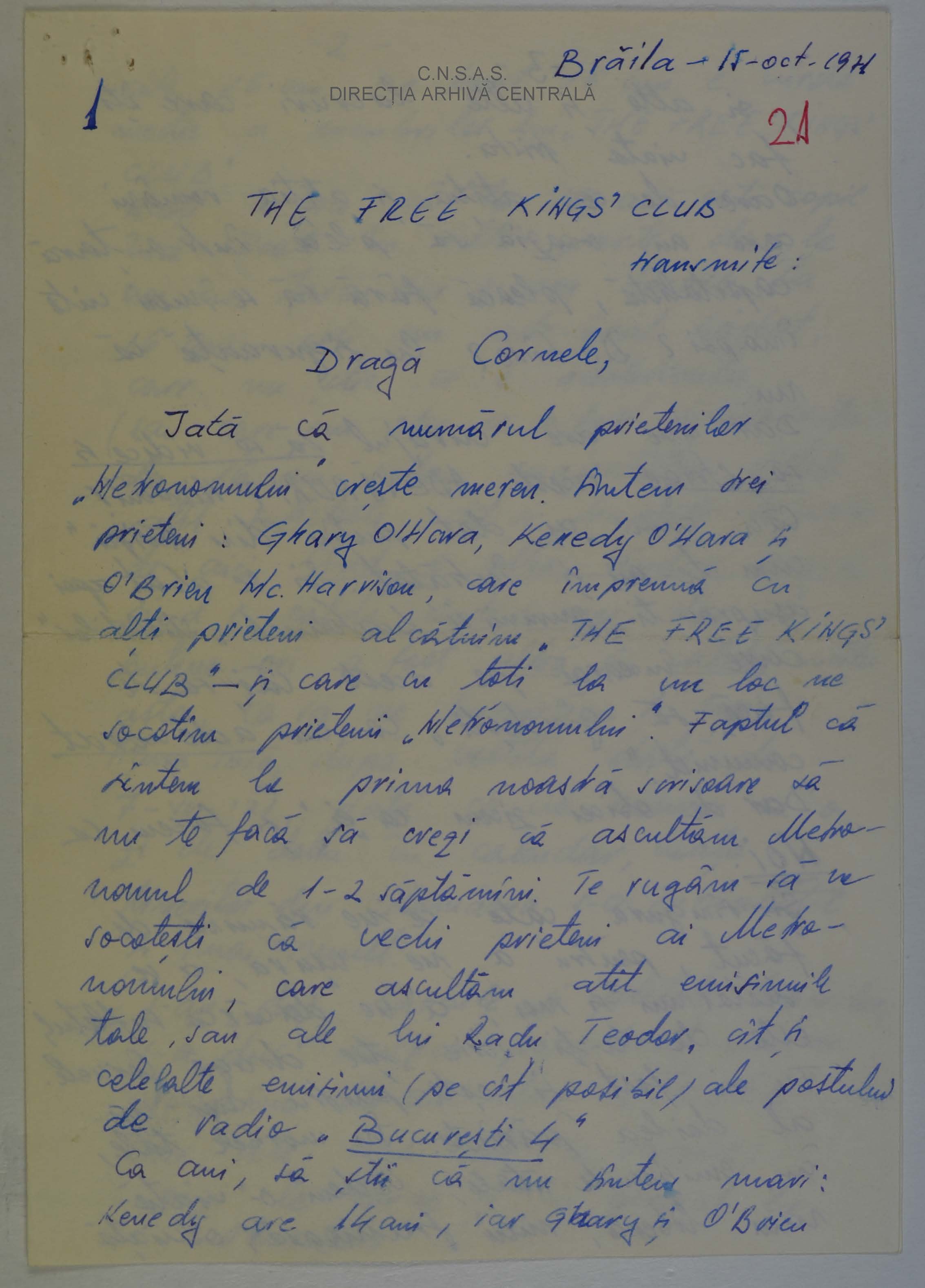 Dated on 15 October 1971, the letter was signed by three members of The Club of the Free Kings. The club was in fact a group of teenagers, fourteen to sixteen years old, who gathered occasionally in order to listen to foreign music. In order to distinguish themselves from their peers, each member of the group took an English nickname and decided to wear a yellow T-shirt with the group’s initials and a flower imprinted on it. They also made badges for themselves with the name of the club, their nicknames, and the word “hippy,” as they wanted to be identified as a hippy group. Because their favourite music programme at RFE was Cornel Chiriac’s programme Metronom, they decided to write him a letter on behalf of the group. In their message, these young people described the impact of Theses of July 1971, which imposed an embargo on foreign cultural products of all kinds: “After the famous date of 7 July 1971 [actually, Ceaușescu delivered his speech on 6 July], a date that will remain forever inscribed in the calendar as a day of mourning, the lives of young people in Romania worsened even more: gone were the beards and the long hair, gone was pop, beat or progressive music. Everything was gone!” (ACNSAS, Informative Fonds, file 3032 vol. 1, f.21). Their letter represented a quite radical criticism of the cultural policies of Ceaușescu’s regime and the economic difficulties the Romanians had to face in their daily life. Moreover, they considered Cornel Chiriac’s show Metronom to be an escape from the grim reality of their lives and a window to “a freer, more beautiful life, a life you would like to live.” In the final part of the letter, the signatories asked Cornel Chiriac to broadcast their favourite songs. Unfortunately for them, the Romanian secret police, the Securitate, intercepted the letter and subjected its authors to an investigation. In the end, the members of The Club of the Free Kings received a warning from the Securitate and had to sign a declaration in which they recognised their guilt and pledged not to get involved in similar activities in the future.