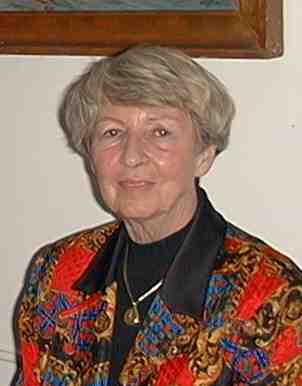 Ivana Tigridova was a journalist and human rights activist, a life partner of the journalist, writer and most prominent representative of the anti-Communist exile of Pavel Tigrid. She was born in Prague on November 4th, 1925 as Ivana Myšková, to a middle-class artistic family. Her grandmother from her mother's side was Terezie Brzková, one of the most prominent actresses of the First republic. Ivana Tigridová came from a Jewish family, so she had to leave English grammar school in Prague after the arrival of the Nazis. Her father was deported to Terezin first and then to Auschwitz, where he died in January 1945 on a death march. After the war, Ivana graduated from business School, on Resslova Street, where she managed to transfer after her dismissal from grammar school, and in a few months she completed her graduation at the Grammar School in order to take up Law at Charles University, which she did not complete.

In 1945 she met Pavel Tigrid, whom she married in February 1947. In 1947, Pavel Tigrid was followed by the Communist-controlled State Security, and should have been arrested on 23 February 1948. Tigrid was fortunate because he was abroad on a business trip. Ivana Tigridova was arrested shortly after the February 1948 coup and was imprisoned for three months. After her release, she soon escaped to her husband to Germany.

After leaving for emigration, they lived in Germany, where Pavel Tigrid built the Munich branch of Radio Free Europe and became its program director. Ivana began working with him in Radio Free Europe, working in the program department of the Czechoslovakian editorial office preparing the monitoring of the Czechoslovak press. In 1952, they relocated to New York and then to Paris in 1960, where Pavel Tigrid also transferred the quarterly Testimony Magazine, which he founded with his friends in 1956, and from which he became the most influential and successful Czechoslovak exile to start a magazine over time. His wife was also involved in his publishing.

In the 1970s, Ivana Tigridová began to work more intensively on human rights issues. In November 1974, he founded the Help and Action organisation, supporting persecuted representatives of cultural and political opposition in the Eastern Bloc countries. After the establishment of Charter 77, the creation of an International Committee to Support the Charter 77 Principles in Czechoslovakia was launched in Paris, which helped the Charter 77 signatories in their efforts to implement human and civil rights in the country.

After 1989, Ivana often returned to Prague and helped her husband, who became Advisor to President Václav Havel and later Minister of Culture of the Czech Republic. Ivana Tigridová died on 27 June 2008 in Héricy, Paris, where she had lived with her family for many years.