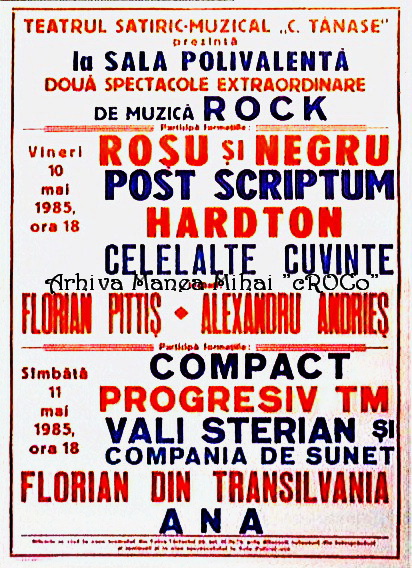 The poster gives details of two extraordinary concerts held on 10 and 11 May 1985 by some of the most appreciated rebel artists and rock groups of that period. Among the participants were the bands Roșu și Negru (“Red and Black”), Hardton, Post Scriptum, Celelalte cuvinte (“The Other Words”), Compact, Progresiv TM, Vali Sterian și Compania de Sunet, (“Vali Sterian and the Sound Company”), and the soloists Florian Pittiș and Alexandru Andrieș. All these participants were in the grey zone of tolerance admitted by the communist regime in Romania, and numbered among those that the younger generation considered nonconformist in comparison with the musical landscape of the period. The poster is not spectacular: on a white background, the text is printed in two colours, red and blue. The rock concerts announced by this poster were held in the Polyvalent Hall. Completed in 1974 and inaugurated under the name of “Palace of Sport and of Culture,” this hall was the largest performance space in Romania at the time, with a capacity of over 5,000 places. At both concerts, the auditorium was completely packed, due to the fact that they brought together an unusually large number of stars of nonconformist music. Such concerts with a very large audience posed a particular problem for the communist authorities, who were afraid that any crowd gathered at a performance might turn into a collective protest against the economic crisis, which was weighing more and more heavily on the population of Romania. The moment at which the concerts took place is also significant, because 1985 marked a turning point. On the one hand, for fear of revolt, such shows with large numbers of stars were not organised again after this event. On the other, the years that followed up until 1989 were the most difficult for the majority of people in communist Romania, who saw the growing discrepancy between their daily lives and those of people not only in the West but also in all the other communist countries.