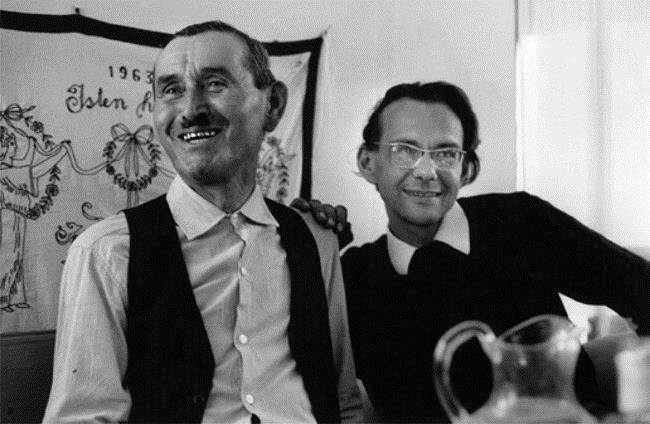 The bequest of György Martin contains his folk dance films and documents about them. Martin started to shoot films in the 1950s, and he wanted to use the best technical facilities for his work. He worked together with his wife Jolán Borbély and his stepson Péter Éri. They collected folk music and folk dances among Roma and travelled to Transylvania regularly. They remained in regular contact with Transylvanian dancers. Films were made by Martin, Jolán Borbély documented the collections, and Péter Éri recorded sounds on tapes.
In the years which followed, he began to work with Ernő Pesovár, Ferenc Pesovár, and László Maácz. Later, Bertalan Andrásfalyv also joined these tours. The trips were supported by the Folk Art Institute. Its head, Jenő Széll, provided his car and chauffeur. The Hungarian Academy of Sciences also supported these research trips. Martin, however, used his own equipment during the collecting and research work. These folk dance films provide essential and in many respects unparalleled insights into peasant culture in socialist Hungary. Martin and his friends started their work as collectors in an extraordinary era, when the political elite launched programs to transform traditional peasant culture radically. Private farmers lost their land due to collectivization, and many members of the younger generations had to find jobs in industry. Martin was an inventive researcher and active traveler. Several anecdotes tell of how they used organized state tourist agency (IBUSZ) trips to Transylvania.

His films about István Mátyás “Mundruc” (1911–1977) are the most famous of all. Martin always wanted to make films about the famous Transylvanian dance known as the “legényes” (lad’s dance) from Kalotaszeg (the aforementioned region in Transylvania, known as Țara Călatei in Romanian), so he travelled to Magyarvista (or Viștea by its Romanian name), where he met with Mundruc (Mundruc means nice or slim in Romanian). Martin thought that Mundruc was the most talented dancer in East Central Europe. He was not a just talented dancer, he was also very conscientious about drawing a clear distinction between traditional and modern dances. Martin stayed in touch with Mundruc for twenty years, and he studied the photos and films about him. Martin’s cooperative endeavor with Mundruc adhered to the principles of the research school established by Gyula Ortutay, which focused on personal character. Unfortunately, Martin was unable to finish his book about Mundruc because of his untimely death. His work was published in 2004 as a posthumous volume.