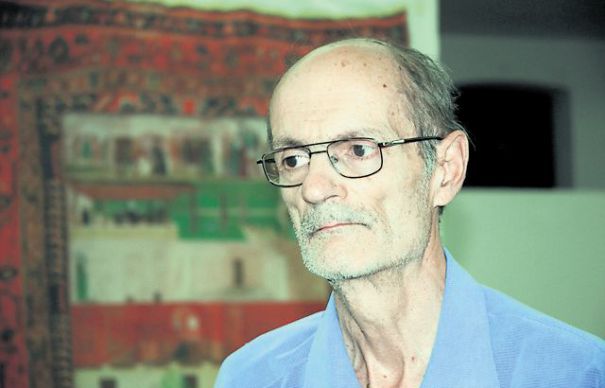 Ion Grigorescu (b. 15 March 1945, Bucharest) is a complex artist, who is continually experimenting and innovating in his art. Painter, draughtsman, photographer, and essayist, he is in known in the first place as one of the few multimedia artists in Romania. According to his own testimony, he chose art because he believed that it was a less ideological field, only to discover already as a student how much he had been mistaken. A graduate of the Nicolae Grigorescu Institute of Visual Arts in Bucharest in 1969, he became like all artists in communist Romania a member of the Union of Visual Artists in 1971, but he preferred to do what he liked rather than what was requested of him. According to the critic Erwin Kessler, Ion Grigorescu “is the Romanian artist who contributed most to the transformation of painting from a traditional practice to a conceptual artistic medium.” The fact that during communism he was an absolutely marginal figure gave him an extraordinary advantage, because it meant that he could experiment as he pleased. At the same time, he had to deal with the immense disadvantage of working completely outside the official network, without exhibitions, living from the sale of his works through the informal channels by which Sorin Costina came to him. In fact, Ion Grigorescu concentrated more on art forms such as photography and short films, at a time when these had an inferior status in relation to the traditional plastic arts and found no place in exhibition galleries.

Consequently, his experimental works only had a limited public under communism, and were generally presented only to his friends. Among them is Dialogue with Ceauşescu, a short film of 1978, presenting an imaginary and impossible conversation between the artist and the dictator. Ion Grigorescu plays both roles, wearing a mask to play Ceauşescu. The film is silent, with the conversation appearing written on the screen, starting with a sentence that has become famous: “If the people cannot lead, then it ought at least to criticise!” By the continuous rolling of the texts belonging to the two roles in two separate columns, the film subtly suggests the non-existence of dialogue between the dictator who leads according to his own wishes and the people whose criticism is ignored. Asked to what extent we can speak of an art of protest in works of Ion Grigorescu that became very well known only after the fall of communism, such as Dialogue with Ceauşescu, Sorin Costina emphasises that it was precisely the artist’s marginality that helped him to survive in a peripheral network: “Back then, no one saw him, His films were seen by approximately twenty people in Timişoara. And that was in the 1980s.”

It is interesting to note the episode concerning the portrait of Ceauşescu that was ordered from Ion Grigorescu in 1980, on the occasion of the dictator’s birthday. Instead of painting something conventional by pastiching official photographs, as was the usual practice, he painted a triple portrait, with three different views of Ceauşescu during his so-called “working visits” to various construction sites. When the painting was refused as being out of conformity with the official canons, Ion Grigorescu remade it, keeping only one of the three images but making the hands with which Ceauşescu was indicating  what was to be done on the site exaggeratedly small in relation to his height. Obviously this second version was not accepted either. Basically, the artist’s great achievement was to suggest, albeit through paintings that did not include any taboo elements as such, a critical reflection on the Ceauşescu regime.

After 1989, Ion Grigorescu became one of the most famous Romanian artists not only nationally but also internationally. His artistic creation is multi-faceted, but he is best known as a performance artist, a maker of film and video art, a photographer, and less as a painter, although his portfolio also includes paintings (including church paintings and icons). He is also the author of a number of essayistic and theoretical texts published in specialised journals. He has had over forty solo exhibitions and taken part in over 300 group exhibitions, and his works are to be found in the most famous art galleries in the world, including MOMA in New York, the Tate Gallery in London, and the Georges Pompidou Centre in Paris.