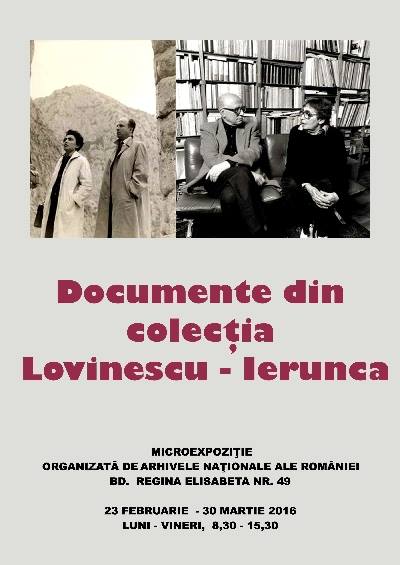 At the beginning of 2016, the Central National Historical Archives in Bucharest organised in the lobby of the institution a temporary exhibition with documents from the Lovinescu–Ierunca Collection. The event targeted not only researchers but also the public at large interested in discovering novel details about Monica Lovinescu and Virgil Ierunca’s activity in their Paris-based exile. The documents shown in the exhibition describe how Monica Lovinescu and Virgil Ierunca in their RFE broadcasts approached important events in the communist history of Romania, such as the death of the writer Marin Preda, who died in suspicious circumstances after his novel about repression was withdrawn from bookshops, the arrest of the Orthodox priest Gheorghe Calciu-Dumitreasa, who remained known for his anti-regime sermons, and the censorship of some writers who proved unwilling to collaborate with the regime (Editorial Historia 2016).