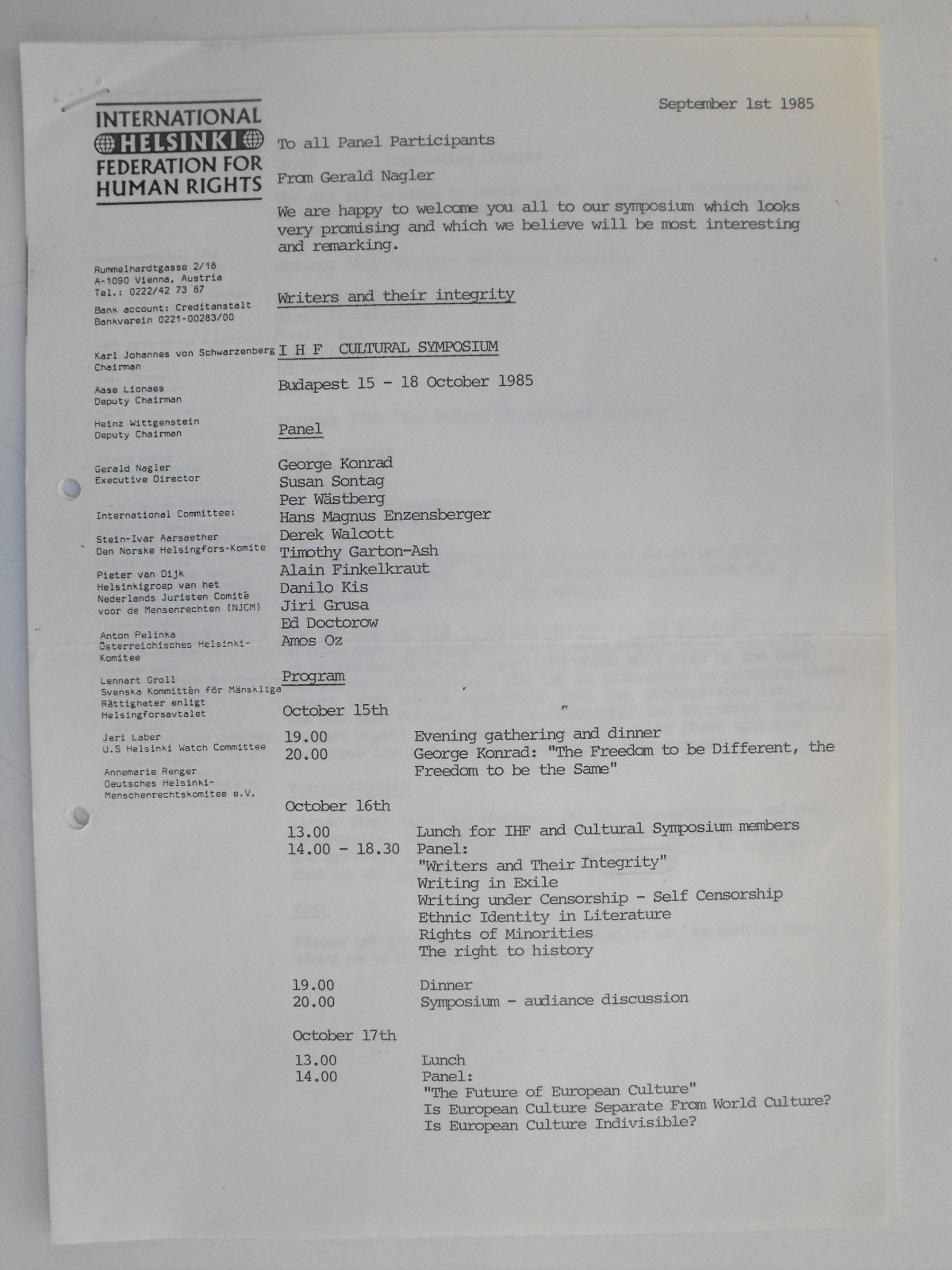 Although the plans and practical preparations for the alternative programs of the Budapest Cultural Forum 1985 had been started more than a year earlier, it was this invitation letter and program schedule sent to all Western participants by the International Helsinki Federation from its Vienna Office, an invitation signed by Chairman  Karl Joachim Schwarzenberg on 1 September 1985, that proved the success of devoted efforts made by the IHF staff to organize a three-day East-West Cultural Symposium in Budapest in parallel with the official opening session of the CSCE European Conference.

The main subjects of the alternative forum were much more challenging. They included “Writers and their Integrity” and “The Future of European Culture,” and they offered a good opportunity for free and stimulating exchange of ideas for participants from both East and West. The list of authors invited seemed quite imposing, as it included prominent figures such as György Konrád, Susan Sontag, Per Wἃstberg, Hans Magnus Enzensberger, Derek Walcott, Timothy Garton Ash, Alain Finkelkraut, Danilo Kis, Jirzi Grusa, Ed Doctorow, and Amos Oz. This forum was perhaps the first chance since 1945 for writers from both East and West to enter free public debates on sensitive cultural and political issues such as exile, censorship, self-censorship, the role of national identity in literature, the rights of minorities, the right to history, or the basic question of whether European culture is separate from world culture. And is European culture really one indivisible culture? These questions and issues represented an utterly new approach which regarded cultural freedom as a vitally important and integral part of the overall realm of human rights.

How did the Budapest “Cultural Counter-Forum” manage to implement the promising plans made by the IHF? Not quite as was expected. Apart from Hungarians, no other participants from Eastern Bloc countries could attend the symposium, either because they could not get passports or because of the were forced to live under police surveillance or under house arrest, or they had been interned or jailed, like many Russian, Polish, Czech, Slovak, and Romanian writers at the time. They were partly represented by some Western writers with Eastern origins, e.g. Jirzi Grusa, Danilo Kis, and Amos Oz, and Timothy Garton Ash, who came from Warsaw to Budapest, spoke for the Polish writers who at the time were still suffering from the harsh measures of martial law. Things were similar in the case of writers who belonged to ethnic minorities. Hungarian participants, like poet Sándor Csoóri and philosopher Gáspár Miklós Tamás, spoke on their behalf, as did two of the most harassed writers and samizdat makers, Géza Szőcs, who was originally from Cluj / Kolozsvár / Klausenburg, and Miklós Duray from Bratislava / Pozsony / Pressburg. Szőcs and Duray addressed open letters to the participants in the Counter-Forum

How many people took part in the forum? As many people (120–150) as could fit in the crowded private Budapest flats provided for the event by poet István Eörsi and film director András Jeles. These people were IHF representatives, writers, journalists, Western diplomats, Hungarian intellectuals, and students. This constituted an unanticipated change which gave the Counter Forum a fairly informal and non-conformist feel. The Hungarian authorities refused to allow the group to hold its gathering in any public place, and the reservation made by the IHF for a conference room in a downtown Budapest hotel was cancelled at the last moment by the Hungarian secret police. On the very first day of the six-week-long official Forum, this scandal, which was reported on by the world press and some Western delegates, all of a sudden drew attention to the Counter-Forum, highlighting the fact that cultural affairs are still sensitive political issues in the eastern part of Europe.