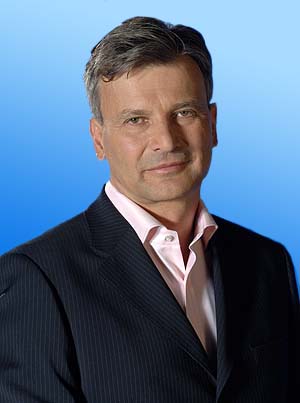 Gábor Demszky (1952-) lawyer, sociologist, politician, he was a member of the democratic opposition during the 1980s, a key figure in the samizdat publishing, founder member of the Szabad Demokraták Szövetsége (SZDSZ) („The Alliance of Free Democrats”).

Gábor Demszky comes from an economist-family in Budapest, his parents were the members of that reformer economist generation which did not think about economic processes in the Marxist way. This origin influenced his mindset and attitude to the communist system. He graduated from Eötvös Loránt University. In 1972, he was banned from the university because of a demonstration what finally was not held. During this time he was working as a cab driver and a librarian and at this time he wrote his first sociological study. After his graduation, he made interviews, questionnaires in the countryside for some research institute. Thanks to this work he got insight into the life of Hungarian villages. His expulsion made difficult to find a job. He worked for Világosság journal from 1976 to 1981.

The socialist invasion to Czechoslovakia in 1968 was a milestone in forming of his mindset. This aggressive step resulted in his disappointment in the existing socialism but he believed that the system is reformable. The critics of the system were left-sided thinkers, he was interested in the new left movement, the anarchist syndicalism in these years. The 1970s brought a big change, he turned away from Marxism. He explained this with his meeting with the reality of the Hungarian countryside and the real results of the communist redistribution politics. He confessed that not only the realization of the Marxist philosophy but the thinking itself is wrong.

In the 1970s the liberal ideas shaped his activity. Demszky highlighted Adam Michnik’s work titled New Evolutionism in his interview, this essay inspired him and his fellow to establish independent organizations, press, movements. They thought the reform communism was not the proper way, they had to press to the system from outside and gained its change.

He was very active as a key man of the inner circle of oppositional intellectuals. We find his name among the founders of the Szegényeket Támogató Alap (SZETA)/ Fund For The Support Of The Poor, the subscribers of the Charta 77 declaration.

In 1981, he together with Jenő Nagy és László Rajk jr. established the AB Independent Publisher which dealt with political, literature books. Two years later started the journal of Hirmondó („The Messenger”) edited by Demszky. Between 1983 and 1988 26 numbers were published. The aim was to write about the democratic intentions in the Eastern-European countries. Besides this, he participated in the editing of other samizdat journals, too.

The Polish actions had a great impact on him as on his fellows as well. In 1981 he traveled to Poland, get a connection with the oppositional members and learn his samizdat producing techniques.

In his interview, Demszky talked about the fault lines among the different groups of opposition, for example, related to the judgment of the Revolution of 1956.

During the samizdat publishing activity, the police held house search at Demszky’s flat on more occasion as the other prominent persons’ house as well. In 1983 he was sentenced to 6 months because of violence against an official person but it was suspended for 3 years. In the same year, he was awarded a grant of a Freedom to Publish by the International Accessories of Publishers. In 1988 he was a founder member of Szabad Kezdeményezések Hálózata („Network of Free Initiatives”) and Szabad Demokraták Szövetsége (SZDSZ) („The Alliance of Free Democrats”). He was the senior mayor of Budapest from 1990, he was reelected four times.