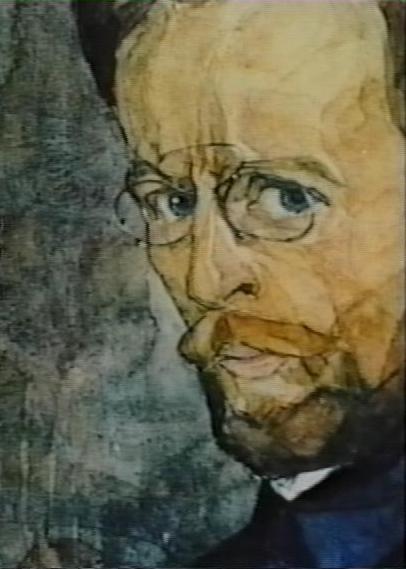 Oleksandr Bohomazov was born on March 27, 1880 in the village of Yampol, in the Kharkiv guberniia of the Russian Empire (now Sumy oblast in Ukraine). He studied at the agricultural school in Kherson (1896–1902), then at Kyiv Art School (1902–05). Due to his participation in a student strike, Bohomazov was expelled from the school in 1905-1907. In the summer of 1906, he painted “en plein air in the Crimea, then he worked in Moscow in the studios of Fyodor Rerberg and Konstantin Yuon (1907–08). Initially, his art was influenced by Symbolism, particularly by the work of Viktor Borisov-Musatov.”  In 1908, Bohomazov participated in an exhibition in Kyiv titled “Zveno” (or “section” in Russian), along with David Burliuk, Mikhail Larionov and Aleksandra Ekster. While studying at Kyiv Art School, he became fascinated by impressionism and some of his later works were influenced by Scandinavian modernism. By 1912, Bohomazov became involved in Futurist pictorial theory and practice, participating in an exhibition called “Kil’tse” (or “ring”) in Kyiv in 1913. This same year he married Vanda Monastyrska, who would be his companion for the rest of his life.

The following year, there was a palpable shift in Bohomazov’s perspective, as reflected in the treatise he wrote on painting and its elements. Prof. Myroslava Mudrak notes “constituted his formulations of the new Futurist art.” During 1922-1930, he taught “fortech” (formal-technical) subjects at the Kyiv Art Institute, known then as the Institute of Plastic Arts. In his theoretical treatise “Painting and Elements” (1914), Bohomazov foreshadowed ideas concerning objectless art, later formulated by Kazimir Malevich and Vasilii Kandinsky. In 1915-1917, he taught in a provincial school at Heriusy (today Nagorno Karabakh). It was there that his "expressionist sensibilities were aroused by the mountainous surroundings and blended with his Futurist focus on quantitative and qualitative rhythms," the core idea of his 1914 treatise.

After the October Revolution of 1917, Bohomazov played an active role in newly formed artistic organizations. In 1919, he worked alongside fellow artists, like Oleksandra Exter and others, to decorate streets and trains in Kyiv with Futurist designs. In 1920, Bohomazov helped create an agitprop hospital train as well as the steamer “Pushkin” for the 12th Army. He became seriously ill at the front and battled tuberculosis until the end of his life. In 1922, Bohomazov became a professor of easel painting at the newly formed Institute of Plastic Arts in Kyiv, but in the years 1923-1926 spent long periods in Crimea to combat tuberculosis. By 1927, his work became more figurative, culminating in the work "Sawyers," a triptych in which he strove to synthesize figurative and Futurist art. One of the paintings from this series was displayed at the retrospective Ten Years of October 1917-1927, the same year his treatise of 1914 became part of the curriculum at the Kyiv Art Institute, where Bohomazov worked until his death in 1930. The institute was the "last bastion of modern art before the onslaught of Socialist Realism," and afterward Bohomazov's work was critiqued as too "formalist."  Only in 1966 was a retrospective of his life's work held in Kyiv.