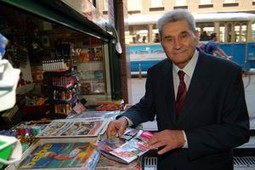 Božidar (Božo) Novak (Hvar, 18 May 1925 – Zagreb, 26 June 2013) was a Croatian journalist and current affairs writer, also active in other areas of public life. According to the biography in his book Hrvatsko novinarstvo u 20. stoljeću [Croatian journalism in 20th century], after attending the classics gymnasium in Split and Zagreb, in 1946/1947 he graduated from the Faculty of Political Science in Belgrade, majoring in journalism and diplomacy. He studied law at the Faculty of Law of the University of Zagreb. He studied journalism in Salzburg (American Studies Training) and specialised during study tours in England, the USA, Austria, Italy, Czechoslovakia, the USSR and Japan.

He began his career in journalism in May 1945 in the newspaper Slobodna Dalmacija in Split. He wrote news, features, commentaries, foreign policy reports and travel pieces. He worked as the editor-in-chief of Slobodna Dalmacija, the domestic affairs editor in the Jugopress news agency and for Vjesnik, serving as editor-in-chief of that paper Vjesnik from 1955 to 1963, and as director of the Vjesnik publishing and printing company from 1963 until the end of 1971. After assuming the latter post, he initiated the creation of Vjesnik’s newspaper documentation collection for the operational needs of that newspaper company and its editorial departments. He served two terms as the president of the Croatian Association of Journalists and the Union of Yugoslav Journalists, and in period 1966-1969 he was a delegate in the Parliament of the Socialist Republic of Croatia.

In the 1960s and early 1970s, during the Croatian Spring, he criticized the communist regime through his public work. This is why in period 1972-1990 he was banned from engaging in any journalistic or public activity. He wrote about this in his aforementioned book on Croatian journalism in 20th century, and when it was published, he spoke about it in length in an interview for the newsmagazine Nacional in June 2005. In his own words, the first open confrontation with the regime came in 1962, when at the plenum of Yugoslav journalists in Pristina on 16 and 17 April of that year, on behalf of Croatian Association of Journalists, he requested the breaking up the federal unified information system, abolition of the division into federal, republic and provincial newspapers and media, rejection of the doctrine on the “press as the voice of the communist party” and Moša Pijade’s assertion on the “journalist as an general ignoramus”, as well as the request for abandonment of the party directive stipulating that Yugoslav newspapers should not engage in mutual polemics. As a particular period of crisis for Croatian journalism and the media in general, he further specified 1969, under circumstances of normalisation of relations between Yugoslavia and the USSR, harmed in the preceding year by the Soviet intervention in Czechoslovakia. At the time, Vjesnik wrote critically about the presence of the Soviet fleet in Croatian territorial waters, ports and shipyards. Thereupon, as a condition for normalization of transnational and party relations, the Soviet communist party and government requested control of the press, especially Vjesnik, on the grounds that it was anti-communist. At a meeting with Josip Broz Tito on the Brijuni islands on 16 June 1969, which was also attended by media directors, Novak, as the president of the Union of Yugoslav Journalists, rejected Kardelj’s bill on information which stipulated stronger influence of the communist party on the media, and advocated
the further opening and liberalization of the press. That same year, he refused to print texts  in Vjesnik about the Andrija Hebrang case, which was reviewed and approved for print by Tito himself. He further said that in the spring of 1971 he refused the federal leadership’s request for removal the Vjesnik’s editor-in-chief, Milovan Baletić, because of the “Croatian spy affair”, a ploy  by which the federal intelligence agencies attempted to compromise the Croatian national democratic political leadership on charges of collaboration with Branko Jelić’s Ustasha/émigré centre in Berlin. At the end of 1971, due to the suppression of the Croatian Spring and repression against its participants, Novak was forced to retire, as he pointed out itself, with a “very extensive media slander campaign.” First he resigned from the party, and then as a director of Vjesnik. Condemning his work, the party organization in Vjesnik suggested his arrest on charges that was a “participant in the maspok [mass movement], a counter-revolutionary, a techno-manager, a rotten liberal who defies Tito and Bakarić.”

For a period of 18 years (1972-1990) in which he was banned from engaging in any journalistic or public activity, he recounted that he spent time fishing, reading books and clipping articles from newspapers. With the support of his father’s friend Grga Novak (Hvar, 2 April 1888 – Zagreb, 7 September 1978), a Croatian historian and archaeologist, and then president of the Yugoslav Academy of Arts and Sciences, he researched and wrote about the history of Hvar’s fisheries in the Middle Ages. Looking back to that, dissident, time, he said he was “professionally killed and then left to live.”

After 1990 he once more began participating is public life, actively standing up for media freedom and democratic values through engagement in civic organisations: the Croatian Association of Journalists, the Civic Initiative for Freedom of Public Speech, the Croatian Helsinki Committee for Human Rights, the Open Society Institute, Miko Tripalo Centre for Democracy and Law. In 2005, he received the Miko Tripalo Award for his contributions to the development of democracy and press freedom, and in 2010 the Croatian Helsinki Committee for Human Rights honoured him with its Lifetime Achievement Award.

He has written and published several books and approximately fifty technical papers about the history of journalism and about issues pertaining to journalism and the protection and promotion of press freedoms.